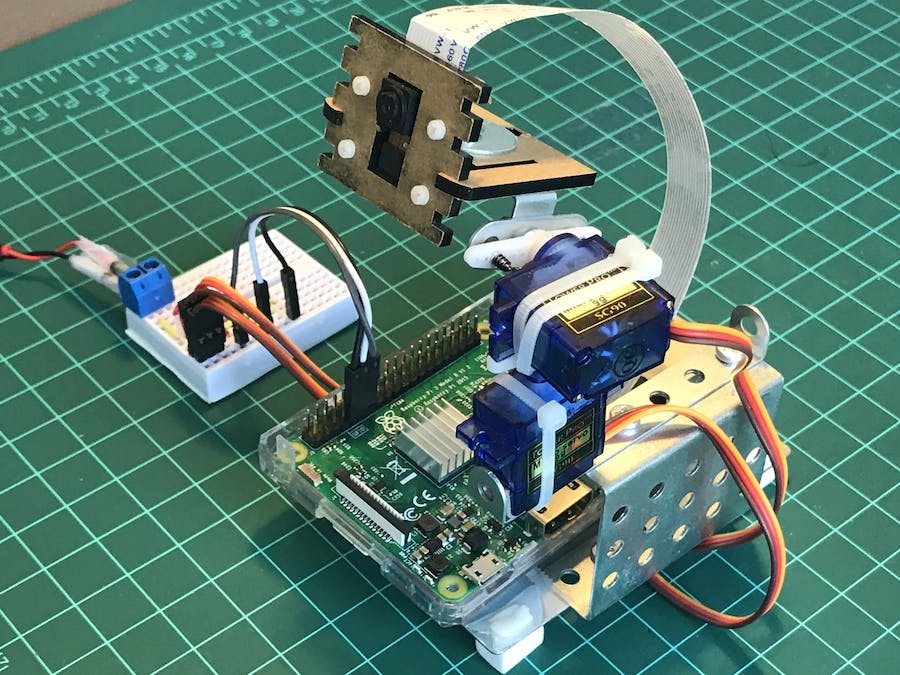 On this tutorial, we will explore how to control multiple servos using Python on a Raspberry Pi. Our goal will be a PAN/TILT mechanism to position a camera (a PiCam).

Here you can see how our final project will work:

(*) you can buy a complete Pan/Tilt platform with the servos or build your own.

The Raspberry Pi has no analog output, but we can simulate this, using a PWM (Pulse Width Modulation) approach. What we will do is to generate a digital signal with a fixed frequency, where we will change the pulse train width, what will be "translated" as an "average" output voltage level as shown below:

We can use this "average" voltage level to control a LED brightness for example:

Note that what matters here is not the frequency itself, but the "Duty Cycle", that is the relation between the time that the puls is "high" divided by the wave period. For example, suppose that we will generating a 50Hz pulse frequency on one of our Raspberry Pi GPIO. The period (p) will the inverse of frequency or 20ms (1/f). If we want that our LED with a "half" bright, we must have a Duty Cycle of 50%, that means a "pulse" that will be "High" for 10ms.

This principle will be very important for us, to control our servo position, once the "Duty Cycle" will define the servo position as shown below:

The servos will be connected to an external 5V supply, having their data pin (in my case, their yellow wiring) connect to Raspberry Pi GPIO as below:

You can have as an option, a resistor of 1K ohm between Raspberry Pi GPIO and Server data input pin. This would protect your RPi in case of a servo problem.

The first thing to do it is to confirm the main characteristics of your servos. In my case, I am using a Power Pro SG90.

From its datasheet, we can consider:

In theory, the servo will be on its

To program a servo position using Python will be very important to know the correspondent "Duty Cycle" for the above positions, let's do some calculation:

Let's test the servos individually. For that, open your Raspberry terminal and launch your Python 3 shell editor as "sudo" (because of you should be a "super user" to handle with GPIOs) :

Import the RPI.GPIO module and call it GPIO:

Define which pin-numbering schemes you want to use (BCM or BOARD). I did this test with BOARD, so the pins that I used were the physical pins (GPIO 17 = Pin 11 and GPIO 27 Pin 13). Was easy for me to identify them and not make mistakes during the test (In the final program I will use BCM). Choose the one of your preference:

Define the servo pin that you are using:

If Instead, you have used BCM scheme, the last 2 commands should be replaced by:

Now, we must specify that this pin will be an "output":

And, what will be the frequency generated on this pin, that for our servo will be 50Hz:

Now, let's start generating a PWM signal on the pin with an initial duty cycle (we will keep it "0"):

Now, you can enter different duty cycle values, observing the movement of your servo. Let's start with 2% and see what happens (we spect that the servo goes to "zero position"):

In my case, the servo went to zero position but when I changed the duty cycle to 3% i observed that the servo stayed in the same position, starting to move with duty cycles greater than 3%. So, 3% is my initial position (o degrees). The same happened with 10%, my servo went above this value, topping its end on 13%. So for this particular servo, the result was:

After you finish your tests, you must stop the PWM and clean up the GPIOs:

The below Terminal print screen shows the result for my tilt servo:

And here the result for the second servo, Pan:

Note that both have similar results)Your range can be different.

The PWM commands to be sent to our servo are in "duty cycles" as we saw on the last step. But usually, we must use "angle" in degrees as a parameter to control a servo. So, we must convert "angle" that is a more natural measurement to us in duty cycle as understandable by our Pi.

How to do it? Very simple! We know that duty cycle range goes from 3% to 13% and that this is equivalent to angles that will range from 0 to 180 degrees. Also, we know that those variations are linear, so we can construct a proportional schema as shown here:

So, given an angle, we can have a correspondent duty cycle:

Keep this formula. We will use it in the next code.

Let's create a Python script to execute the tests. Basically, we will repeat what we did before on Python Shell:

The core of above code is the function setServoAngle(servo, angle). This function receives as arguments, a servo GPIO number, and an angle value to where the servo must be positioned. Once the input of this function is "angle", we must convert it to duty cycle in percentage, using the formula developed before.

When the script is executed, you must enter as parameters, servo GPIO, and angle.

The above command will position the servo connected on GPIO 17 with 45 degrees in "elevation".

The file angleServoCtrl.py can be downloaded from my GitHub

The below picture shows how the Pan/Tilt mechanism works:

During our development we will not go to "extremes" and we will use our Pan/Tilt mechanism from 30 to 150 degrees only. This range will be enough to be used with a camera.

Let's now, assembly our 2 servos as a Pan/Tilt mechanism. You can do 2 things here. Buy a Pan-Tilt platform mechanism as the one shown on the last step or build your own according to your necessities.

One example can be the one that I built, only strapping the servos one to another, and using small metal pieces from old toys as shown in the photos :

Once you have your Pan/Tilt mechanism assembled, follow the photos for full electrical connection.

We will not explore on this tutorial how to set-up the camera, this will be explained on next tutorial.

Let's create a Python Script to control both servos simultaneously:

When the script is executed, you must enter as parameters, Pan angle and Tilt angle. For example:

The above command will position the Pan/Tilt mechanism with 45 degrees in "azimuth" (Pan angle) and 120 degrees of "elevation" (Tilt Angle). Note that if no parameters are entered, the default will be both, pan and tilt angles set up to 90 degrees.

Below you can see some tests:

The servoCtrl.py file can be downloaded from my GitHub.

The program will execute automatically a loop from 30 to 150 degrees in both angles.

I connected an oscilloscope only to illustrate the PWM theory as explained before.

The above code, servoTest.py can be downloaded from my GitHub.

As always, I hope this project can help others find their way into the exciting world of electronics!

Below a glimpse of my next tutorial:

Saludos from the south of the world!

See you in my next tutorial!