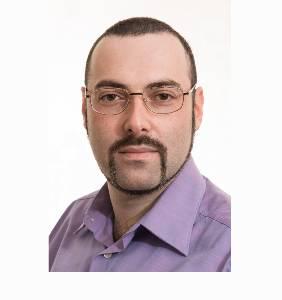 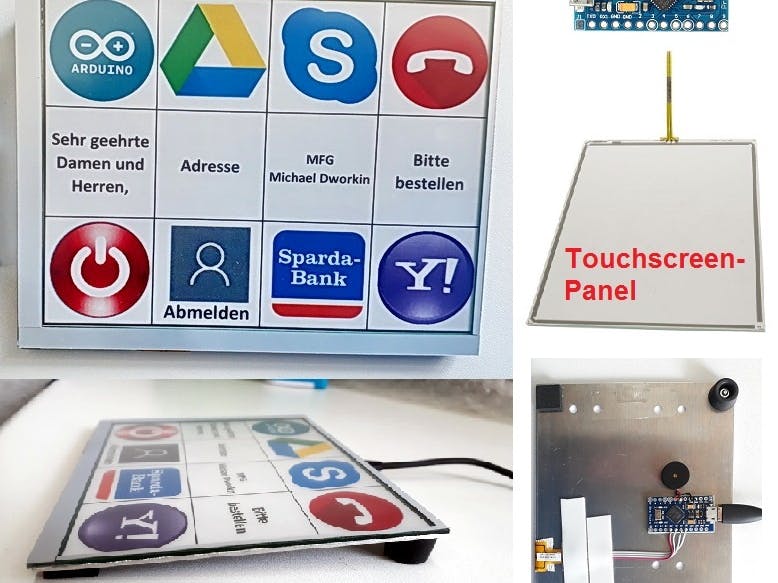 Glue any resistive touchscreen panel to a hard surface on the edge on 2 sides with double-sided adhesive tape. Create a table in Excel with dimensions of the touch area. Find suitable icons on the Internet and paste them into the cells of the table. Cut out the printed table and insert it between the base and the touch panel from the side. On the back of the USB macro keyboard, the Pro Micro module is glued to ATmega32U4 (similar to the Arduino Leonardo board) and a piezo transducer. This is the hardware ready. This is a very light DIY craft project that even a beginner in electronics can build himself. The wiring diagram contains only 3 components. It is also very cheap piece of work. Resistive Touch Screen Digitizer Glass 155mm 88mm costs for example at 5.36 € Pro Micro module costs eg with Aliexpress 3.30 € Piezo 0, 70 € The total cost of the self-made USB shortcut keyboards to 9.36 €

I have inserted a piezo buzzer in the circuit in order to realize an acoustic message of an actuation of the button.

After pressing on a touch field, a quiet crackling noise is generated.

At the piezo 5V and 0V are changed with each actuation.

Calibration of the resistive touchscreen panel

At first use, the Arduino USB Keyboard should be calibrated once.

You will be asked to print once at the top left and bottom right.

Best Make the corner of the outside edge of the table on the paper underlay.

The calibration values ​​are stored permanently in the EEPROM.

When reloading the sketch, they are also preserved.

By sending the "r" characters, a mode is activated in which the raw data is output via the serial interface for debugging purposes.

One time X / Y values ​​of the AD converter and the converted values ​​of columns and rows No of the cell in the table.

The programming of the USB macro keypad

At the beginning of the sketch, a two-dimensional string array is created.

You can decide for yourself how many keys you want to place on the Touch Keypad.

Prerequisite is the touch area should still be lightly hit by the finger.

The texts in the data string are transmitted to the computer directly after the touch button is pressed, as if they were typed.

To save keyboard shortcuts and macros I have provided 4 script commands.

Each script command begins with "§" characters and ends with "" spacebar characters.

The texts in the data string are transmitted to the computer directly after the touch button is pressed, as if they were typed. To save keyboard shortcuts and macros I have provided 4 script commands. Each script command begins with "§" characters and ends with "" spacebar characters.

Create a custom layout for the TouchPad with Excel