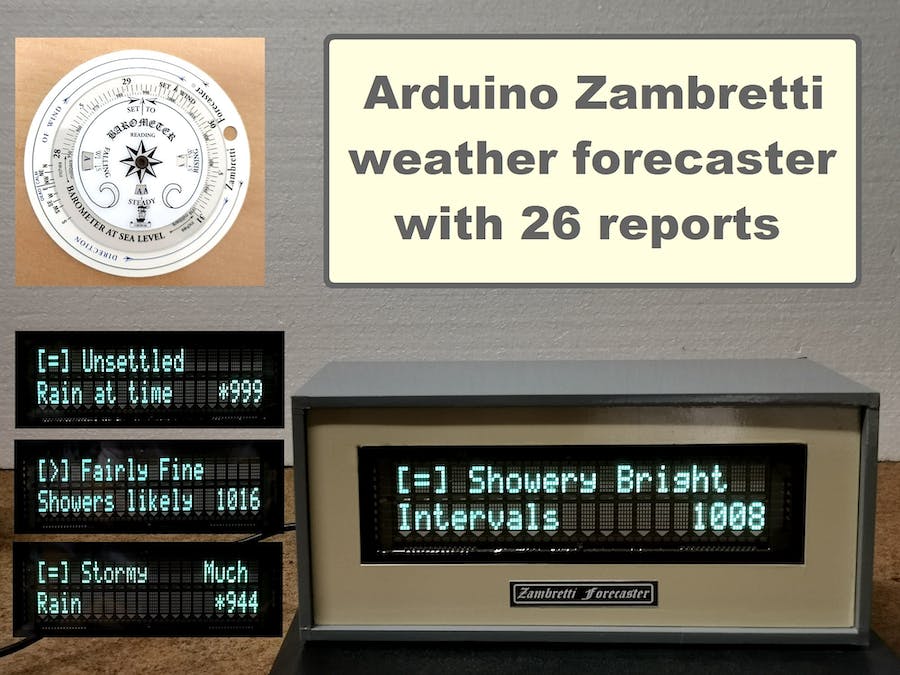 In one of my previous videos, I described how to make a cheap Advanced Barometer, used by sailors, yachtsmen, etc. It is a great weather forecasting device but still requires some knowledge in the field of meteorology.

The original Zambretti Forecaster was developed in 1915 by precision instrument makers Negretti and Zambra. It was a hand-held disc calculator, that provided on-demand short-term forecasts of up to 12 hours. It consists of 3 plastic discs of descending radius, arranged concentrically and secured together by means of a rivet. The large outside disc A has a short scale calibrated in wind direction, the middle disc B, has an index to be aligned appropriately with the wind direction scale on A, and itself carries a scale calibrated in units of barometric pressure (inches of mercury or millibars). The inner disc C has an index settable to the atmospheric pressure on B and three windows which allow the selection of a reading based upon of the rising or falling of the barometer in Winter or Summer. Through the appropriate window, an alphabetic letter is visible ( printed on disc A) and this letter is the key to the forecast which can be read off on the obverse side of the instrument. It is reported that the forecasts are most accurate when generated at 9.00 am local time. The calculator uses the mean sea level pressure (MSLP) and pressure trend (steady, rising or falling) as the primary input. The season (Summer or Winter) and the wind play a minor role in determining the forecast.

This device was an electronic version of this calculator that automatically generates reports on the display. It is very simple to make and consists of several components:

Also in one of my previous videos I showed you how to control an unknown VFD display via a tx-rx connection with Arduino (https://www.youtube.com/watch?v=FZi8vyAs57w&t=83s).

DS3231 Realtime clock module serves only to determine the season (winter or summer). Of course with very small changes in the code this device can be made with a 16x2 LCD display which is much easier to control. As a basis, I used Fandonov's code for an e-paper weather station (https://github.com/fandonov/weatherstation/)

Immediately after switching on, a short time report and the current value of the Relative Atmospheric Pressure appear on the screen. This weather report is based on momentary pressure and is not realistic. The first realistic weather report appears after one hundred minutes and is updated every 10 minutes. The current Relative Atmospheric Pressure is displayed in the lower right corner and is updated every minute. There are a total of 26 weather forecasts that describe in detail what the weather will be like in the next 12 hours:

I should also mention that the code should include the altitude of the place where the device is located, in the row:

int altitude = 723; // Here you should put the REAL altitude

Also in the upper left corner, there is a sign that shows us the trend of atmospheric pressure (raising, steady, or falling).

Finally, the device is built into a suitable box made of PVC board coated with self-adhesive colored wallpaper. 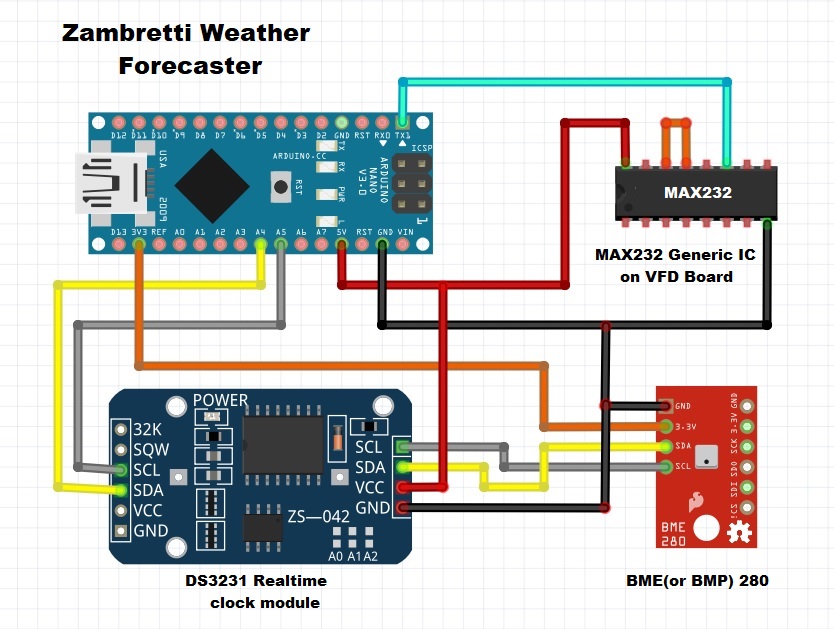