Created with an Arduino, CNC shield, and 3 CD drives (X, Y, and Z). The frame is made out of two dowel rods and a laminate shelf.

Created with an Arduino, CNC shield, and 3 CD drives (X, Y, and Z). The frame is made out of two dowel rods and a laminate shelf. 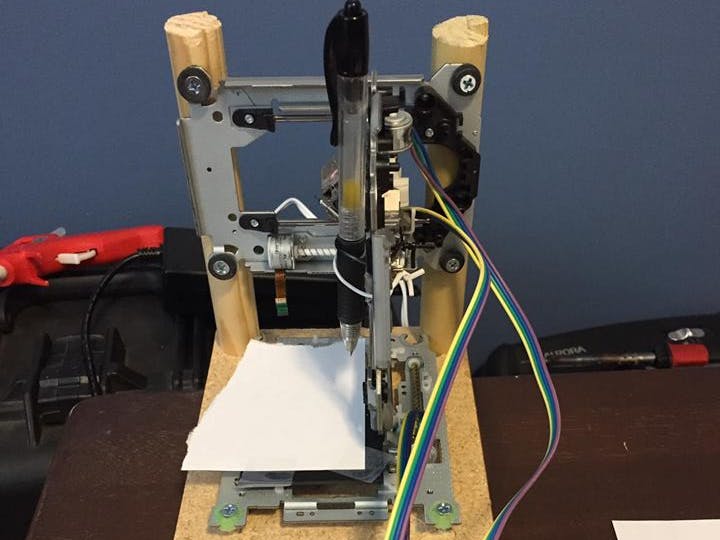 If you are like me and have a lot of old CD/DVD drives around and are interested in making a CNC plotter... I have successfully created a working mini CNC plotter. I have looked at others' projects for ideas on the easiest way to create one of these mini CNC machines. I was having trouble imaging how to put these three drives together. As they appeared easy to make, it took me about a day to finally have the idea to put my three different drives together.

I first measured how far apart the holes were on the X drive. I found them to be 4.25" apart. I realized that I had some dowel rod left over from another project, and I noticed that it was perfect to sit on a laminate shelf. So I CNC'd out some holes that were about 1/2" deep to hold the dowel rods.

The bottom 'Y' stepper drive did not sit flat on the wood. I found some PC riser screws that fit into the screw holes and that leveled it out. Then I screwed it in place.

Attaching the Z and X Drive

Used the screws to solder the drive

Attaching the Pen and Plastic Plate

I had to get a hot glue gun to fill in the cast aluminum slider with glue, then I put a cutout PVC sheet over it. I thought about 3D printing a holder of the pen, but I ended up just using hot glue to make the pen stand out enough, so that it didn't hit the frame of the Z drive.

Before testing the plotter:

First time testing the plotter. I noticed that I have some settings in the file misconfigured, but I can change that later. I know that it works.

3 projects • 10 followers
All my life I've been interested in the workings of computers. First introduced to Arduino around 2008,Now learning a lot about CNC machines
ContactContact
Thanks to grbl.