A "Tree of Light" with 9 plexiglass discs each adorned with LEDs arranged in a flower shape.

A "Tree of Light" Prototype

A "Tree of Light" Prototype

A "Tree of Light" with 9 plexiglass discs each adorned with LEDs arranged in a flower shape. 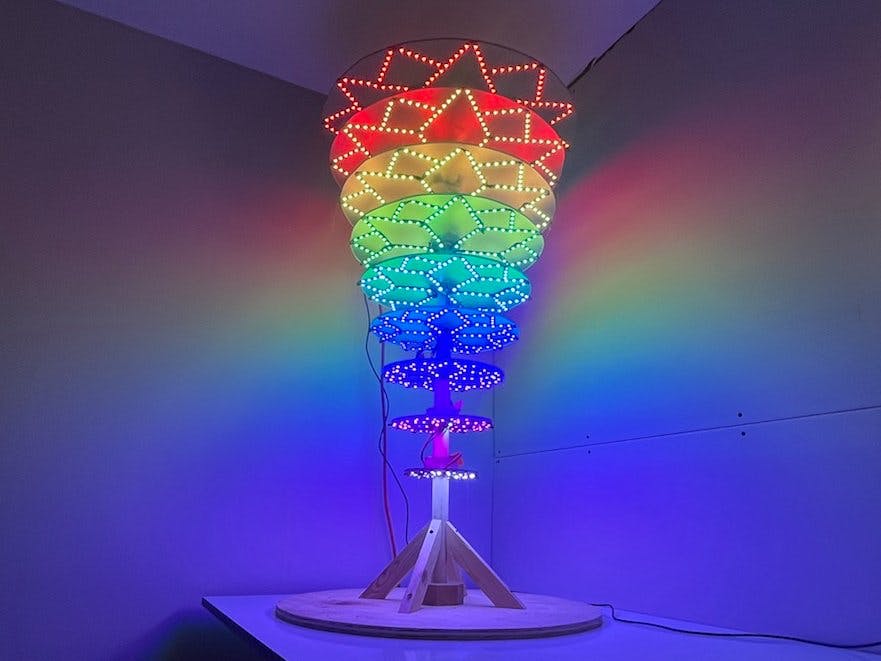 This 4-foot tall structure is a prototype for a larger LED structure we’re building this year that we’re calling the “Tree of Light”. The actual final structure will be somewhere around 35-40 ft tall, but since it will take time to build, we decided to build a smaller prototype, so that I can start writing code and figuring out the algorithms for the light patterns.

First measure all the things

* I won’t pretend I figured this out without looking it up… thank you stackexchange
** I figured out this 0.65 in a silly way. Instead of working out the geometry, I coded the above diagram with JavaScript in an HTML canvas, and logged out ratio of p2 relative to p1

With all these measurements, I drew the pattern onto each disc, and cut pieces of LED strip to fit along these lines. As I did that, I recorded the number of LEDs in p1 and p2 for each disc in a spreadsheet, and when I was done I had cut a total of 1284 LEDs.

How to route the LEDs along these “petals”

I needed to figure out how to send the wires from the ESP32 board and how to route all the segments of LED strip around each petal. The ESP32 board (which will live at the top center of the model) has 19 output pins. My goals here were to stay within ≤19 pins, minimize the amount of wire used, and also hide the wires to keep it nice-looking.

Here’s what that strip looks like all spread out:

Starting at the center of the disc, the LED strip will trace one inner and one outer petal, and then the pattern will repeat starting with the next inner petal. At first I planned to bend the LED strips on the 120 and 90 degree turns, but the LED strip felt too fragile, and wouldn’t sit flat enough. So I soldered short little jumper wires between each straight segment.

How big does the power supply need to be?

I happened to have this 5V power supply lying around. Here’s how I calculated whether it would be big enough:

* This YouTube video recommended getting a power supply that has a capacity at least 10% higher than the max needed.

Where to inject power?

1284 LEDs is obviously too many LEDs to string together in one strand. To figure out how often I would need to inject power, I unrolled one of the LED strips I bought and set the whole thing to white on full brightness. It looked obviously yellow around 2/3rds of the way down the strip, after ~200 LEDs. So I injected power every 200 LEDs.

The diagram below shows how all 1284 LEDs are split up into groups of ~200. I routed wires to each group to inject power. Each group also has a single data pin on the ESP32. Some groups have less than 200 because I wanted to start each new group of 200 at the beginning of the petal right near the center rod. It worked out to be 7 groups of LEDs:

The trickiest part with the glueing was that I had to glue the LED strips on in a specific order, to make sure that the wires got glued down underneath the LED strips.

The power supply and ESP32 live on the top of the tree. I ran wires from there down through little holes we drilled in the plexiglass to the beginning of each LED group, and connected to the strips with 3-pin connectors. The LED groups that start on one disc and end on the next disc are also connected together with the 3-pin connectors.

Mapping pins to discs in code

Setting each disc to a different color involved figuring out how to map LEDs from pins to discs. I ended up making one big long array of the LEDs for each disc chained together. Then I created a simple struct for each disc that stored a pointer to that disc’s LEDs, so I can access them per-disc. Check out the code snippets in the code section below!

What does it do??

I've programmed 12 different patterns so far for these LEDs. This video will run through and demonstrate them one at a time for about 10 seconds each. 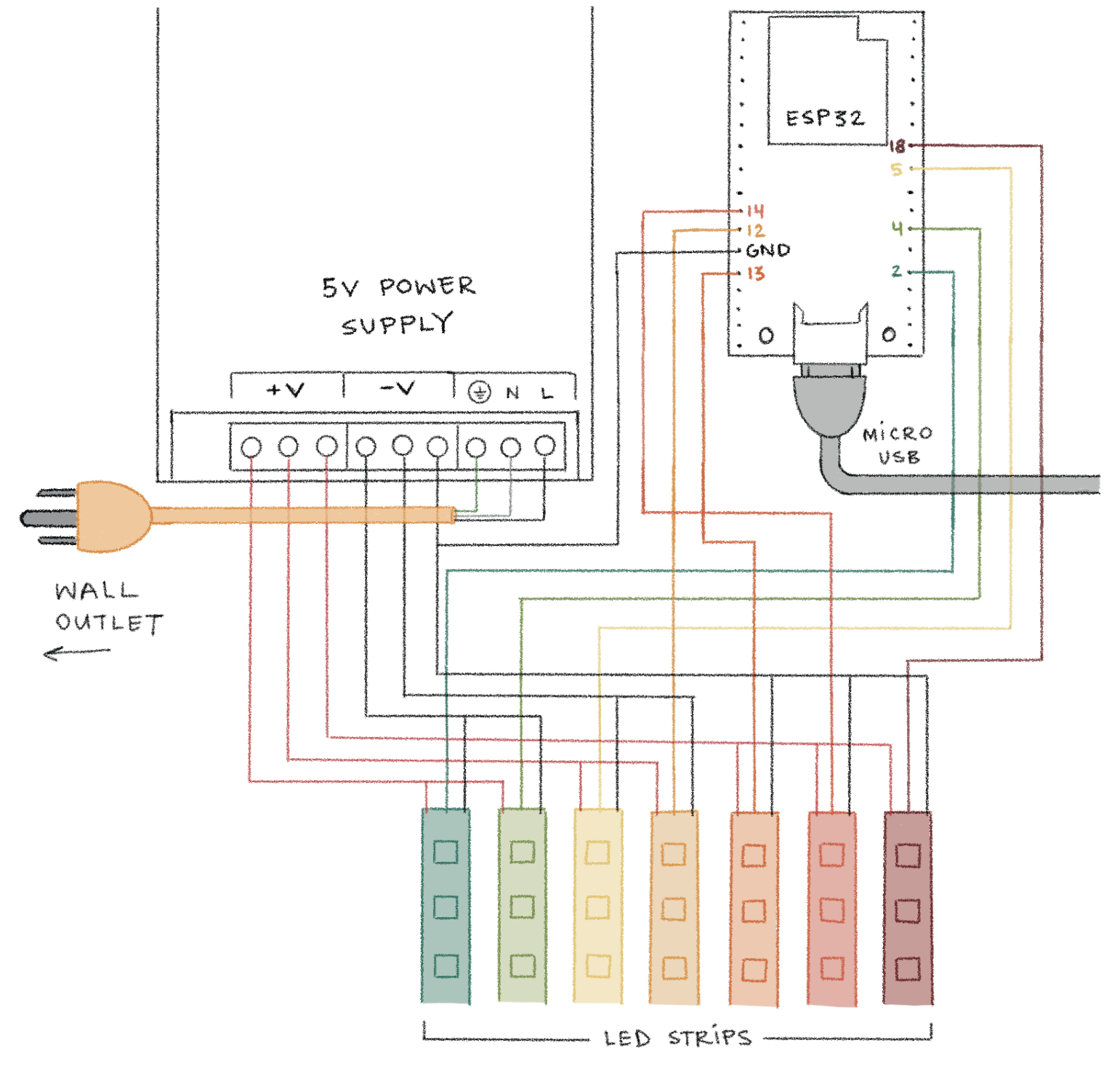 4 projects • 11 followers
I like learning about programming LEDs for art installations, and creative coding in general. I also love drawing diagrams and soldering.
ContactContact