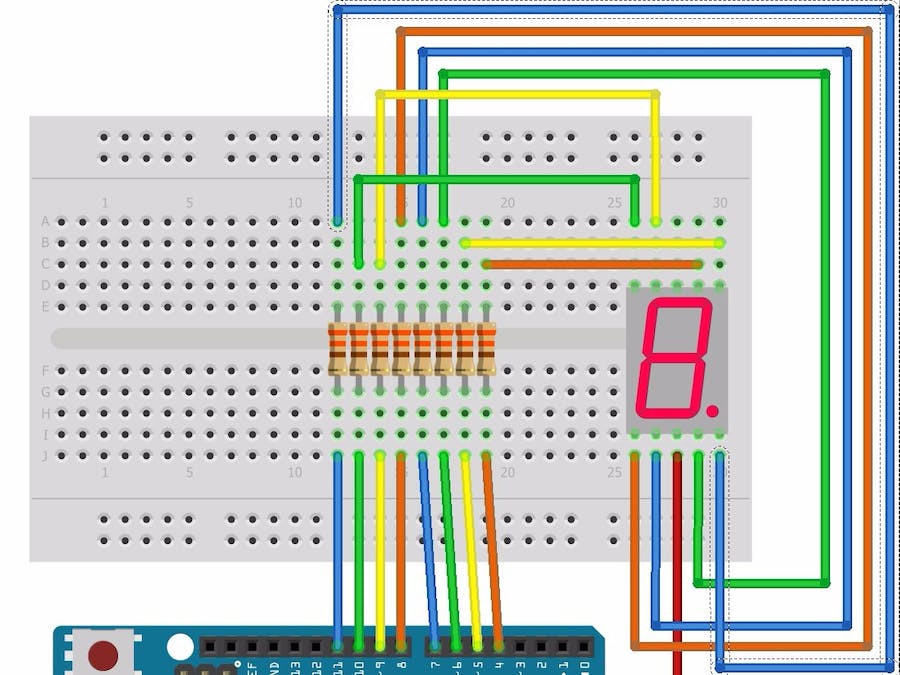 Seven Segment LED Displays are found in all kinds of devices from clocks and other appliances to instrument panels. They can show time, temperature, speed, direction, capacity (is the tank half full or half empty?) and many other types of information about things we want to monitor.

The purpose of this tutorial is to help you discover:

This is a very basic introduction to Seven Segment LED Displays intended to help you to take a random single digit display and make it work even if you don't have any specific information. The display I am using, for example, was picked out of my spare parts collection and looks very similar to this one:

The difference between the picture and the display I will be using is that the number stamped on mine is 5161BS and that is all I know about it so far. You may already have a How-To, tutorial or FAQ that describes your display, but if you don't, a Google search on anything that looks like a part number on the display should come up with enough information to get started. My very first search result for "5161BS" returned a six page data sheet that clearly described everything I need to know about using this display and more.

Let's assume, however, that the search did not turn up anything useful and we will have to get this thing working without any additional information. We can start by outlining some of the properties that apply to these displays in general:

There are two main types of 7 Segment LED Displays:

The idea behind having a common cathode or anode display is that by sharing either positive voltage or a path to ground, fewer pins are necessary than if every segment had it's own pair of cathode and anode pins. Because most displays also include a decimal point, colon or apostrophe, there are usually eight segments, seven for the digit and one for punctuation. With one common pin, there should be at least 9 pins. However, when I counted the pins on my 5161BS display, there were 10 -- five on the bottom row and five on the top. As it turns out, there are usually an even number of pins on these displays, with the "extra" pins being tied together as part of the "common" set.

The pins are numbered similarly to Integrated Circuits. From your bottom left, the first pin is number 1 and the numbering continues sequentially in a counterclockwise direction with pin 5 being at the bottom right, pin 6 at the upper right and concluding with pin 10 at the upper left. Many single digit 10 pin displays have the common pins in the center position of each row. Let's pretend we don't know this and determine the pin mapping by inspection. Prepare a test circuit according to this diagram:

Begin with a power source. I suggest using between +3.6VDC to +5VDC power and a ground from batteries or a bench top power supply. Run both the power and ground to their respective horizontal rail rows at the top of your breadboard. Connect a resistor from the power rail to an unused column of the breadboard. It doesn't matter which way the resistor is oriented. I am using a 220 Ohm resistor in this example, but anything in the range of 180 to 1,000 Ohms should work for mapping the display pins. We are limiting current flow with the resistor to protect LEDs in the segments from burning out.

Position the 7 Segment Display so that the top row of pins are separated from the lower pins by the center gutter that divides the breadboard. Then connect a jumper wire from the resistor to pin 1 of the display. Finally, touch a jumper from the ground rail to pin 2 of the display as shown on the above diagram.

What happened? Probably nothing -- and that is OK. This could be due to several reasons:

When the first individual segment lights up, you have most likely discovered a common pin. Note the relation of pins with respect to the lit segment and leave the jumper you have been moving connected to this common pin and begin moving the other jumper to empty pins counter-clockwise from pin 1 to pin 10, mapping the pins to the segments lettered A through G and Dp. Once the segments start lighting, you may encounter another common pin which will not light a segment. Use the following diagram to map the segments:

Map pin numbers on the display to lettered segments

Here is an example of completed maps for a Common Cathode and Common Anode Seven Segment LED Displays:

With the mapping completed, we can begin wiring the display. The 5161BS display I am working with happens to be of the Common Anode variety, so I put one red jumper between the Arduino Uno's +5V power pin to pin 3 (VCC) of the display. It is not necessary to also connect the VCC pin 8 on the display to +5V as pins 3 and 8 are tied together internally. The rest of the wiring is as follows:

When completed, the wiring for this tutorial using the 5161BS Display should look like the following Fritzing diagram:

The program is divided into several sections:

Three types of Declarations are made in this section:

The Setup code block is executed one time following the Global Declarations and does the following:

The main work of the sketch is done here and once entered, following Setup, the Loop code block repeats endlessly until power is shut off or a necessary component is removed or fails.

At the beginning of each cycle through the Loop code block, the Global Decimal Point display variable, decPt, is flipped so that every time the program repeats the loop, the decimal point alternates between on and off.

The remainder of the Loop code block is another for loop that increments the local variable, i, from 0 to 15 and does the following:

This function uses a bitmap lookup table to retrieve combinations of display segments that define numbers and some letters. Not every letter can be represented on a 7 Segment LED display, so we will limit the example to the digits 0 to 9 and the letters A, b, C, d, E and F, which can represent Hexadecimal numbers plus abbreviations for Celsius and Fahrenheit temperature.

This is the resulting bitmap lookup table:

The first column of the display is for the characters to be mapped. The next 8 columns are labeled A-Dp and represent the individual segments. The 1s and 0s on each row indicate the segments to be lit in order to display the character. A 1 indicates the segment should be lit while segments with a 0 are not lit. The 1s and 0s for any character row are combined into a bitmap that will be sent to the display. The last column represent the Decimal (base 10) value of each row's bit map. Note that the Dp column is always 0.

The myfnNumToBits function is passed an integer in the range of 0 to 15 when called from the loop() code block. Any other value will be treated as an error and the display will show three horizontal bars. A switch-case code block is used to assign the proper combination of 8 bits to a byte which is then returned from the function.

This user-defined function accepts a single byte argument, eightBits, when called from the Loop code block and deconstructs it into individual bit values using the built-in function, bitRead(). The bits are read starting at bit 7 (MSB) and ending with bit 0 (LSB) by decrementing the local variable, thisBit.

Once a bit is read, the value of the Global variable, common, is checked and the bit is flipped for common anode displays before being used to set the appropriate I/O pin in the range segA (MSB) to segP (LSB). When all eight segments have been updated the display should show the proper alphanumeric character and decimal point, if appropriate. Program control is then returned to the Loop code block.

The purpose of this tutorial is to demonstrate, as clearly as possible, how Seven Segment LED Displays work, suggest some methods for determining how to discover the properties of a randomly selected display and test. The wiring example demonstrated, in the interest of simplicity, will not scale well for a production application as it uses too many I/O pins. I suggest looking into using shift registers, which is the subject of the next tutorial in this series, "7 Segment LED Displays 102 -- Using a Shift Register".