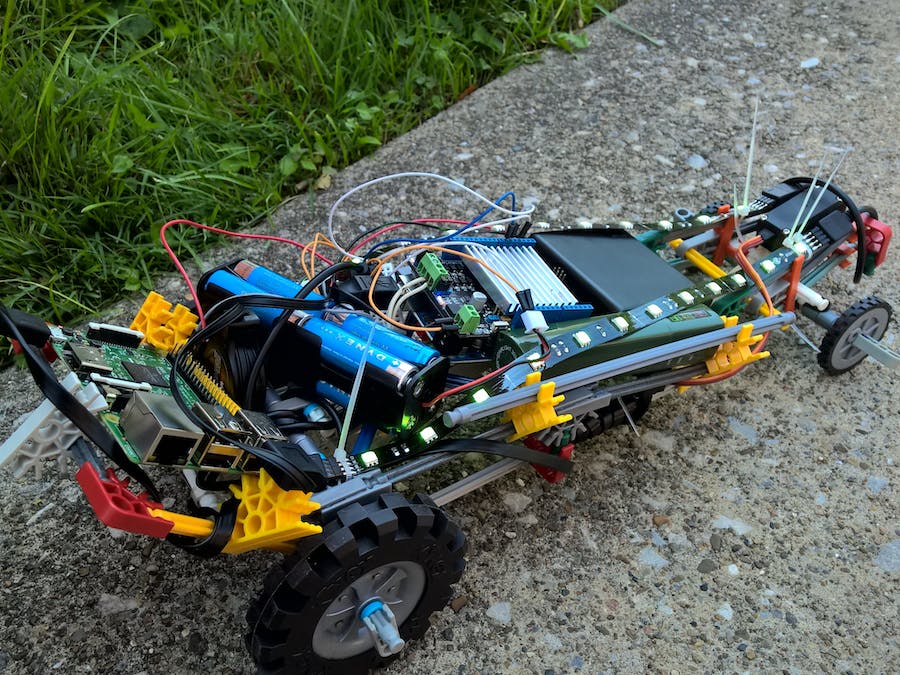 Imagine an old toy that you loved to play with. Now add the Raspberry Pi. What do you get?

This is how I came up with my idea for the Voice Controlled K'nex Car.

My project initially began as an investigation into artificial intelligence with the Raspberry Pi. After an hour of research I read about Alexa on Raspberry Pi's official blog. Further research led me to the "Internet of Voice Challenge" on Hackster. As I watched the introduction video, I could only imagine the infinite implementations.

That evening, I had only one question in mind: "How could I make an Internet of Things idea that was not only enjoyable to the end user, but also allowed the user to be creative in their own way?"

When I was younger, I collected K'nex sets and absolutely loved to build enormous roller coasters, ball machines, and even structures for electric train sets. This love of K'nex sparked my answer to my question: "What if I added the ability for Alexa to control a Raspberry Pi powered K'nex car?"

After several weeks of studying and development, I produced a working Alexa skill. As a 16 year old, this type of real world development was very instructive. I enjoyed every process from the initial development to the final certification of the Alexa skill to submitting my project.

How does my project work?

My project has 4 parts. As we go though each part, I will describe the part's processes and will give you a walk-through on how to construct each part. Please note that I have two creation methods, Simple and Advanced.

My Alexa skill was written in Node.js and is hosted on Amazon's Lambda web service. To open the skill, simply say "Alexa, open unofficial Raspberry Pi car." Alexa will send you a card on your Alexa app containing your session id. This id will need to be entered into the Raspberry Pi later on. By asking the skill for help or referencing the Voice User Interface Diagram provided below, the user should be able to navigate the skill with ease. When the user gives a command to the car, the request is sent through a PubNub virtual device. This is where the communication between the skill and the Raspberry Pi takes place.

1.) Enable my published skill for use with your Alexa enabled device.

2.) You may now see if the skill is enabled by saying, "open unofficial raspberry pi car".

3.) After the skill is enabled, you can move on to the Arduino Uno set up. Remember to follow the Simple creation method.

1.) Go to PubNub.com and create a profile.

4.) Make note of both the Publish Key and Subscribe Key.

6.) Navigate to the Lambda service.

8.) Skip the next screen

10.) Download my Git repository here. Extract it and navigate to the AlexaSkill folder.

11.) Edit the "index.js" file and find the line that defines "iotCloud". Copy your publish key and subscribe key into their respective inputs.

*Note: If you do not want to have a randomly generated session ID, you can create a custom one by commenting out the line where "myChannel" is defined. You can then use the line above it as a template on how to define "myChannel" to a custom name. Remember this name, because you will need it when setting up the Raspberry Pi.

Line 14 is where iotCloud is defined

12.) Send it to a compressed zip folder.

13.) Give it a name and description. Choose the Upload Zip option as the code entry type.

14.) Navigate to your zip file and upload it to Lambda.

15.) Choose an existing role for the handler and select "lambda_basic_execution".

18.) Now, copy the ARN in the top right hand of the webpage. You will need this for the skill creation.

20.) Give your skill a name and an invocation name.

21.) Add the custom slot types first (red), then get the intent schema and utterances and copy their contents into their respective text areas (yellow).

23.) Click next. Test the skill. You can either test from your device, or you can type in a command.

Congratulations! You created the skill! Now you can go to your Alexa-enabled device and open the the skill using its invocation name. If you want the published version, it's located here.

After the skill has been tested, you may move on to the Arduino Uno set up. Remember to follow the advanced creation method.

The Arduino program is written in Arduino's IDE and outputs responses based upon what it receives through the serial communication link with the Raspberry Pi. The Arduino controls the color of the lights and drives the car.

For both simple and advanced:

1.) Attach the SeeedStudio motor shield to the top of the Arduino Uno. (Make sure you wired the motor(s) already.)

2.) Plug in your Arduino into any computer that has Arduino's IDE installed on it.

3.) Download the shield's dependencies. (Learn how to code for the shield here!)

4.) Copy the code from here and put it into a new empty file.

5.) Save and upload to the Arduino Uno.

*Note: I used a COMMON ANODE LED STRIP which had build-in resistors. Please look up how to connect your LED STRIP to your Arduino, before you attempt doing what the schematic says. If you will be using COMMON CATHODE LEDs, you will need to open the Arduino code and comment out the line that contains:

Congratulations! You now have the Arduino Uno ready! You can now move on to the Raspberry Pi setup. Remeber to follow the same path you followed for the Alexa skill creation. (Simple or Advanced)

The script on the Raspberry Pi that handles the processing of Alexa's requests is written in Python. When the python script is activated, it first prompts the user for their session id. This is the id that Alexa displayed on a card in the app. The user should now enter their session id and hit enter on their keyboard. When the script displays "CONNECTED", the user should now unplug their monitor and keyboard. This opens the link between the Arduino Uno and the Raspberry Pi, thus enabling the car's motors and lights.

This script also opens a communication link to a servo connected to pin 18 on the Raspberry Pi. This servo controls the turning mechanism in the car. The script uses PubNub to retrieve Alexa's requests and feeds these requests into a series of if statements. Depending on the command, the script will either send the command to the Arduino Uno through serial communication, tell the servo to turn the car, or return an unknown command error. (This error will never occur, because Alexa will sense the unknown command before she even sends the request. It is written only in the event of a change in the Alexa skill that would send a request that is not handled by the Python script.)

3.) Plug the monitor (via HDMI), mouse, keyboard, Arduino Uno (via USB), and WiFi adapter (if applicable) into the Raspberry Pi.

4.) Power on the Raspberry Pi

5.) When the Raspberry Pi finishes booting, it will ask you to connect to WiFi.

7.) When the Raspberry Pi's Desktop appears, navigate to the connections menu in the top right of the screen.

8.) Pick your WiFi and enter you credentials.

9.) When you are connected, reboot the Raspberry Pi.

10.) After the reboot, you should see the following:

1.) Flash the latest version of Raspbian onto your SD card.

2.) Plug the monitor (via HDMI), mouse, keyboard, Arduino Uno (via USB), and WiFi adapter (if applicable) into the Raspberry Pi.

4.) Power on the Raspberry Pi.

5.) When the Raspberry Pi finishes booting, connect to WiFi.

6.) Open a terminal window and type the following:

8.) Find the change boot option and set it to boot to console with automatic login.

9.) Confirm your changes and reboot.

10.) When you Raspberry Pi boots back up, type the following two commands:

This will take a little bit to complete.

11.) When the updates are complete, install PubNub's package for Python:

12.) Clone into my repository:

13.) Navigate to the "RaspberryPiArduinoControl" folder:

15.) Find the line where "pubnub" is defined. Update the publish key and subscribe key to the keys from your pubnub device that you created earlier.

*Note: If you created a custom channel in the skill portion, find where "channel" is defined. Comment out this line and use the line below it as a template to set your own channel name. This name needs to be exactly the same as the one you set when creating the skill.

16.) When you are done editing "ArduinoControl.py", do the following: Press "Ctrl+x", then press "y", and finally, press "enter". You should now be back in the console.

*Note: For those who used a specific channel name, you will not be prompted to enter your session ID and the program will immediately start listening to the incoming requests from Alexa.

19.) From now on, every time you want to run the script, all you have to do is be connected to the internet and type these commands:

If you want to automate this process so that the script loads on boot, follow the optional steps below.

2.) At the bottom of this file, add the following:

4.) Now every time the Raspberry Pi boots up, it will boot straight into the python script.

This is the part in which user creativity comes into play. The user has the freedom to build their own vehicle. They do have to keep in mind that they will need to attach the servo to their turning mechanism and their drive motor to the main drive axle. Besides those constraints, the user is free to create their own car.

Below are instructions on how to build my car:

1.) Gather you materials. Use the picture below to help you find all of the necessary materials. (I used a Tower Pro MG945 Servo and hardware for the turning mechanism)

K'nex pieces for my car.

2.) Assemble the first layer. (Starting here, there will be a slide show for each section)

3.) Start to assemble the top layer.

4.) Put the motor power cables through the middle of the white piece toward the rear of the car. Secure the motor.

5.) Assemble the turning mechanism. (In image 4.4, make sure the servo clip is UNDER the K'nex price toward the rear of the car)

6.) Add some mount points for the electronics.

7.) Add the front axle and attach it to the servo. (We will use zip ties here)

You should now have a fully functioning car that can now be controlled by Alexa!

My project is not endorsed by K'nex or Arduino.

You can get the code from my GitHub. 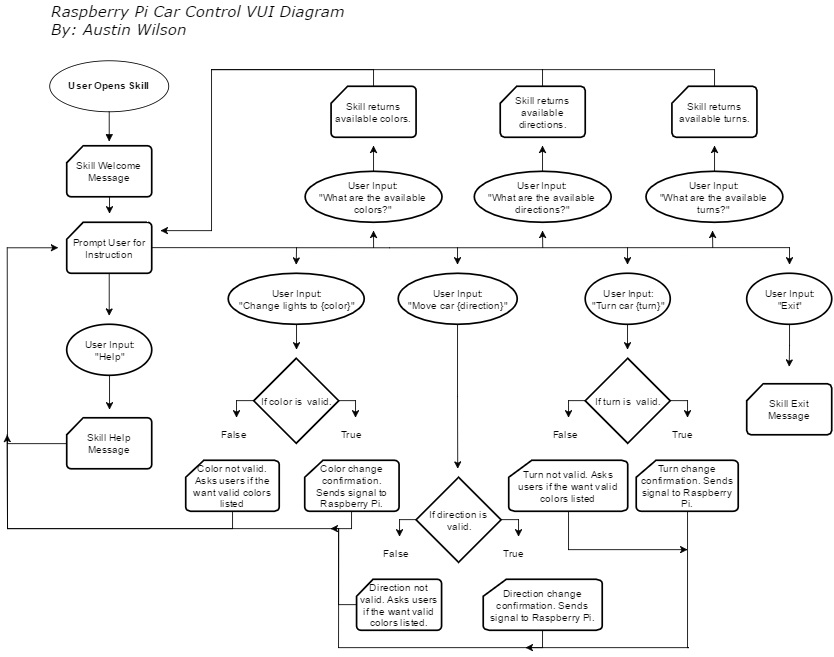