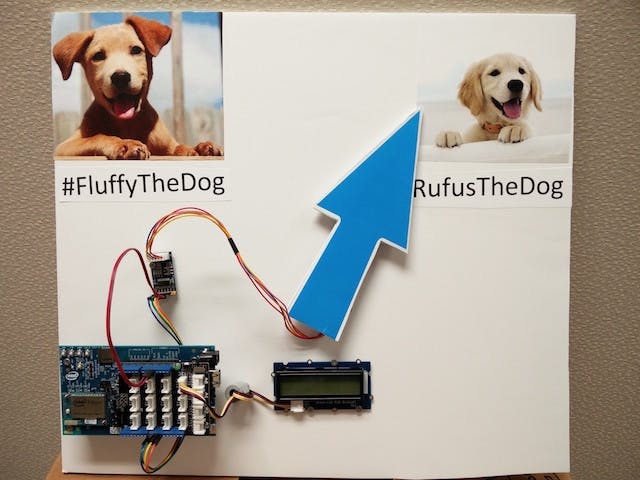 This project will run on the Intel Edison and incorporate the following elements:

We will step through combining these elements to create a real time Twitter monitor that will react to specific hashtags, display information on an LCD, move the stepper motor, and display the location, user and tweet text on a website served by the Intel Edison.

Assemble the Edison as shown:

Intel Edison with Hardware plugged in

1) Insert the sensor shield into the Arduino breakout board

2) Plug the LCD into one of the I2C ports, all of them will work

4) Insert the jumper wires into the stepper motor driver:

At the start of the tutorial you saw a photo of the setup that was made for this project. You are encouraged to create your own version! I found that a ziptie works really well to attach things to the stepper motor stem:

In order to read from the Twitter stream you will have to create a Twitter App and get API keys that you will insert into your code. Follow the tutorial at: https://dev.twitter.com/oauth/overview/application-owner-access-tokens

For more information on the streaming Twitter API see: https://dev.twitter.com/streaming/overview

In order to incorporate Google maps into your project and use the Google Geolocation service (translate city names into longitude and latitude coordinates) you will have to set up a google dev account and generate API keys. Go to the following link and follow the quick start steps halfway down the page: https://developers.google.com/maps/documentation/javascript/

We will be using the Intel XDK IoT Edition to program the Intel Edison for the rest of the tutorial. First you will load the XDK project into the XDK. Open the XDK, navigate to the project tab, and click “Open an Intel XDK Project ”. Navigate to the project folder you received and select TwitterDogs.xdk . Your project folder should now contain a main.js and package.json as well as a folder called public containing index.html and script.js .

If you want to use another IDE, transfer the code to the Edison using Filezilla or something similar. You will also have to run "npm install" through the Edison console in order to install the npm packages needed.

Now that you have the API tokens generated and code loaded onto the Edison you need to go through and add your tokens.

2) In main.js line 33-36: Replace the Twitter API placeholders with the appropriate keys.

3) In /public/index.html line 22: Replace with your Google API key

In main.js on lines 4 and 5 the variables dog1 and dog2 set the hashtags that are searched for in the twitter stream. Change these to reflect your project.

Click upload and wait for the npm packages to be installed. When the console shows “Upload Done” click run to launch the project. If asked select “Upload and Run”.

If you are running a different IDE launch the code from the Edison command line with "node main.js".

Here you will see the Google Map front end that will display the location, name, and tweet text of any tweets that use the hashtags you specified.

Whenever dog1 gets a tweet the stepper will move counter clockwise 50 steps and the LCD will display the running total for both dogs. dog2 tweets will move the stepper 50 steps in clockwise direction. When one of the dogs gets 10 tweets the LCD changes color to green and displays the winner.

Below I will describe the code in greater detail in order to help you understand and modify it to fit your project.

The stepper and LCD are controlled using the UPM library which is a higher level abstraction of MRAA library, more info can be found here: https://github.com/intel-iot-devkit/upm

Express.js is an server application framework that serves the webpage displaying the Google Map.

Socket.io is a real time communication protocol that is used to pass the tweet data between main.js that runs on the Edison runtime and public/script.js which runs in the browser runtime and renders the Google Map.

In order to create a map front end Google Maps API is leveraged.

In order to get latitude and longitude coordinates from the city name supplied by the Twitter API.