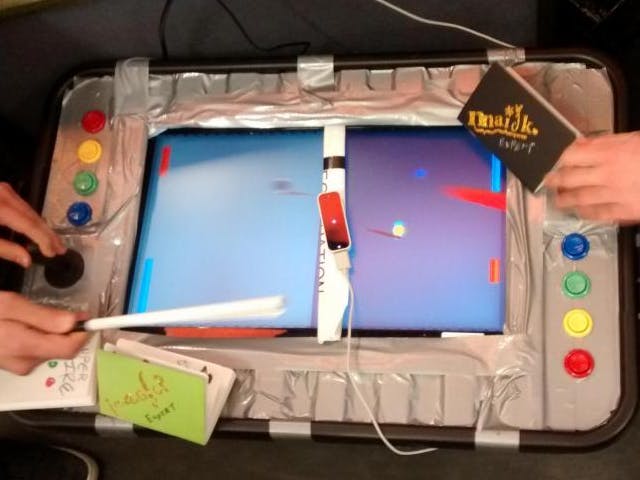 Originally made for the Global Game Jam 2015, Tragic Magic is a two player versus game about two wizards trying to learn magic. Players are each presented with two books of spells which sit atop the table & contain button combos for novice & expert spells. Once entered, the player aims and casts at the other wizard by pointing and flicking their wand.

At the end of each round players have the option to tweet the outcome along with a screenshot of the battle's aftermath.

The game depends upon the custom controller Max created during the 48hr jam, using a plastic box and a whole lot of duct tape.  He hacked apart the box's lid until there was a hole in the center for the monitor, and 5 holes on either side for the buttons & joysticks.  The monitor was then attached to the lid through liberal application of duct tape.

The arcade buttons are connected to an i-PAC 2 which sends the button inputs to the computer as key presses.
The wands are detected using the Leap Motion Controller's default tool tracking, which allows tracking of positioning & gestures of each wand.

1 project • 2 followers
I'm an independant game developer living in Scotland. I have a Raspberry Pi (Model B, 1st Gen) & an Arduino Duemilanove.
ContactContact

1 project • 0 followers
ContactContact
Thanks to Max Wrighton and Pip Snaith.