Build a voice-controlled robot! You will use Amazon Echo, Alexa, Heroku, Google Firebase, Android, and of course Arduino. Lots of fun!

Build a voice-controlled robot! You will use Amazon Echo, Alexa, Heroku, Google Firebase, Android, and of course Arduino. Lots of fun! 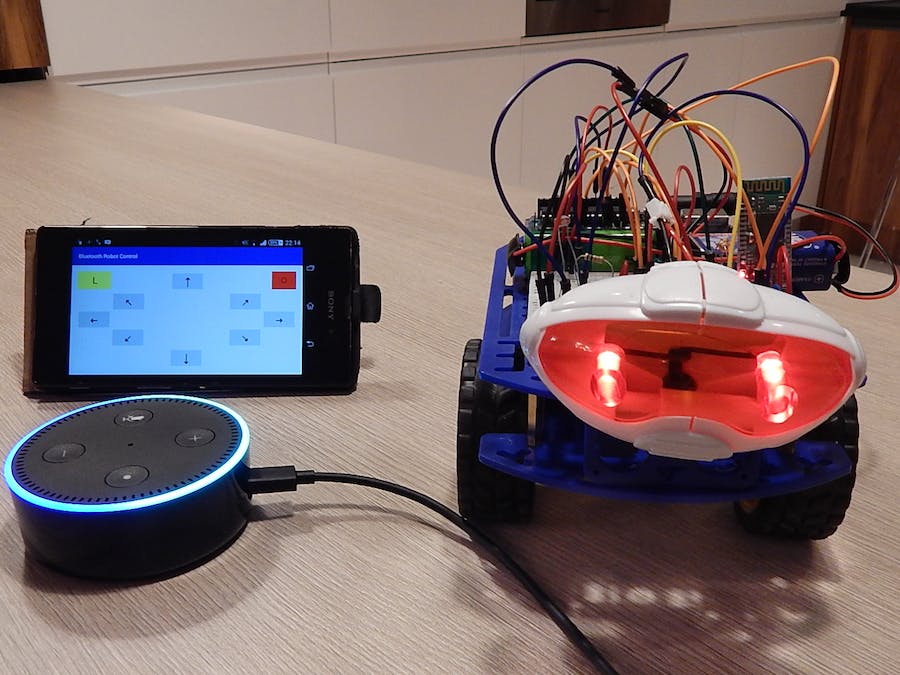 Voice-controlled robot is both hardware and cloud solution in one piece. The main components are:

2. Android application - to receive messages from Google Cloud Messaging and send them over Bluetooth to Arduino - deployed to your Android phone

3. Arduino - to read messages over Bluetooth and control the robot

4. The robot kit and robot circuit - any robot kit will do, you need HC-06 or HC-05 for serial Bluetooth communication and 2xDC motors attached to L293D to move it

It's not an entry-level tutorial, but... everything is ready. All key components are open-sourced. It's just a matter of assembling & integrating it all together. So let's start.

Here is how all the pieces are working together:

1. You speak to Echo device

5. Android application is setup to listen for messages from Google Cloud Service

6. Android application receives an incoming remote message and relays it over Bluetooth to Arduino

This is a first step of my tutorial. We will setup services which are prerequisites for the rest of the solution.

In this step you will learn how to setup & generate the following:

You will need Google account. If you don't have one already, create it. Google Firebase and Google Cloud Messaging are free to start.

Checkout code section of this tutorial and fetch a copy of my BluetoothRobotControl project. Then watch the first part of my tutorial.

Now that we have Google Cloud Messaging server key and phone's registration token we can deploy the Robot skill application.

In this step you will learn how to:

You need a Heroku account. If you don't have it already create one at: https://heroku.com. It's for free. You can run simple apps on Heroku for free. Also, majority of add-ons provides free plans. I love it.

Navigate to code section of this tutorial and fetch a copy of my alexa-robot-control project. Then watch the second part of my tutorial.

We have everything we need from the cloud part of the solution. It's time to register Robot skill in Alexa and test it.

In this step you will learn how to:

You need an Alexa Developer account. Just like Google Firebase & Heroku it's for free. Go ahead and create one now if you don't have it already: https://developer.amazon.com/alexa and watch the third part of my tutorial.

So the cloud part is working. Now the hardware. In the last part of my tutorial you will learn how to:

Navigate to code section of this tutorial and fetch a copy of my arduino project. Watch the video explaining the code structure and the circuits.

By now you should have your own voice-controlled Robot! Congratulations! Here is my robot in action.

I hope you enjoyed it as much as I did.

All my projects are open-sourced. If you would like to contribute to them you are most welcomed to do so. If you want to contribute back by opening a Github pull request that's even better.

The inspiration for this project came from my sons Tymoteusz & Szymon. They simply asked me to extend their manually operated robot (Christmas present). The first version was IR-controlled robot, second was a Bluetooth-controlled robot and finally the third generation was this voice-controlled robot.