After I recently discovered how to play WAV files on the M5Stack, I thought it would be perfect to make a flashcard system.

After I recently discovered how to play WAV files on the M5Stack, I thought it would be perfect to make a flashcard system. 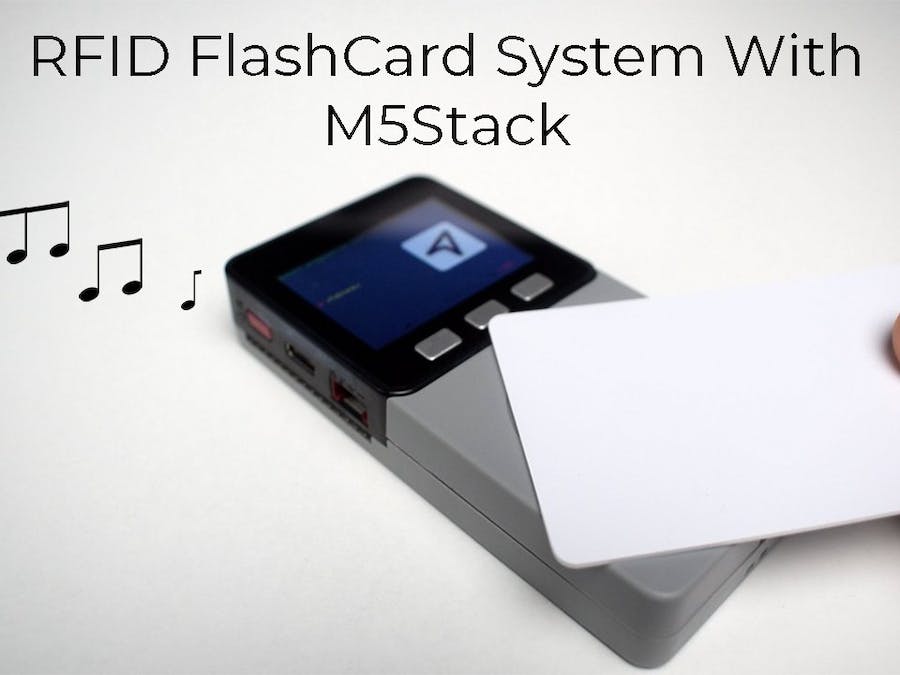 If you've already followed my tutorial on how to play WAV files on your M5Stack then this should be easy for you. We will be using VScode and the m5stack plugin. To see how to get set up watch this video.

First thing we'll need to do is to get the UID (Unique Identifier) of our RFID card or tag. Usually they wont have this printed on them, so we will need to scan them and write the codes down. Probably the quickest way to do this is to make this incredibly simple program in Uiflow.

Optionally here is the python code:

Once we have the UID's we also need to make sure we have some WAV files on an SD card or the flash system of our device. By default there is a WAV file called "mix.wav" in the /flash/res folder of the M5Stack flash memory.

Now, let's open VScode and start to write our program. Create a new python file in the apps folder by clicking the + button next to the directory.

Firstly, with the code we need to initialize the I2S peripheral, and we can do that like so:

Above we imported os and uos. These modules both deal with file directories in MicroPython. We need them to load the WAV files from your sd card or the internal flash of the device. Generally a simple os.mountsd() command should suffice to mount the sd, however I have experienced problems with this working reliably. If you have issues like me, this line usually fixes things.

Since both the screen and the SD reader on M5Stack both use SPI, I wonder if there is some conflict. Moving on, we now need to create a function to load the WAV file into the buffer and write it to the I2S, we do so like this:

Next we need to mount the SD if we are intending to play WAV files off the SD storage. This is generally recommended so as to save precious flash space.

Now for the final part of adding the RFID card trigger.

And thats all there is to it. Alternatively you could get the screen to display a picture

Give it a go and get creative. If you make something please share in the comments.

38 projects • 30 followers
I'm Luke from Manchester, UK. I've been living in shenzhen for 6 years. I do 3D design, Basic Electronics, Casting and other cool stuff.
ContactContact