A temperature monitoring system for a grill or smoker.

A temperature monitoring system for a grill or smoker. 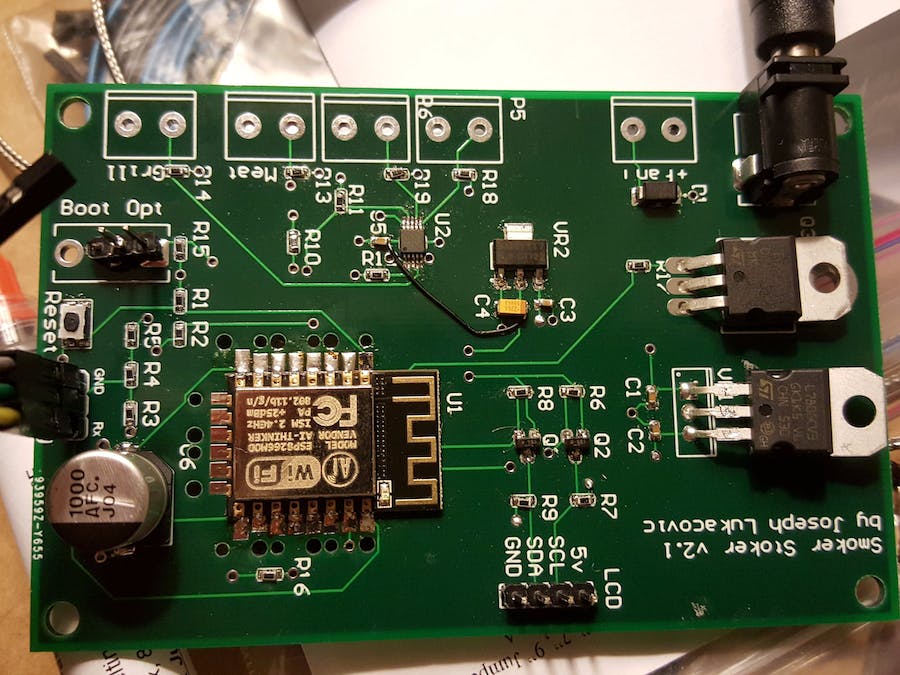 Project link, which includes design files are on CircuitMaker: http://circuitmaker.com/Projects/Details/Joseph-Lukacovic/smoker-stoker

I love BBQ, especially BBQ that's smoked. I received a Grill/Smoker a few years ago (specifically the Char-Griller Akorn Kamado Kooker) and have used it prepare all sort of meats - both seared on high heat, and slowly smoked with low heat.

The problem we want to solve

The problem I had was cooking with low heat meant controlling the amount of combustible air entering the charcoal chamber. To keep the temperature under 300F, I would have to continually fine tune the air vent every 5 minutes. I found this unacceptable.

Commercial products exist to solve this problem, however, they're more expensive than I'd like (starting at $200 for a kit). I figured how easy could it be to create my own?

A smoker controller really needs three things - a high temperature probe, a fan, and a microcontroller. Each of these items are very cheap on their own.

My first version consisted of an Arduino, high temperature thermocouples, an amplifier to read the thermocouple's signal, a LCD panel, and an ESP8266 to broadcast the status to a central server.

This worked well, however, I wasn't satisfied using two microcontrollers - and the thermocouple probes I bought had a blunt end, hard to insert into meat. Sharp ended thermocouples were much more expensive for some reason.

I decided to cut out the Arduino, and use some resistive high temperature probes that come with some other cheap grill temperature monitors. I found the ESP8266 had everything - GPIO including PWM (for the fan), I2c and a ADC to read the resistive value of the probes.

I decided the 12bit ADC didn't have the precision (temperature accuracy) as I'd like, so I ended up including a 16 bit TI ADS1115 chip to perform this task. Maybe a little overboard, and could be the most expensive component on the board, but I like accuracy.

I used Altium circuit maker to design the schematic and lay out the components on the board. What a great piece of software, and it's free! I sent the design to dirtypcbs.com. They're competitively priced and do very good work.