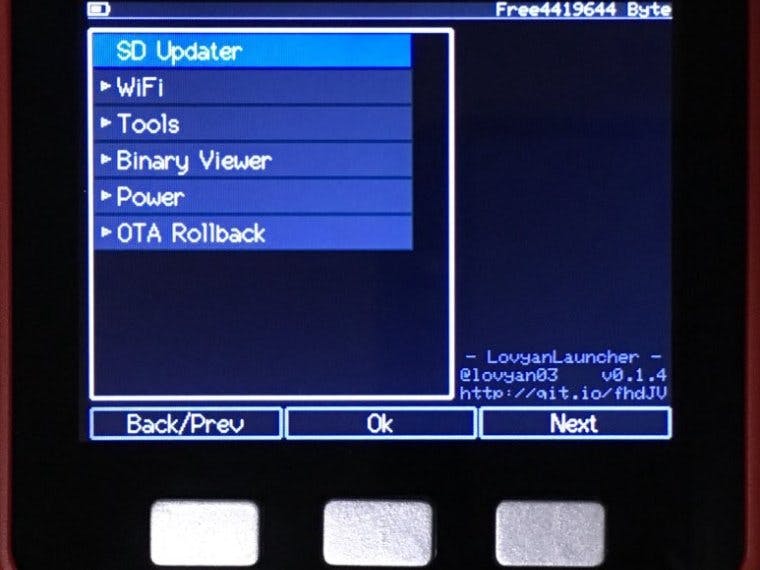 I am らびやん@lovyan03, a software engineer in Kyoto/Japan.My work is mainly the development of Windows software.I like to eat Ramen (Japanese noodles).

My project is "LovyanLauncher".It's a multi-functional launcher software for M5Stack.

At first it was just a simple tree menu for my own use, but as I got responses from various people and went through repeated revisions, it gradually became more sophisticated and was able to be released in its present form before long.

I usually publish the contents of the activity on Twitter, and I uploaded videos. when I got an M5Stack in August 2018 and also when I created a tree-type menu.

Then, there was a big reaction and I want the source to be released to everyone, and for the first time I got an account of github and released the source code.

There was also a response to "Is it a FileSystem?", So the contents of the SD card were modified to be able to be displayed in the menu.

For a while, I made a habit of creating something, publishing it in a form that can be called from the menu, and doing development and publishing on Twitter and github on a daily basis.

After several months, I wanted to make a WiFi access point connection from the menu, and because I needed a password input method, I made an on-screen keyboard.

Made to be reusable as Arduino library.https://github.com/lovyan03/M5Stack_OnScreenKeyboard

Also at this time, we implemented the improvement of the operation method and the IR function through many revisions.

Having understood how to make the library, I re-created the tree view UI as an Arduino library based on the menu I had made so far and released it.https://github.com/lovyan03/M5Stack_TreeView

Among the examples are those using tobozo's SD-Updater, incorporating the particularly useful functions that have been made so far, and proposed by the robo 8080 to add FTP server functions The revision went on to be useful as a useful tool collection.

Then, instead of positioning it as a TreeView example, It was recommended by Tobozo that it would be better to have one independent project, and the name was sought on Twitter, and LovyanLauncher was born.

As you feel comfortable to use it...

It was absolutely necessary to improve the feeling that the animation effect was put in from the time of creating the hierarchical structure for the first time.

Gathering the necessary information is a little difficult.

esp32's library, this is developing... but I feel that the document has not caught up.

It's quicker to search the library for the expected function name by grep, and it's just like you're just trying to get it on the spot.

M5Stack is packaged by combining various components with esp32 as the core, but this is the first time to use this type of hardware, so it is necessary to check the specifications of each component individually, and it is basically a system Until I got used to being different from other products.

USB plug in and out freely,You can get the battery level accurately,Screen shot available,All memory is more than 16MB,PSRAM does not overlap with UART GPIO,Even with LightSleep, the control of the backlight does not mess up.No noise on the speaker...

How to install and use LovyanLauncher?

Add this code to void_setup()

Export your sketch as a combiled binary and move it to the SD card.