KOKO is a kit to build yourself a tiny game console with a display, sound and three buttons. The components are simple through-hole type.

KOKO is a kit to build yourself a tiny game console with a display, sound and three buttons. The components are simple through-hole type. 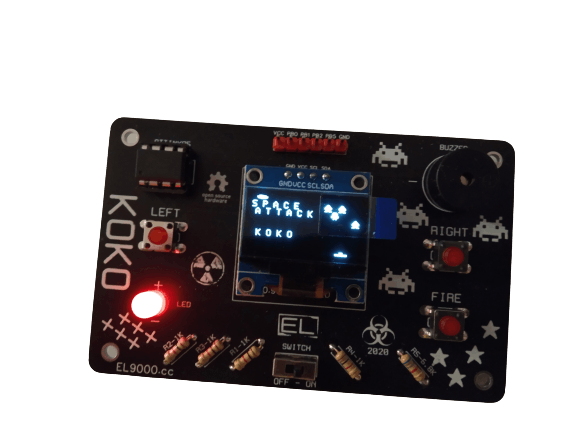 I grew up in 1980s video games era, do you remember the game PAC-MAN? Well, I have always dreamed of making a video game and then I was fascinated by the projects around ATtiny microcontroller.I looked at projects like TinyConsole, TinyJoypad, ORANGE-mono1 and others, all based on ATtiny85. I have to thank all makers who preceded me and who gave me the opportunity to realize my dream. I learned and took inspiration from all of them.There are several game system based on ATtiny, and they use 2, 3, 4 or 5 buttons. On the other hand I've always been passionate about the space invaders game, so I chose to use 3 buttons on my game console. Another decision I made was about measures, I opted for the size of a credit card, a little shape that has always intrigued me, a PCB that can fit in your wallet, cool!The game loaded on, SpaceAttackAttiny, is a tiny replica of Space Invaders and was gradually improved, you can find it on Andy Jackson github repository, he realized the game

KOKO is a kit to build yourself a tiny game console with a display, sound and three buttons. The components are simple through-hole type, but you need soldering skills to assemble the kit.

KOKO is hackable, It means you can upload other games on it, modify them or create a game yourself. It is programmed in C with an Arduino IDE. A game is simply a sketch. The console core is the little and cute microcontroller ATtiny85.

I made it because after creating the Cobalt 3, I understood there are several hobbiests who want something less complicated than a little pocket computer to start with. I needed something simplier, but interesting, to enter in the makers world. KOKO is easier to solder, is funny and enjoyable. And then you can hack it.

You can take it with you when you go out, it's small, it's in the shape of a credit card and you can play with it whenever you want.