Direct fabrication of microfluidic geometries without a photomask.

Direct fabrication of microfluidic geometries without a photomask. 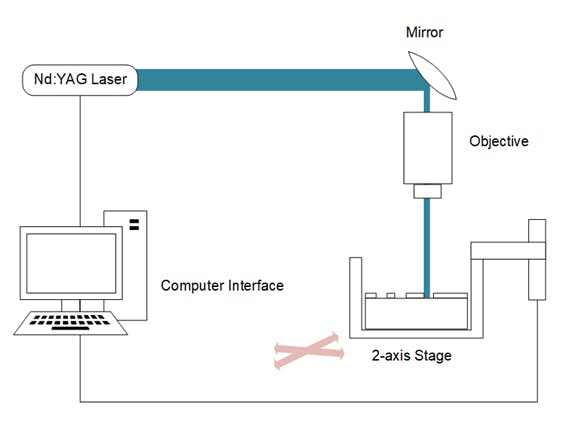 This project requires access to a Class 4 Nd:YAG Laser and should not be attempted without laser safety training and appropriate safety measures in place such as an interlock.

However, for this technology to reach the next stage and begin to see commercialization of these designs, a better fabrication method is urgently needed. Current fabrication methods for microfluidic devices are time-consuming and laborious. Additionally, many processes are expensive, requiring either expensive cleanroom facilities or expertise in machine operation. All these factors contribute to a bottleneck in microfluidic devices' design cycle; the turnaround time from a CAD design to a functional device is lengthy, typically weeks.

The most popular method, soft lithography, enables high DPI resolution and multiple layers; however, this method is slow and requires access to a cleanroom. Furthermore, a photomask is required, increasing costs and time. Additionally, an emerging technology, micro-stereolithography (µSL), is expensive and time-consuming for more complex devices. Therefore, there is a need for a less expensive system that can rapidly produce microfluidic devices 'on-demand' to aid in the prototyping and advancement of microfluidics both in conventional laboratories but also maker spaces.

The project aims to produce a system that can rapidly fabricate microfluidic devices to aid in developing the technology and increase accessibility to devices. Droplet microfluidics is a well-established field and has relevance for diagnostics, drug-delivery and ultra-high throughput research, such as directed evolution, functional metagenomics, and drug research.

The Overall Build and Laser

The overall system is composed of a laser rig, optics, control electronics, and computer software. The laser rig uses a NewWave Research Polaris II laser system. Although any laser with similar parameters (pulse energy and pulse width) will also work. The Polaris II laser has the following parameters:

To set up the laser, a laser enclosure has been built, which houses all the equipment. The laser and other components are clamped to an optical breadboard in order to maintain stability during laser operation. The laser needs to be aligned to the centre of the objective using alignment instrumentation. The sample must be at the correct numerical aperture length away from the objective as indicated on the objective (~4-5cm).

· Ensure the laser is filled with deionised water according to the manual.

· Ensure the correct laser safety goggles are worn when operating the laser.

· Ensure the door and laser enclosure are closed

To move the sample underneath the laser beam for ablation purposes, a two-axis stage is required. The NEMA23 ACME Lead Screw Linear Actuator (Ooznest) was chosen due to its lower cost (compared to 2-axis systems) and micron positional accuracy, required for ablation at the micron level. To connect the two actuators together, two CAD designs were made and 3D printed. They fit into the plate of the bottom actuator using M4 screws to allow the second to be secured tightly on top without any additional components. However, after a short period of time (>1 month), it was clear that the plastic parts were not durable to keep the two actuators together in a rigid way. The next design was to use M4 screws to directly attach the second actuator onto the platform of the first actuator.

The electronics and firmware of the build were chosen to be open-source and highly customisable. The NEMA23 motors are controlled by a RAMPS 1.4 (Ooznest) board connected to an Arduino microcontroller (Ooznest). Each motor has a DM542T Digital Stepping Driver (StepperOnline), and the drivers are powered using a 24V power supply (Ooznest). The Arduino board used is a specialised version of the Arduino Mega board, called the Taurino, as it can handle the higher voltage needed to drive the motors (up to 24V). Marlin firmware was chosen to act as the host firmware for controlling the linear actuators.

The firmware chosen, Marlin, is community-built, open-source, and is commonly used for custom CNC/3D printing machines. The firmware was uploaded to an Arduino using Platformio on Microsoft Visual Studio Code. In this way, G-Code can be sent to the microcontroller via the serial interface from a host computer to control the actuator stage in a 2-dimensional space. Endstops were fitted with a custom-built 3D printed holder to connect them to the ends of the actuators and linked to the RAMPS 1.4 board to give boundaries to the 2D space and to allow calibration.

In order to create a G-Code file for a particular pattern, a vector image is loaded into the Inkscape software on a computer. In Inkscape, parameters can be chosen, such as the build area and speed of patterning. The vector image is then converted into G-Code using the built-in converter.

1 project • 0 followers
I am a biotechnology PhD student at the University of Cambridge with a deep interest in droplet microfluidics.
ContactContact

1 project • 0 followers
I'm an engineer at Cambridge University and I have run and sold a couple of tech start-ups.
ContactContact