Startle your guests who do not have an entrance permit (RFID tag) and get notified w/ WhatsApp messages without checking the door :)

Startle your guests who do not have an entrance permit (RFID tag) and get notified w/ WhatsApp messages without checking the door :) 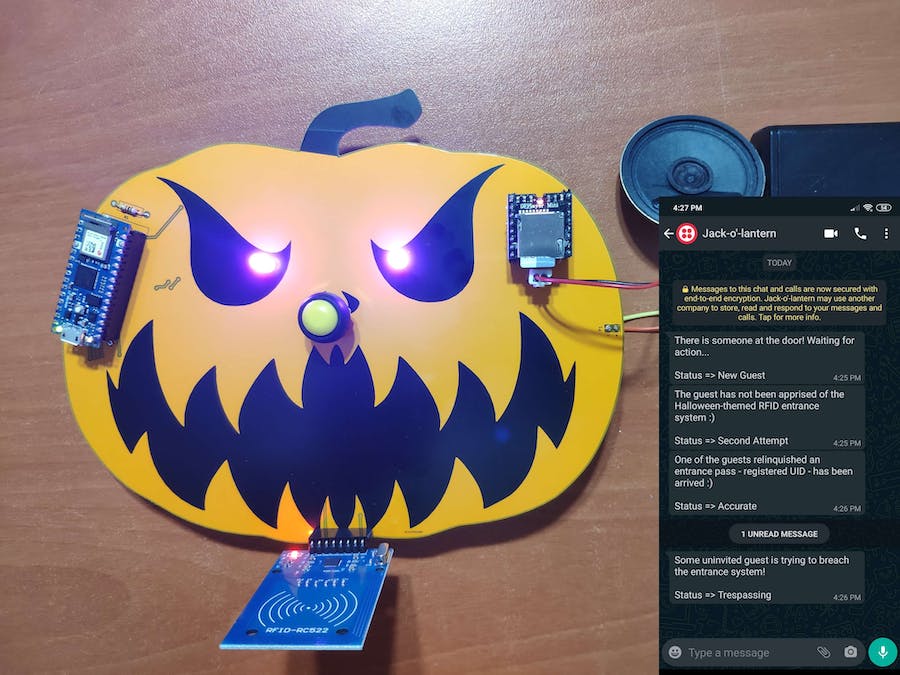 Despite the fact that making a hilarious yet not deceitful joke with a jack-o'-lantern on Halloween night is not unobtrusive, I decided to create an exceptional event for my guests on Halloween when they ring the doorbell by designing a jack-o'-lantern doorbell with intriguing features. And, not surprisingly, I only let some of my closest friends know about my new doorbell features by giving them registered RFID tags (entrance permits) to make my other guests frightened even a little bit :) In detail, this doorbell talks to the guests and informs the user via WhatsApp when the guests ring the doorbell or show RFID tags or cards.

First of all, to make the doorbell talking with the guests after an interaction, I generated voices from texts for each occasion I wanted the doorbell to talk. You can get more information about how to create voice files over text files in the following sections.

Then, to play the voices I generated with the Arduino Nano 33 IoT, I used a DFPlayer Mini MP3 Player with a speaker. And, to read and register UIDs from RFID tags or cards, I used an MFRC522 RFID Reader.

Finally, I included a DC184 Yellow Pushbutton as the doorbell button and RGB common cathode LEDs as the eyes of the jack-o'-lantern.

After completing my design on a breadboard and testing the code, I designed a PCB (WhatsApp RFID Talking Doorbell) with a unique jack-o'-lantern shape with an angry facial expression to create a suitable and wicked doorbell for Halloween :)

Huge thanks to PCBWay for sponsoring this project.

I tested all connections and modules with the Arduino Nano 33 IoT on the breadboard.

Then, I designed the WhatsApp RFID Talking Doorbell PCB by using KiCad. I attached the Gerber file of the PCB below, so if you want, you can order this PCB from PCBWay to create a stylish jack-o'-lantern to frighten your guests who were not informed about its cursed features :)

Click here to inspect and order this PCB directly on PCBWay.

Step 2: Setting up a LAMP web server on Raspberry Pi

If you are a novice in programming with Raspberry Pi, you can inspect well-explained instructions and tutorials on the official Raspberry Pi website.

To go to the official Raspberry Pi setting up tutorial, click here.

To send WhatsApp messages through Twilio's API, the only thing you need to do is to sign up for a Twilio Trial Account.

You can sign up for Twilio with my referral code here :)

2) Open the Dashboard of the application.

3) Go to the Twilio Sandbox for WhatsApp to get the verification code.

4) Connect your phone to your application with the verification code.

I developed the WhatsApp Talking Doorbell in PHP and explained the source code of the application in the Code Explanation section below for those who are interested.

However, if you are not fond of web development with PHP, you can download the application in Downloads - named WhatsApp_Talking_Doorbell.zip - and upload it to your Raspberry Pi without diving into PHP coding.

The Twilio PHP Helper Library is necessary to use this application. And, I have already included the mentioned API in the application folder (WhatsApp_Talking_Doorbell), so you do not need to download it particularly.

You can get more information about the API here.

By the following steps, install the WhatsApp Talking Doorbell on the localhost:

2) Otherwise, if all required parameters are accurate, the application prints: Message Send...

3) Subsequently, the application sends the message body to the user via WhatsApp.

After completing the steps above, to give the ability to speak to the device, I generated different voice files from text files for each occasion, which I wanted the device to interact with the guests by talking. In this way, I could play them with the DFPlayer Mini MP3 Player when triggered for each selected event.

I wrote four different speeches for occasions and converted them to voice files via the web application below:

Of course, they are tricky and apt for Halloween :)

You can download the voice files I generated below - voices.zip.

1) First attempt to ring the doorbell:

"Hello, I am the talking jack o lantern and obligated to protect this house in this wicked night. Please show your entry pass tag or card handed to you before entering the house. Then, I will notify the owner via WhatsApp, depending on whether you have the keycard or not."

2) Second attempt to ring the doorbell:

"Oddly enough, you showed me a wrong and yet deceitful entry tag or card in order to enter this house. Therefore, not surprisingly, I will send a breaking and entering alert message to the owner of the house. Please leave the house immediately."

If you are a novice in programming with Arduino Nano 33 IoT: do not worry, it is simple to use with Arduino IDE. Just download the required drivers - Arduino SAMD Core - as well-explained here.

To be able to connect to the WiFi via Arduino Nano 33 IoT, download the WiFiNINA library from here.

I used the second serial port (Serial1) on the Arduino Nano 33 IoT to communicate with the DFPlayer Mini MP3 Player.

Then, Arduino Nano 33 IoT is ready to execute the project code :)

As explained in its product wiki,"The DFPlayer Mini MP3 Player For Arduino is a small and low price MP3 module with a simplified output directly to the speaker. The module can be used as a stand-alone module with an attached battery, speaker, and push buttons or used in combination with Arduino".

To be able to use it with Arduino, the only thing you need to do is to download its library provided by DFRobot from here.

For Arduino Nano 33 IoT, you have to use the second serial port on RX0 and TX1 pins - Serial1 - instead of the SoftwareSerial library like in the sample code.

And, to be able to execute commands accurately, save your songs by adding consecutive numbers to song names as did I:

Download the required libraries to be able to control the modules:

After finishing and uploading the code to the Arduino Nano 33 IoT, I attached all required components to the board via headers - MFRC522 RFID Reader, DFPlayer Mini MP3 Player, Speaker, and 5V External Battery.

DFPlayer Mini MP3 Player needs a sustainable 5V power supply to execute commands properly. Since the Arduino Nano 33 IoT is a 3.3V based development board, I added an external battery socket to the PCB to supply the DFPlayer Mini and the Nano 33 IoT both. I used an MB102 Breadboard Power Supply Module to generate sustainable 5V and connected it to the PCB via headers.

1) When the register_new_UIDs() function is executed, the device creates a list of UIDs to be registered for further comparison and displays the list via the serial port. In that regard, the user can register all RFID tags or cards to be utilized to distinguish invited and uninvited guests :)

3) In the default mode, when the device starts working, it turns the RGB eyes to purple after executing the code precisely.

4) After the first attempt to ring the doorbell, the device plays the 001bell_voice.mp3 file, turns the RGB eyes to yellow, and sends a notification message to the user via WhatsApp:

"There is someone at the door! Waiting for action... Status => New Guest"

5) After the second attempt to ring the doorbell, the device plays the 002second_bell_voice.mp3 file, turns the RGB eyes to red - angrier :) - and sends a notification message to the user via WhatsApp:

"The guest has not been apprised of the Halloween-themed RFID entrance system :) Status => Second Attempt"

6) If the guest shows an unregistered and wrong RFID tag or card, the device plays the 003wrong_rfid.mp3 file, turns the RGB eyes to cyan, and sends an alert message to the user via WhatsApp:

"Some uninvited guest is trying to breach the entrance system! Status => Trespassing"

7) If the guest shows a registered and correct RFID tag or card handed to him/her, the device plays the 004correct_rfid.mp3 file, turns the RGB eyes to green, and sends a notification message to the user via WhatsApp:

"One of the guests relinquished an entrance pass - registered UID - has been arrived :) Status => Accurate" 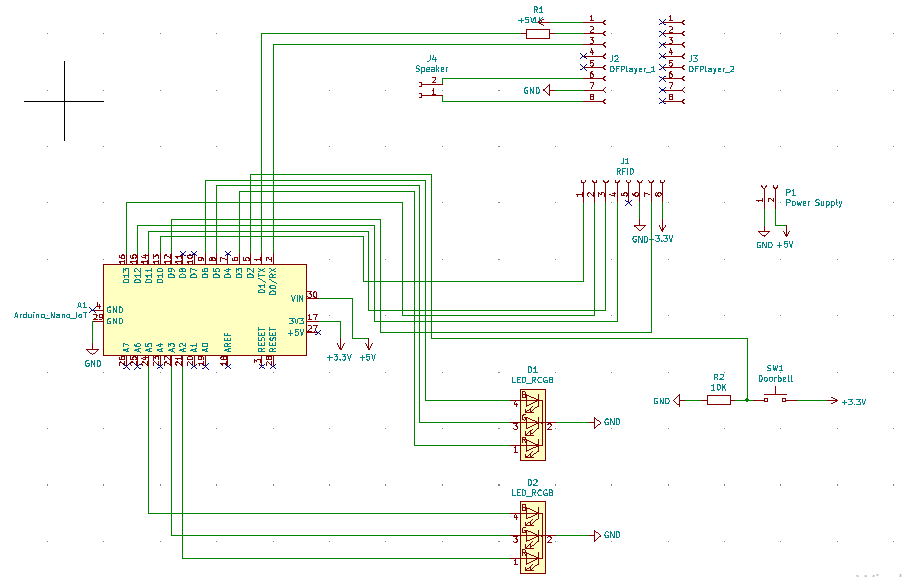 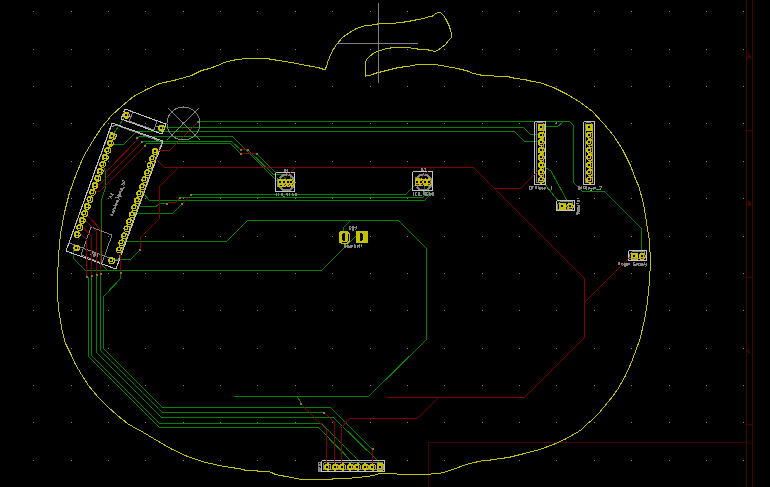 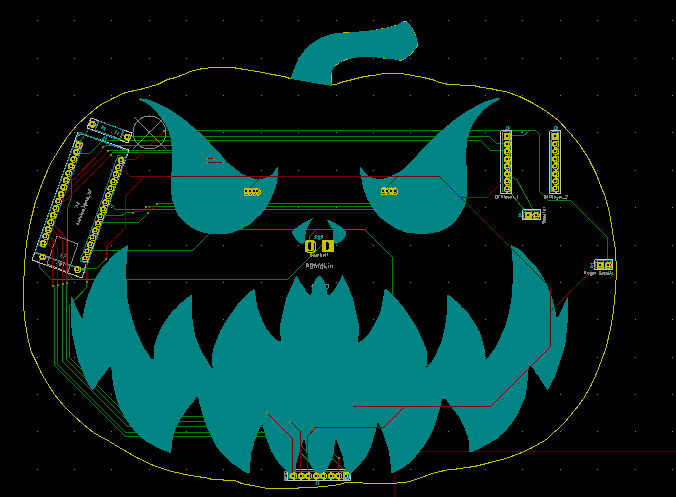