Via OpenCV, recognize villagers to display their birthdays, loves, likes, and hates while playing Stardew Valley on LattePanda Alpha.

Via OpenCV, recognize villagers to display their birthdays, loves, likes, and hates while playing Stardew Valley on LattePanda Alpha.

In Stardew Valley, even though I played it more than once already, I still needed to scrutinize guides to remember villagers' gift preferences while trying to increase my friendship with certain characters. Thus, I decided to employ computer vision to recognize villagers and display their birthdays and gift preferences (loves, likes, and hates) automatically while playing Stardew Valley.

Since I wanted this project to be as compact as possible, I chose to use a LattePanda Alpha 864s, a high-performance SBC (single-board computer), has an embedded Arduino Leonardo. To recognize villagers while exploring the Stardew Valley world, I deployed the OpenCV template matching. After detecting villagers successfully, to display their gift preferences and birthdays without interrupting the gaming experience or performance, I used the embedded Arduino Leonardo on the LattePanda Alpha. Arduino Leonardo prints the detected villager information on a 3.5" 320x480 TFT LCD Touch Screen (ILI9488) and notifies the player via a buzzer and a 5mm green LED.

Because I was usually struggling to increase my friendship with these eight characters below, I used the OpenCV template matching to recognize them:

After running this project and obtaining accurate results, it obviates the need for shrewd gift acumen for villagers while playing Stardew Valley. 😃 🎁

Huge thanks to DFRobot for sponsoring this project.

I developed an application in Python to recognize villagers in Stardew Valley and send their information (gift preferences and birthdays) to the Arduino Leonardo. As shown below, the application consists of one folder and five code files:

I will elucidate each file in detail in the following steps.

To execute my application to recognize villagers successfully, I installed the required modules on Thonny. If you want, you can use a different Python IDE.

First of all, to be able to use template matching to detect villagers in Stardew Valley, I needed to create templates for each villager (character) in my list shown above. Since there are different poses in Stardew Valley for characters, I utilized in-game screenshots to catch unique character poses - sitting, turning right, turning left, going forward, etc. Because I was running Stardew Valley on Steam on LattePanda Alpha, I took screenshots while playing the game on Steam by pressing F12.

Then, I cropped character poses from the in-game screenshots to derive my villager templates.

Finally, I created a JSON file (villagers.json) to store gift preferences and birthdays for each villager in my list:

I created a class named captureWindowFrame in the windowframe.py file to obtain real-time game window data (frames) while playing Stardew Valley and convert the raw frame data to process it with OpenCV.

⭐ Do not forget to install the pywin32 module to access the Windows (Win32) API.

⭐ In the __init__ function, define the handle for the game window, get the window sizes, and adjust them to remove redundant pixels from captured frames.

⭐ In the get_window_names function, print the list of window names and hex codes if necessary.

After eliciting real-time game window frames (screenshots) and formatting them appropriately for OpenCV, I applied template matching to the captured frames so as to detect one of the eight villagers (characters) in my list:

I created a class named computerVision in the vision.py file to process the captured real-time game window frames (screenshots) with OpenCV by employing template matching. The class searches for all given poses (templates) of a villager in the captured frames and generates results for each template. Also, it presents the real-time villager detection results by drawing rectangles or markers on the captured frames.

I used the TM_CCOEFF_NORMED comparison method (explained above) to generate results. Since template matching (cv.matchTemplate) generates results in confidence scores for each possible match location in the main (input) image, I define a threshold (0.65) to get the most accurate results for multiple objects (templates). You can examine other comparison methods and different threshold values while applying template matching.

⭐ Do not forget to install the opencv-python module to utilize template matching in OpenCV.

⭐ In the __init__ function, read image data with the cv.imread function from each template (character pose) in the given cropped image list and save template sizes.

⭐ In the detect_cropped_image function, employ template matching on the given main image (game window frame) to generate results for each given template (character pose):

⭐ Obtain the detected template (character pose) locations above the given threshold (0.65) on the main image (window frame).

⭐ Group the rectangles list to avert showing overlapping or close positions by the 0.7 relative difference between sides of the given rectangles.

⭐ In the get_and_draw_points function, loop through all detected template data in the rectangles list to define the rectangle box and center points:

⭐ Then, return the altered main image (game window frame) with boxes or markers and clear the rectangles list to avoid errors. If nothing is detected, return the original frame.

⭐ Modify the built-in parameters in the function to change the color and size settings of boxes and markers.

⭐ In the get_center_points function, return the center points of the detected template locations.

Step 1.4: Sending the detected villager information to the Arduino Leonardo

As shown above, I created a JSON file (villagers.json) to store gift preferences and birthdays for each villager in my list. After detecting villagers successfully by applying template matching on real-time game window frames, I created a function named arduino_serial_comm in the arduino_serial_comm.py file to send the detected villager information in the villagers.json file to the build-in Arduino Leonardo port via serial communication.

⭐ In the arduino_serial_comm function, define the build-in Arduino Leonardo port (COM6) on the LattePanda Alpha.

⭐ Then, elicit information of the given villager (character) from the villagers.json file and send that information to the Arduino Leonardo via serial communication.

⭐ Do not forget to use the encode function to be able to send strings via serial communication.

After creating all the code files mentioned above, I decided to combine all required classes and functions in the main.py file to make my code more coherent.

⭐ Include the required classes and functions.

⭐ Define a villager (character) name among the eight villagers in the given list above.

⭐ Create a list of templates (cropped villager poses) of the given character.

⭐ Obtain the output image and the center points of the detected template locations.

⭐ When recognized, save the output image with the name of the detected villager - cv.imwrite.

⭐ In the loop, initialize the detect_character function.

After running the main.py file successfully:

🎮💻 Finally, it displays the number of the detected template locations in the given game window frame on the shell and sends the recognized villager information to the Arduino Leonardo via serial communication. As explained above, it sends data for once until the detected villager disappears in frames to avoid repetitive messages.

Step 2: Displaying the transferred villager information with the Arduino Leonardo

After completing all steps above and transferring the detected villager information successfully to the embedded Arduino Leonardo on the LattePanda Alpha via serial communication, I utilized a 3.5" 320x480 TFT LCD Touch Screen (ILI9488) to display that information. Also, I used a buzzer and a 5mm green LED to notify the player when template matching recognizes a villager (character).

⭐ Include the required libraries.

⭐ Define the required pins for the 320x480 TFT LCD Touch Screen (ILI9488) and initiate it with the hardware SPI on the Arduino Leonardo (SCK, MISO, MOSI).

⭐ If there is incoming serial data, save it to the gameData string to obtain the information of the villager detected by template matching.

⭐ After eliciting the detected villager information, display that information (character name, birthday, loves, likes, hates) on the TFT LCD Touch Screen and notify the player via the buzzer and the 5mm green LED. Then, clear the gameData string.

After running this code (lattepanda_detection_results_display.ino) on the embedded Arduino Leonardo on the LattePanda Alpha:

🎮💻 It shows the home screen while waiting for incoming serial data.

🎮💻 After template matching detects a villager (character) and transfers the detected villager information to the Arduino Leonardo via serial communication, it displays:

🎮💻 Also, it notifies the player via the buzzer and the 5mm green LED.

Results for each villager while exploring Stardew Valley

After completing my project, I explored the Stardew Valley world to detect villagers (characters) in my list with template matching and display their information (birthdays and gift preferences) on the Arduino Leonardo:

I connected the 3.5" 320x480 TFT LCD Touch Screen (ILI9488), the buzzer, and the 5mm green LED to the embedded Arduino Leonardo via the LattePanda Alpha GPIO pins.

After completing all steps above, I managed to increase my friendship with Stardew Valley villagers (characters) effortlessly without needing to scrutinize guides so as to remember a certain villager's gift preferences and birthday 😃 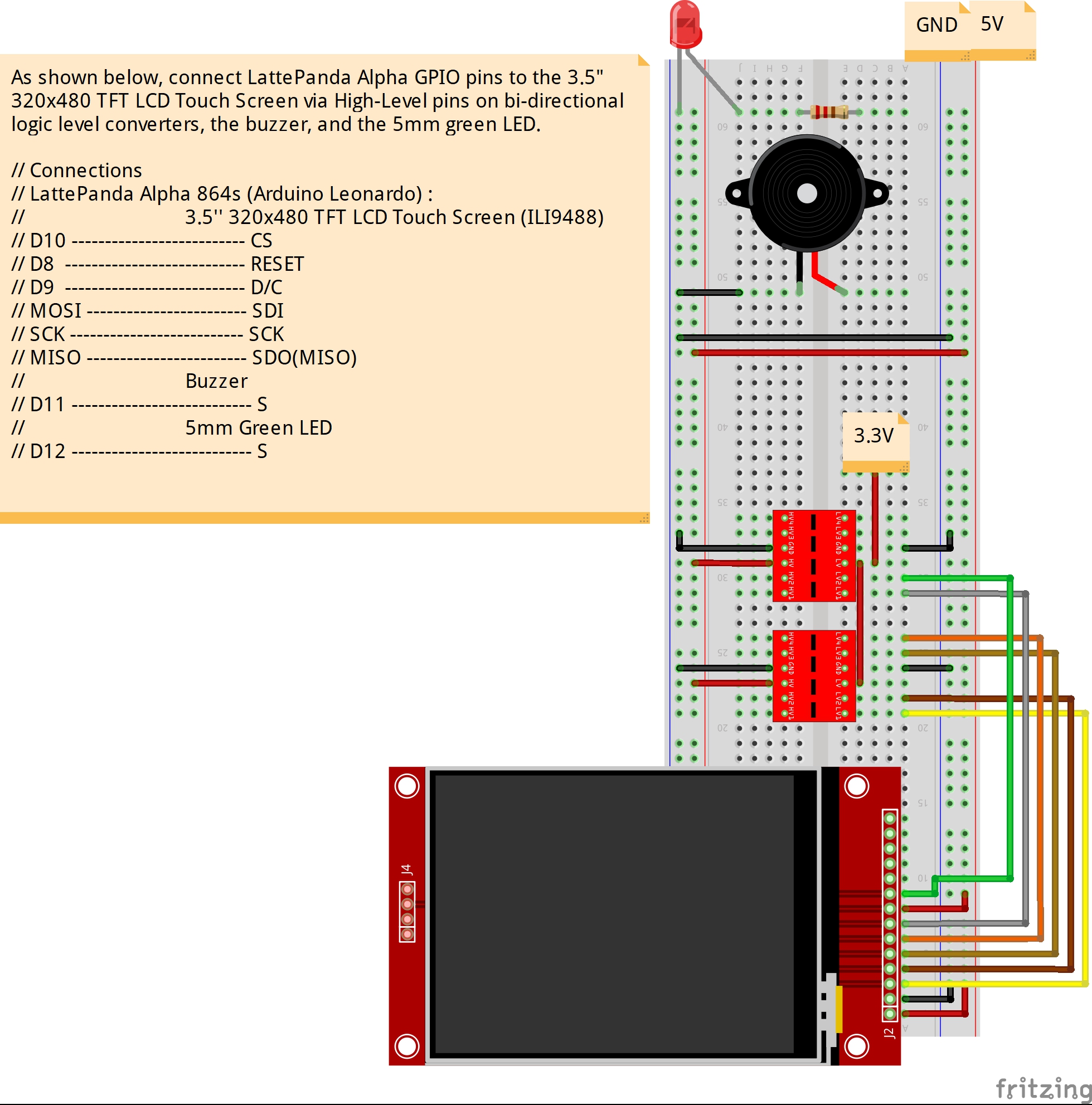 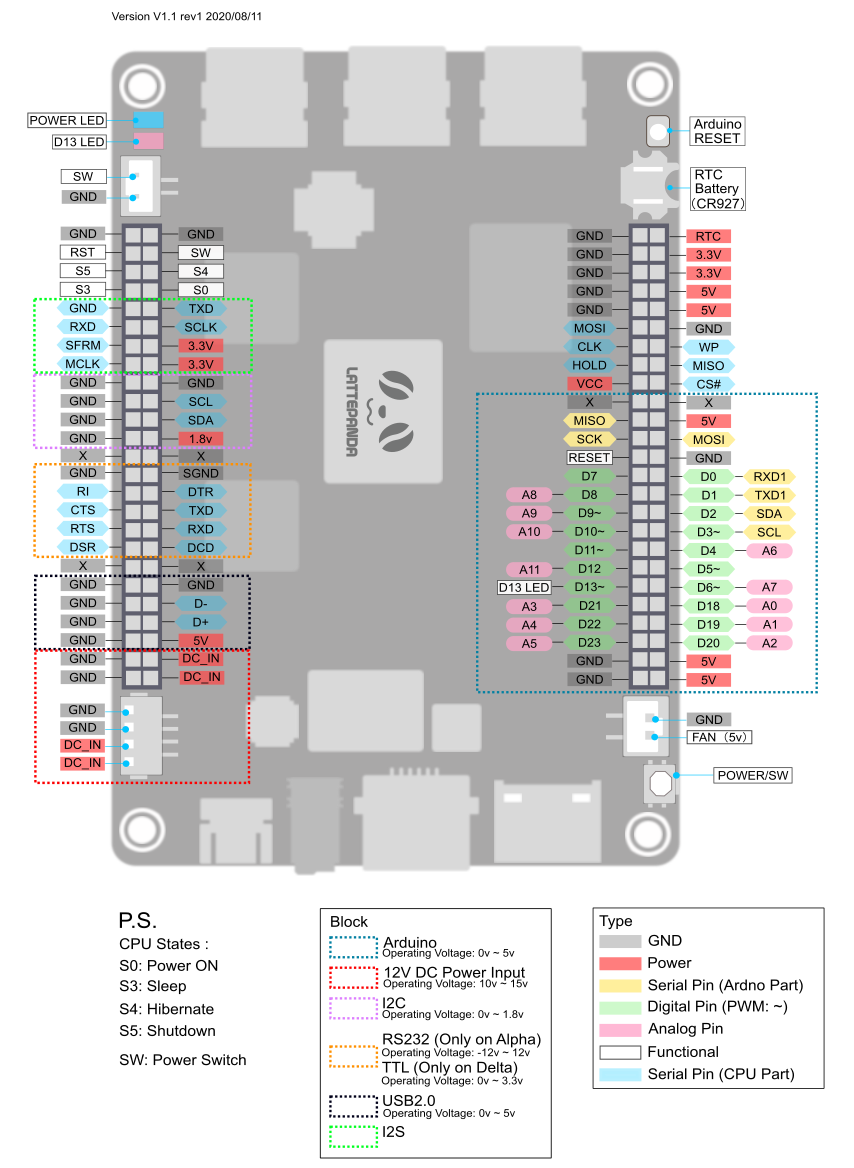