Turn the inexpensive but flexible LPC845 (ARM M0+) into an I2C co-processor to offload hard real-time requirements on complex systems.

Turn the inexpensive but flexible LPC845 (ARM M0+) into an I2C co-processor to offload hard real-time requirements on complex systems. 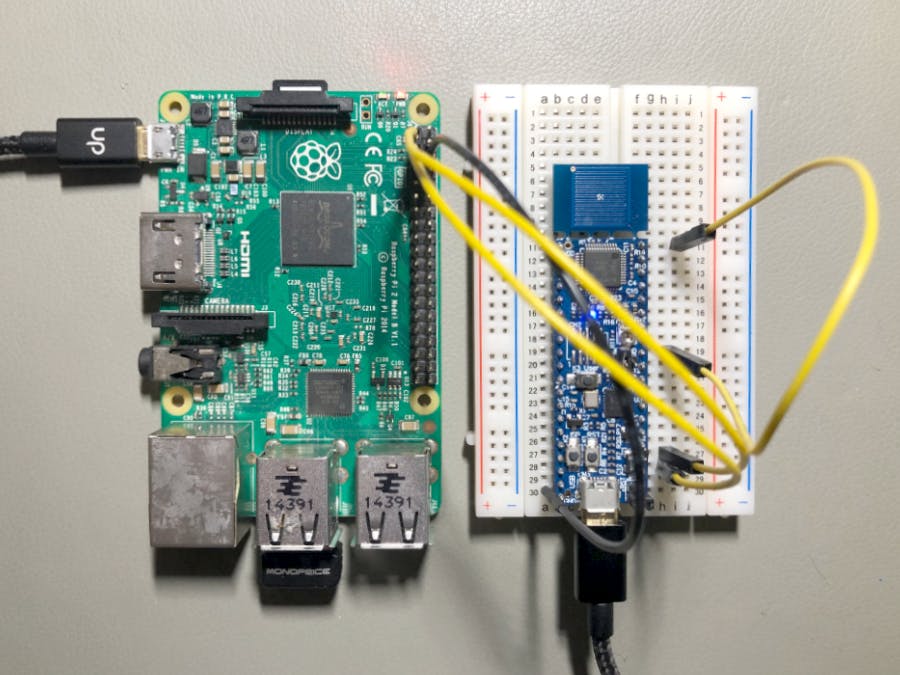 This project implements an extensible command parser that you can communicate with using the LPC845's I2C0 peripheral block in slave mode. It causes the LPC845 to behave similar to most I2C sensors, in that you interact with the coprocessor via a series of register reads and writes from any standard I2C master.

It is based on the minimalistic, super low cost LPC845-BRK from NXP (available for not much more than a decent drink), but is easily adaptable to any LPC84x board, and likely any LPC800 without too much extra effort.

The main purpose of this demo is to enable the use of the low-cost but relatively high-performance ARM Cortex M0+ LPC845 from NXP as an affordable real-time co-processor on systems that have no or limited real time control, such as the Raspberry Pi or other Linux-based embedded systems.

It can also be used in situations where the main MCU may not have enough pins, SRAM or peripherals, such as requiring an additional HW UART block with flow control, or driving a large number of timing-specific peripherals like NeoPixels.

Since the coprocessor communicates over I2C, multiple devices can be used in the same system by changing the I2C address accepted by the LPC845.

It's also just an excuse for me to keep up to date on what's new in the LPC device family, since I have a long, happy experience with them (my first ARM chip was the ARM7 LPC2148), and I'm always curious what's new peripherals and devices have been added.

There are two key parts of the LPC845 I2C coprocessor project:

The I2C0 peripheral is configured as a slave device responding to the address set in i2c_cfg.h:

The I2C engine has the following logic:

I2C commands are distinguished by a unique 8-bit opcode (or 'register'), and a registry of all of these commands is maintained as a singly-linked-list.

To add commands to the registry, you need to define a unique opcode for the command, and register the command information via cmd_register(struct cmd_record *rec), passing in an appropriate cmd_record instance.

NOTE: Because the command registry is implemented as a singly-linked-list, commands can be dynamically added or removed at run-time if you need to have the flexibility of only making specific commands available in certain situations.

For details on adding commands and implementing command handlers, see the README.md file on Github to make sure that you are looking at the latest updates.

This project makes use of the low cost LPC845-BRK from NXP, which includes an on-board debugger, and has minimal on board components which is always preferable (to me anyway!) on a dev board.

We makes use of two pins for the I2C bus, plus the common GND pin.

You MAY also need two 4.7K pullup resistors, which are required on the I2C bus to pull the SCL and SDA pins to logic high (connect the resistor between SCL and VDD, and SD and VDD). The I2C master (the device you are connecting the LPC845 to) may or may not have these available. If no pullups are present, the I2C bus won't work, but you will need to verify this on the platform you are using as the I2C Master.

The examples later in this readme use the ADC registers on the I2C co-processor, so you may want to connect the ADC CH0 to an appropriate load using the following pin:

The doc/examples folder contains a number of examples of how to communicate with the LPC845 coprocessor over I2C using a variety of common platforms.

You can easily connect the LPC845 I2C Co-processor to the Arduino using the standard I2C pins (SCL and SDA).

There are no 4.7K pullups on the Arduino by default, so you will also need to add two 4.7K (or similar) pullup resistors between the following pins:

Run the LPC845_coproc_arduino.ino sketch on your Arduino once you have connected the two boards are described above.

The Raspberry Pi contains HW I2C pins and support, meaning that you can communicate with the LPC845 I2C co-processor by connecting the LPC845 to the RPi using the SCL and SDA pins, and send and receive data in C or Python (or most other languages).

The following pins should be connected:

SCL (3) and SDA (2) ALREADY HAVE 1.8K pullups to 3.3V, so no additional connections or components are required here! The I2C pins can be connected directly together between the RPi and the LPC845, and the I2C bus will be automatically pulled high by default.

If you've setup a new Raspberry Pi using Raspbian, and you don't have it hooked up to a display or keyboard, you can use a USB serial adapter (FTDI, etc.) and connect to the TTY UART pins on the RPi:

With the cable connected between your desktop and the RPi, you can run a terminal emulator on your desktop at 115200 baud. For OS X or Linux, for example, you could use minicom (OPT+X to exit!):

When prompted for a login, the default username and password are

You will require network access for the apt-get install commands below.

Once network access has been established, the following commands should be run on the RPi to enable I2C support if it hasn't previously been enabled:

Before you can use I2C, you will need to enable it on the device. Run:

Then select Interfacing Options, I2C, and select Yes when asked Would you like the ARM I2C interface to be enabled?.

Finally, you should install the smbus library for Python if you wish to access I2C using Python:

You can now copy and run lpc845_i2c.py on your RPi, which will attemptn to connect to the LPC845 I2C co-processor and perform a few basic read and write requests.