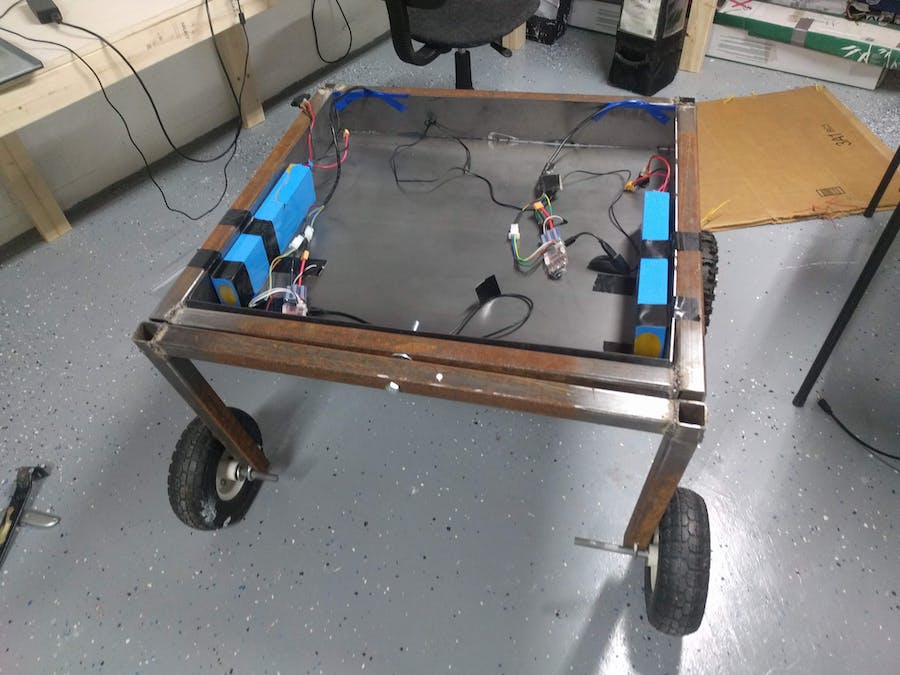 In 2011, I attempted to do a kickstarter for funding the R&D of a standardized open outdoor robotics platform. One goal being to create a platform that allows other engineers and makers to develop various applications. I found out that kickstarter does not fund R&D. So not having the money to build the whole robot, I selected the motor controller as a component to develop and then leverage that into building a robot.

I was able to spend the whole summer of 2017(as a part of my MSCS) working with a professor in France to develop the motor controller and frame. I made 4 iterations of the motor controller before finding an more viable option online: VESC. Since transitioning to the VESC, I have been able to control both motors with a wii remote via some ROS(robot operating system) scripts. They translate the wii remote joystick position into PWM duty cycles for each wheel.

I have iterated on the frame adding a steel box to house the batteries and controllers, to give some protection and better mounting. During one of the tests recently multiple weld joints broke and the whole rover collapsed into a pile of wheels, wires and steel. The whole rover had to disassembled and the frame was cleaned up and re-welded with a stronger(higher current) flux core welder. The frame has been very solid since this rebuild.
In Winter 2019-2020, I ported all of the python code to a C++ library to control the motors. All of the python ROS code was replaced by C++ ROS2 code. I got a battery supply for the TX1 and a PS4 controller to replaced the wiimote. All of the code was running natively on the TX1 instead of a laptop. The control was a lot more dynamic and I was able to drive it around the yard. This was a major milestone in proving that this low cost hardware can be the basis for this robotics platform.

I continue to polish some of the control algorithms but now that the hardware has been validated the harder task of adding Computer Vision and autonomous navigation has started.