Hands-on with the PocketBeagle: A $25 Linux Computer

Hands-on with the PocketBeagle: A $25 Linux Computer 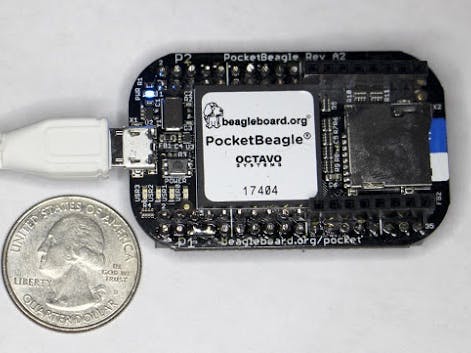 The PocketBeagle is a tiny but powerful inexpensive key-fob-sized open source Linux computer. It has 44 digital I/O pins, 8 analog inputs, and supports multiple serial I/O protocols, making it very useful as a controller. In addition, its processor includes two 200-MHz microcontrollers that allow you to implement low-latency, real-time functions while still having the capabilities of a Linux system This article discusses my experience trying out different features of the PocketBeagle, along with some technical details.

The PocketBeagle is a compact Linux computer, somewhat bigger than a quarter.

The PocketBeagle uses an interesting technology to achieve its compact size—it is built around a System-In-Package (SIP) device that has multiple dies and components in one package (see diagram below). The Octavo Systems OSD3358-SM combines the TI 3358 Sitara processor, 512MB of RAM, power management and EEPROM. 1 In the photo above, this package has a white label and dominates the circuit board.

The PocketBeagle is powered by the OSD335x, which combines a processor die, memory and other components into a single package.

The PocketBeagle is powered by the OSD335x, which combines a processor die, memory and other components into a single package.

To use the PocketBeagle, you must write a Linux file system to a micro-SD card. The easiest way to do this is to download an image, write it to the SD card from your computer, and then pop the SD card into the PocketBeagle. Details are in the footnotes.2

You can also compile a kernel from scratch, set up U-boot, and build a file system on the SD card. the PocketBeagle. There's a bunch of information on this process at Digikey's PocketBeagle getting started page. This is the way to go if you want flexibility, but it's overkill if you just want to try out the PocketBeagle.

Starting up the PocketBeagle

Unlike the BeagleBone, which supports a keyboard and an HDMI output, the PocketBeagle is designed as a "headless" device that you ssh into. You can plug the PocketBeagle into your computer's USB port, and the PocketBeagle should appear as a network device: 192.168.6.2 on Mac/Linux and 192.168.7.2 on Windows (details). You should also see a flash-drive style file system appear on your computer under the name "BEAGLEBONE". If the PocketBeagle has the default Debian OS3, you can log in with:

Connecting to the PocketBeagle's serial console

While ssh is the simplest way to connect to the PocketBeagle, if anything goes wrong with the boot or networking, you'll need to look at the serial console to debug the problem. The easiest solution is a UART Click board4, which gives you a serial connection over USB. You can then connect with "screen" or other terminal software: screen /dev/cu.usbserial\* 115200

Accessing the PocketBeagle's serial console through an FTDI interface.

Accessing the PocketBeagle's serial console through an FTDI interface.

The PocketBeagle has two headers that provide access to I/O functions. (These headers are different from the BeagleBone's headers, so BeagleBone "capes" won't work with the PocketBeagle.) The PocketBeagle pinout diagram (below) shows what the header pins do. The diagram may seem confusing at first, since each pin has up to three different functions shown. (Most pins actually support 8 functions, so more obscure functions have been omitted.) The diagram is color coded. Power and system pins are labeled in red. GPIO (general-purpose I/O) pins are white. USB pins are blue. Analog inputs are yellow. UART serial pins are brown. PRU microcontroller pins are cyan. Battery pins are magenta. I2C bus is purple. PWM (pulse width modulation) outputs are light green. SPI (Serial Peripheral Interface) is brown. CAN (Controller Area Network) is dark green. QEP (quadrature encoder pulse) inputs are gray.9 The dotted lines in the diagram indicate the default pin functions (except for the PRU pins, which default to GPIO).6

Note that the diagram shows the headers from the component side of the board, not the silkscreened side of the board. Comparing the pin diagram with the board (below), you will notice everything is flipped horizontally.E.g. GPIO 59 is on the right in the diagram and on the left below. So make sure you're using the right header!

One tricky feature of the Sitara processor is that each pin has up to eight different functions. The motivation is that the chip supports a huge number of different I/O functions, so there aren't enough physical pins for every desired I/O. The solution is a pin mapping system that lets the user choose which functions are available on each pin. 7 If you need to change a pin assignment from the default, the config-pin command will modify pin mappings. (Some examples will be given below.) Pins can also be configured at boot time using a "U-Boot overlay".8

The PocketBeagle exposes 45 GPIO (general purpose I/O) pins on the headers. The pins can be easily controlled by writing to pseudo-files. For example, the following shell code repeatedly blinks an LED connected to GPIO 11110 (which is accessed through header pin P1_33).

An LED connected to header P1 pin 33 can be controlled through GPIO 111.

An LED connected to header P1 pin 33 can be controlled through GPIO 111.

One of the most interesting features of the PocketBeagle is its PRUs, two 32-bit RISC microcontrollers that are built into the Sitara processor chip.These microcontrollers let you perform time-critical operations (such as "bit-banging" a protocol), without worrying about context switches, interrupts, or anything else interfering with your code.At the same time, the ARM processor gives high performance and a complete Linux environment.(I've made use of the BeagleBone's PRU to interface to a vintage Xerox Alto's 3 Mb/s Ethernet.)

Although the PRUs are not as easy to use as an Arduino, they can be programmed in C, using the command line or Texas Instruments' CCS development environment. I've written about PRU programming in C before (link) and the underlying library framework (link) for the 3.8.13 kernel, but since then much has changed with the way the PRUs are accessed. The PRUs are now controlled through the remoteproc framework. In addition, a messaging library (RPMsg) makes it simpler to communicate between the PRUs and the ARM processor. A "resource_table.h" file provides setup information (such as the interrupts used).

The following code will turn the LED on (by setting a bit in control register 30), wait one cycle (5ns), turn the LED off, and wait again. Note that the PRU output is controlled by modifying a bit in register R30. This will blink the LED at 40Mhz, unaffected by any other tasks, context switches or interrupts. (For the full code and details of how to run it, see my github repository.)

This code uses PRU0 output 1, which is accessed through header pin P1_33 (the same pin as the earlier GPIO example). Since this pin defaults to the GPIO, it must be switched to a PRU output:11

This LED example illustrates two key advantages of using the PRU versus controlling a GPIO pin from Linux.12 First, the PRU code can operate much faster. Second, the GPIO code will produce an uneven signal if the CPU is performing some other Linux task. If you can handle milliseconds of interruption, controlling GPIO pins from Linux is fine. But if you need exact cycle-by-cycle accuracy, the PRU is the way to go.

Unlike the BeagleBone, the PocketBeagle doesn't have a built-in Ethernet port. However, there are several options for connecting the PocketBeagle to the Internet, described in the PocketBeagle FAQ. I found the easiest was to use WiFi via a WiFi adapter plugged into USB, as shown below. An alternative is to share your host computer's Ethernet, which I found more difficult to get working.14 Finally, you can add an Ethernet interface to the PocketBeagle using the expansion headers.

A USB WiFi adapter can easily be connected to the PocketBeagle.

A USB WiFi adapter can easily be connected to the PocketBeagle.

A closeup of how to plug the USB breakout board into the PocketBeagle. It is connected to pins P1_7 through P1_15.

A closeup of how to plug the USB breakout board into the PocketBeagle. It is connected to pins P1_7 through P1_15.

For instance, you can plug in a flash drive. (In the picture below, note that the flash drive is almost as big as the PocketBeagle.) The lsusb command will show your device, and then you can mount it with sudo mount /dev/sda1 /mnt .

Connecting a USB device (flash drive) to the PocketBeagle.

Connecting a USB device (flash drive) to the PocketBeagle.

In the photo below, I hooked up a light sensor (CdS photocell in a voltage divider) to provide a voltage to analog input 0 (header pin P1_19).The reference voltages come from header pins P1_17 (analog ground) and P1_18 (analog reference 1.8V).More light on the sensor produces a higher voltage, yielding a higher value from the input.

A photocell can be hooked up to the PocketBeagle's analog input to provide a light sensor.

A photocell can be hooked up to the PocketBeagle's analog input to provide a light sensor.

The PocketBeagle supports two SPI ports and two I2C ports. These serial protocols are popular for controlling chips and other devices.

An accelerometer board (left) can be connected to the PocketBeagle's I2C port with four wires.

An accelerometer board (left) can be connected to the PocketBeagle's I2C port with four wires.

For example, the photo above shows a cheap I2C accelerometer board connected to the PocketBeagle's SPI port. Simply wire the power, ground, SCL (clock) and SDA (data) between the accelerometer and the PocketBeagle's I2C1 port (i.e. header P2 pins 13, 15, 9, 11). Probing for I2C devices with i2cdetect will show that the device uses address 68. The device can be turned on with i2cset and the registers dumped out with i2cdump to obtain acceleration values.16

Using an I2C-based accelerometer board with the PocketBeagle.

Using an I2C-based accelerometer board with the PocketBeagle.

The PocketBeagle is a low-cost, compact Linux computer, able to control external devices with its I/O ports and GPIO pins.Since the PocketBeagle was released recently, there isn't a whole lot of documentation on it.Hopefully this article has shown you how to get started with the PocketBeagle and use some of its features.

Two IBM SLT modules, with a penny for scale. Each module contains semiconductors (transistors or diodes) and printed resistors wired together, an alternative to integrated circuits.

Two IBM SLT modules, with a penny for scale. Each module contains semiconductors (transistors or diodes) and printed resistors wired together, an alternative to integrated circuits.

Then write the disk image to the SD card:

Writing the image took about 10 minutes with a USB to micro-SD adapter. (If it's taking hours, I recommend a different USB adapter.) When done, install the SD card in the PocketBeagle. ↩