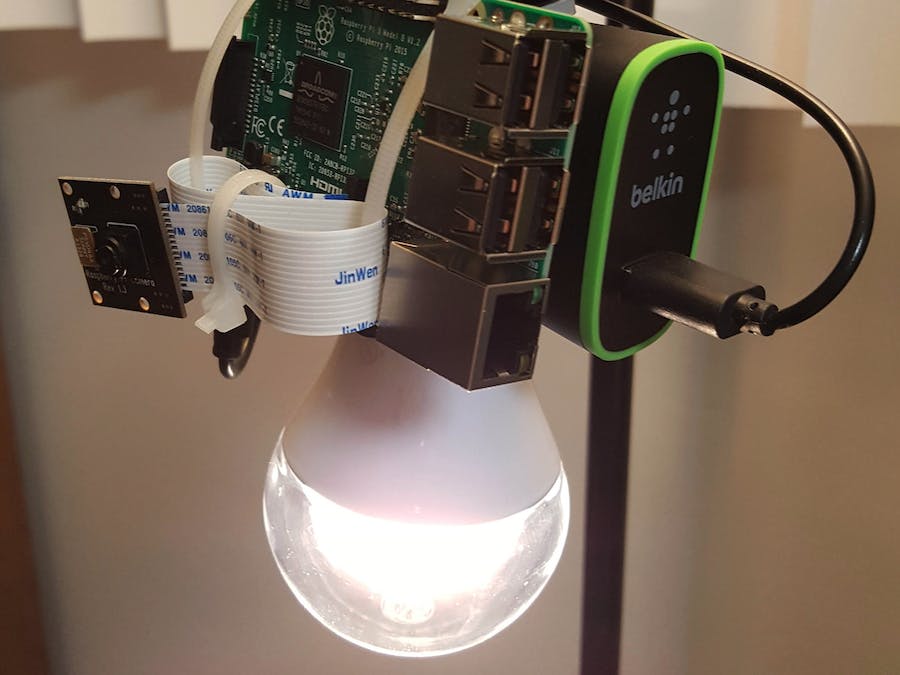 Security cameras are still complicated to install, setup, and use. Most require a technician or a handful of frustrating calls to various tech support places. And the average person may still not be able to see a video feed outside of their local home network.

2 primary components that all video cameras require are power and data. For medium to higher end setups this means running cables. Even cams that have Wi-Fi still require a power source that better be somewhat close to an outlet unless you want to change batteries (wireless power hasn’t hit the big time yet).This could get even more complicated if you want to put this security cam outside. Now it needs to be weather proof, within Wi-Fi range, and power source.

What if there was already a convenient but over looked power source in all the locations you would want to place a security camera around a house?

Enter the humble light bulb socket… There is at least one in every room, by the front door and the back door, even in front of the garage.

An indoor/outdoor security camera that you can plug into any light socket and remote control from any phone, tablet, or laptop.

Concept for Alpha version or proof of concept parts list …

Painless pairing … connect to a mighty lightyjust like you connect a phone with a new chrome cast.

Raspberry pi could run either linux or windows 10 IOT ….

Get notifications from the apps… object detection emails, texts or twitter

Notification if someone inevitably turns that light switch off .. warning running on battery power

Also works with nest or other smart home hubs

Getting to a working prototype....

lights on with live video stream over wifi

After switching to the alternative lighting with the smart bulb I was able to put it together pretty quickly.

I installed MotioneyeOS and took the stock raspbian off. Out of the box it is very functional for this particular case but for a production model or consumer version the software would have to be even more user friendly for non tech people. Which is the whole point of this project.

Switching to the smart bulb also meant switching to a slightly different light socket adapter with a 2 prong outlet on the side.

This version of the prototype achieved the following things:

This prototype uses the ge A19 as they were the ones I had access too instead of the ge C. As far as I can tell the main difference is Bluetooth connectivity vs the wifi wink adapter. But light control from an app would be basically the same.

One of the limitations of this alpha version is lack of a weather proof enclosure. but the size of the board and power adapter made that a little difficult. Also do to time constraints printing one this size on my printer would take over 8 hours.

I did experiment with some thermal sheet plastic where it might make more sense to vacuum form an enclosure and it came out looking more like a rough lamp shad.

While I was sourcing parts for this build the pi foundation released an updated version of the pi zero that now includes a ribbon connector for the pi camera. They also updated the pi camera to an 8 mega pixel Sony. I still went with the older version because it was cheaper and worked just fine. The only thing I didn't like about the camera was the ribbon cable. For a project like this the ribbon cable doesn't offer much in the area of flexible positioning. Its kinda stiff and doesn't like being twisted. Fixed camera placement could be an issue. The next version could get around that by having 2 cameras ... one that points out and another that looks down or a 360 lens cam that just virtual reality rigs are using.

The pi 3 worked very well its just a matter of size and that many of the features it has just aren't necessary. I do like that it has wifi built in though. For the next build I will go with either the new pi zero or the chip if it actually starts shipping.

With a version 2 I will probably spend more time on the power supply. It would work out better and save space to have an adapter that goes straight from the light socket to usb. This way it wouldn't require 2 adapters near the socket where space is the most limited. Design wise there is also a line here where you are either replacing the whole light fixture or just adding functionality to the bulb.

I would also like to spend more time on the software even though MotionEyeOS is very capable as far as camera functionality goes it doesn't do much beyond that at this point. While it is basically just a gui for the underlying motion software that does the actual image manipulation. I would like to have something that is node / javascript based and more versatile web app where you can control everything in a more seamless experience and offer compatibility with things like push notifications, IFTTT , and Openhab.

One of the ways I was thinking about painlessly pairing a mighty lighty to a mobile device upon first setup from the app was for the app to ask for the wifi name and password. The app would then encode that info along with the ip number of the mobile device and possibly a randomly generated number into something like a qr code. You would then show the qr code on your screen to the camera on the lighty. the lighty would then take the info from the qr code and connect its self to the wifi and then ping the mobile device at the ip number with the randomly generated id and it would then be authenticated.

Because previous IOT devices have picked up a reputation for not being very secure I would make the video stream local network only with an option in the app to make it available online outside the home network for a small monthly fee. Pushing the button to accept the fee and make it available online would spin up an encrypted instance on some cloud hosting of a private video server.

The future of lighting

While I was working on this project it struck me that all lighting since the first light bulb was created has basically been a single purpose device. In the future I believe that providing light will become a secondary function of lights in a room. Much like calling as become a secondary function of a smart phone. Current generation of app controlled led lights basically just let you turn them on or off and change color. There is so much more possibility there that hasn't been tapped into.

What if the Mighty Lighty was a platform of connected lighting options. How many sensors could we fit into a light fixture. I think I could add a mic for ambient noise levels and temperature sensors. With one in every room you could create a rough outline of the home. The lighty that is in the living room will hear tv noises, the lighty that is in the kitchen will hear cooking noises, the lighty in the wash room would hear the washer and dryer...

there is a point on privacy here that there should be 2 options for ambient noise processing where setting one would not be sharp enough to make out words people are saying and another option that can hear words and integrated with your voice bot of choice like amazon, google, or siri....

with a platform like this you could start building out a real smart/connected home experience. It would not take much to build a security system on this where the lighty system knows if a person is in the room or not. You could do things like triangulate loud things like a window breaking as the sound propagates thru each room.

might lighty weather edition would be an outdoor camera light perfect for porch lights or in front of garage doors... there would suddenly be 100s or 1000s of weather stations across a city

mighty lighty video edition could have an integrated pico projector and throw images/videos on walls and table tops.

To make something like this work a connected lighting platform would need very robust and redundant data connections. wifi can be flaky if they have an old router... Bluetooth can be tricky depending on which version of Bluetooth their mobile device has... Why not have the lighty mesh networked through the same power lines that way they can talk to each other. For lighties placed just out of reach of a home network they could have lte or sms connection options. This bandwidth limitation also changes into the future as the speed of home data connection are increased to 1 gig.

A lighting system of the future would not be complete with out being integrated with some form of AI. Like I mentioned earlier having a voice bot like amazon alexa is not really AI yet. AI takes a lot of compute power. To better position the mighty lighty platform as the best it can be would mean to give it more resources than it actually uses at the beginning. Like instead of putting bare minimum cheap compute why not put the most powerful arm chips as possible under the constraints of cost, heat, and size. Why not have an AI add on module that plugs into any wall outlet to be added to mighty mesh network. The brains of this AI add on module would be something like an nvidia tx1 that is capable of image detection without relying on cloud power. With that the camera enabled lighties would be able to learn the faces of who lives in the house and who does not. An AI module would remove the limitations of running apps only from mobile devices from the android or apple software and also the limitation of the mobile hardware. Not everyone has the newest apple or Samsung devices. A connected lighting platform should be able to offer the same experience with any of them.

An AI like this would be capable of far more and be able to do more with this whole home awareness. Like knowing if you have been in a room for an unusually long time. Its wednesday and you normally only sleep for 6 hours on Wednesdays but you've been here for 12. It could ask if you need help if it gets no response after multiple attempts it could call or text 3 people to come check on you or even request emergency services in more extreme situations.

A connected whole home lighting platform like this would also need an API so people and companies could integrate with it. Yes this would be like an app store for a smart home. But mostly for makers like myself would be free to tinker with it and also because a connected home like this would take a lot of software to be able to do everything it can do.

Another benefit of having both the robust connectivity and the powerful AI would be that more data could stay within the house. Saving bandwidth while putting privacy first. The treasure trove of granular data a system like this would provide should be something people opt into with obvious benefit not something they have to opt out of that only benefits the data miners.

One thing for sure is whole home connected platforms are the future. Its just a matter of time before light switches are suddenly obsolete.