Pi to Azure to Alexa

Pi to Azure to Alexa 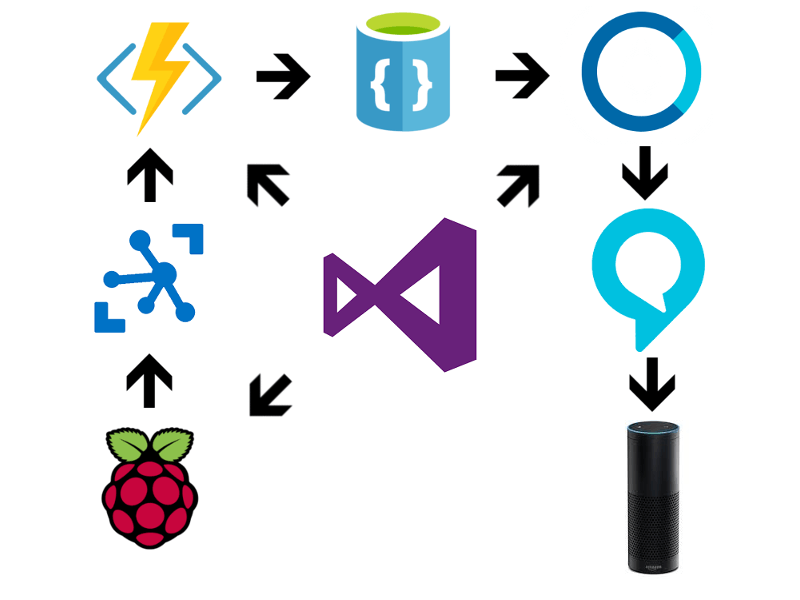 This project is about surfacing information from a Raspberry Pi through an Microsoft Azure infrastructure to an Amazon Alexa Skill. This could be an architecture that would support telemetry data collection over time by automating the collection, transport and storage of data from a Raspberry Pi. Maybe the most obvious example of a system like this would be a weather station that cyclically collects data from sensors.

This project contains many detailed steps which will not be completely outlined step-by-step in this story. I will try to pull together all the resources necessary to replicate the project and point out details that took me hours to track down solutions.

The order in which to execute these steps can vary. You can perform the steps in any order which interests you or meets your goals. I can provide the sequence of steps that I went through to complete the project.

You will need to setup your Amazon Echo going through the Setup Instructions provided by Amazon.  The Amazon Echo Support page has links to many other support documents describing how to use and troubleshoot your device.

Install the Windows 10 IoT Core on your Raspberry Pi.

Setup and get familiar with Managing a Windows IoT device using the IoT Dashboard and Device Portal apps.

Here is a sample IoT background application for generating a random number, build a IoT message and sending the message to the IoT Hub. You can comment out the IoT code until we get to that step below. The sample solution also contains a sample IoT client console application to view the IoT messages as they are sent by the Raspberry Pi. More on this once we get the IoT Hub created.

Deploy your background application to the Raspberry Pi

Use Visual Studio to create a ASP.NET Web API Project hosted in Azure App Service. Of course you will need an Azure account if you don't already have one.

Use NuGET Manager to Update the Api project to the latest versions.

It doesn't make sense to list the versions I see as that will continuously change. I simply updated the project to the latest versions and resolved any conflicts until I had an updated and stable build.

AlexaSkillsKit.NET and Microsoft.Azure.DocumentDB are the two NuGet packages that need to be installed.

Create an AlexaController, DocumentDbClient, a model class to represent your data, Alexa Speechlet Class and Supporting files as seen in the following screenshot.

Screenshot of project showing the added classes and supporting files.

You can go to the repository and see the contents of these files. Build the project once you have all the code arranged.

Create the Azure Function to process the Azure IoT Hub

Run and Test the Sample

Deploy and Test the Raspberry Pi Connection to IoT Hub

Publish and test the Alexa Speechlet