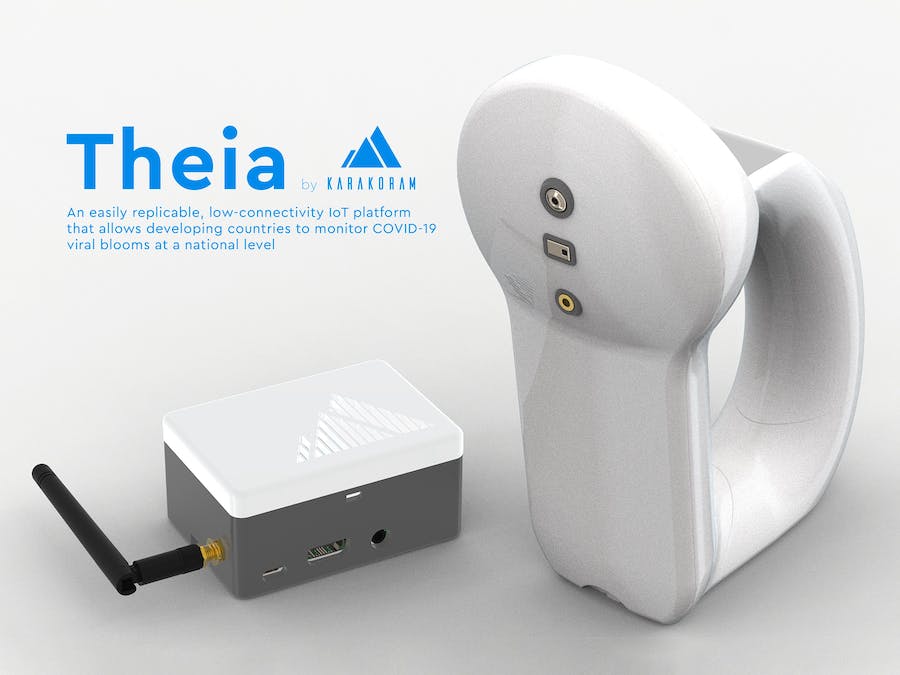 Project Theia is a low-cost, low-connectivity IoT platform designed for developing countries with minimal healthcare infrastructure, disrupted (or substandard) telecommunications networks, and a limited real-time national health data system. Often the countries with the most limited healthcare systems are also those with the smallest real-time health data, which could allow them to spend their limited healthcare resources where they are most needed. Using long-distance IoT radios, modern data collection and analytics frameworks, and low-cost components, Theia creates an immediate, on-the-ground emergency health network that offers a national level, if simplistic, real-time health data layer. When implemented, Theia would allow a developing countries healthcare system to make more intelligent decisions on where to deploy, enabling a country to triage its COVID-19 response effectively, focusing on the belief that 'something is better than nothing' in light of a global pandemic involving countries with far too little real-time health data mapping.

We are Karakoram, a global, distributed, volunteer developmental innovation team that disrupts conventional thinking and builds solutions to the world's toughest challenges. We use rapid prototyping and Agile production methods to create everything from physical and digital platforms, organizational design, and experimental policy. Over the past three months, our team has designed Project Theia as a multiple product IoT platform that both detects individual temperatures on the ground with a fully developed contactless smart thermometer and FLIR camera paired a custom IoT analytics and reporting hub.

This platform functions by having one, or more, of the Theia Thermometers in use throughout a community that may be at risk within a developing country, capturing data points of the local population while checking for fevers on the ground. While a single temperature reading is not indicative of COVID-19, with several unrelated reasons that a person might have a fever, a change in the mean average of an entire community is indicative of a more infectious disease circulating amongst the target group. Each thermometer has a built-in 'LoRa' (Long Range) IoT radio capable of sending data over 2km to the Hub.

The Theia Hub listens for data transmissions in the particular unlicensed, LoRa radio spectrum in each location, and writes anonymous data points to a database within the Hub itself. The data is then analyzed and interpreted by the Hub and served by a self-hosted web front-end.

Our project-theory is that with the use of multiple Theia Thermometers and Theia Hubs, a developing country with limited healthcare services would have the necessary real-time data on where average mean temperatures are increasing nationally. Project Theia offers the ability to distribute limited healthcare services intelligently, without the need for established telecommunication networks (3G/4G/WiFi, etc.) or traditional track and trace methods.

We feel that the Theia system addresses our insight in the following ways:

The Theia platform is comprised of the following components:

Contactless thermometers, while useful placebos for emotional security during a pandemic, are largely inaccurate for detecting COVID-19 due to the high number of other reasons that someone might have a fever. However, a sudden shift in the mean average temperature of a community body temperature would be an interesting metric for an outbreak of an incredibly infectious disease such as COVID-19 that could cause a change in the average temperature of a sample group (such as a village or community). Therefore the software running on the Theia Hub, the Theia Platform, is a software stack that enables the capture and basic computation of 'Community Temperature Averages', which do indicate changes to community health at a macro level.

Here is a link to a data reading from our dashboard after an evening of capturing lots of temperature metrics and having the hub calculate an average: https://snapshot.raintank.io/dashboard/snapshot/EoFXgk3VQFDwi0iBqA2MWdkdxspF5LX9

To begin, ensure you have all the components you need. You can either look at the EBOM attached to this tutorial, or for a slightly more fun way of looking over our components, watch the following video:

Much of the Theia Thermometer electronics revolve around how they connect into the Adafruit Feather mainboard. While it is possible to solder all of these connections onto a perf or stripboard, we've made it significantly easier by creating a custom PCB for a daughterboard that can easily be printed by professional PCB manufacturers and either assembled by the pros (PCBA) or shipped back unassembled (PCB) and through-hole mount assembled by you. Ours were manufactured by PCBWay, who offered to sponsor the production of our boards and were fantastic partners on this project. Not only because they were kind enough to support us for this challenge, but also because their printing is some of the best I’ve seen in a while, I'd recommend them for this type of project!

If you go the route of ordering the PCB printed and assembled, here is how you through-hole mount the parts:

We've included a link to the daughterboard GERBER file for PCB printing in our schematics link, but you can also find this here: https://github.com/zingomarket/project-theia/tree/master/theia_GERBER

If you go the route of manual assembly on a perf or stripboard (which we would not advise), here is a Fritzing diagram and connection table. We've also included our Fritzing diagram in the components section.

Now that you have your Adafruit Feather & Karakoram Daughterboard paired, there is a small amount of work to be done to prepare our smart thermometer to be assembled.

The next part of our platform build is to create the Theia Hub, which receives LoRa radio transmission, records them, and hosts a front-end for calculating and distributing signs of a viral bloom. The critical parts for this build are:

Warning: Always use your SX1278 LoRa module with the correct MHz antennas; else the module might get damaged, e.g I use a 433MHz antenna with my 433Mhz SX1278 because 433Mhz is the unlicensed LoRa spectrum in the UK where I live.

You can use the below connection table and Fritzing diagram to see how the connections to the Geeekpi DIY Proto-Hat Shield work.

Now that you have completed your Theia Hub electronics, it's time to assemble the parts into its physical enclosure.

We have built the Theia Thermometer as both a contactless thermometer and a low-cost FLIR camera. However, V1 of the software does not include the thermal camera FLIR functionality due to current incompatibilities in the firmware needed for RadioHead RH95.h LoRa radio library and SPIxx.h, the accelerated SPI library needed for interpolating pixels in the thermal camera. We aim to release a V2 software in the coming month that allows for both FLIR camera and RadioHead functionality. In V1 we have therefore turned off the FLIR functionality in order to focus on mission-critical functionality including accurate contactless temperature capture and transmission to the Theia Hub over LoRa.

That's it, you’re done! Now you should be able to capture temperatures using the Theia thermometer, and they should both write to Theia.py, and record the data in real-time to InfluxDB and display in Grafana.

Theia.py should write out the data points it records as it writes it to InfluxDB.

It should automatically calculate averages, as well as plot the temperatures in a few useful ways.

We have included the AMG8833 thermal camera as part of our build. Initially, we had planned to include a low resolution/low-cost FLIR camera as part of our product. However, the enhanced SPI firmware needed to operate the interpolated 64x64 FLIR camera (upsampled from the 8x8 AMC8833) is directly inoperable with the default SPI firmware required by the RadioHead LoRa library.

We plan to continue working on this and release an updated V2 of the software in August, which includes both temperature reading and FLIR capabilities, with the LoRa radio. We also intend to use the Edge Impulse machine learning framework to parse the data collected in V1 to improve our ability to deploy healthcare workers intelligently.

At the average cost of USD $20-80 (depending on each countries ability to negotiate the wholesale price for commercial components) per 2km radius of populated land, it leverages the power of LoRa IoT communication standard to monitor a countries health without the need for large commercial telecommunication networks such as 3G/4G, or even a reliance on WiFi.

We believe that Theia is the most effective solution to giving a developing country, with limited healthcare services, and often without a reliable telecommunication network, to triage their COVID-19 outbreaks, sending doctors and nurses where they are most needed.

Thanks go out to a considerable number of people for making this project possible. This project was indeed a global effort, with member partners in China, the United Kingdom, and the United States.

Andrew Osula and Anurag Kurapati for their support and partnership in industrial design and mechanical engineering, joining me in the core team and showcasing how an extraordinary innovation team can operate. The result of our project speaks for itself, with an end product that looks as good as it functions, with a real balance between form and function.

Owen Murphy, without whom we would have neither had a professionally designed PCB, nor gotten our firmware working. His background in electrical engineering and embedded software design was invaluable.

PCBWay, who donated their time, PCB stock, manufacturing capabilities, and financial support on this Theia project. Their expert experience in PCB printing offered us a leg up, ensuring that our processor looked and functioned professionally. PCBWay's partnership on the project showed how a United Nations innovation challenge could enable true global collaboration in the face of shared adversity.

1 project • 2 followers
Karakoram is an award-winning innovation consultancy that addresses the world’s toughest challenges with research, design and engineering.
ContactContact

0 projects • 1 follower
ContactContact
Thanks to Owen Murphy and PCBway.