In this tutorial I'm going to show you how to play favorite x86 games on Raspberry Pi.

In this tutorial I'm going to show you how to play favorite x86 games on Raspberry Pi. 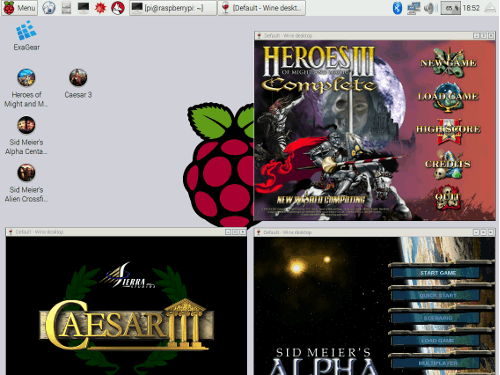 If you own a Raspberry Pi, you probably know that it has some games and applications already installed, like Minecraft, the browser, Mathematica, etc. And if you are also a gamer, you've definitely heard about RetroPie and have probably already tried it. But what you also should know is that when it comes to x86 platform, RetroPie will only allow you to play some very old DOS, first-generation PS, N64 etc. games. So lots of your beloved titles will stay out of reach. However, there is a solution. And today I will tell you about it.

First of all you will need to install special software, Called ExaGear Desktop. This one will allow you to run not only x86 games, but also many other apps, Like Skype, Spotify, etc.

After you get it you'll receive an email with detailed instructions on how to download and install it on your Pi.

Then install and activate ExaGear on your Raspberry Pi by running the 'install-exagear.sh' script in the directory with deb packages and one license key:

Make sure that you are in x86 environment by running the ‘arch’ command:

It is recommended to update apt-get repositories on the first launch of the guest system:

In order to be able to launch x86 games you will need Wine. Install it inside ExaGear by entering the following command in Terminal:

After installing Wine it is recommended to run winecfg:

and enable the “Emulate a virtual desktop” bar. Otherwise you can face issues when application will try to switch to full-screen mode.

Now all preparations are finished and you can proceed with installing and running PC games. I will use Sid Meier’s Alpha Centauri as an example.

It’s possible to run a different kind of distros and installers, but in some cases you need to do unobvious tricks to make it work. That’s why it's better to use DRM-free versions of games from the GOG site, as this is the most straightforward way to launch a game.

I'd recommend to download Sid Meier’s Alpha Centauri from GOG.

The graphical interface of the game installer will show up and you can proceed with installation. After installation is finished you can run Alpha Centauri directly from Raspbian desktop or from the start menu. You might need to wait until the game is loaded. Then select a faction and start your space colonization.

The same way you can install and play many more other x86 games on your RPi.