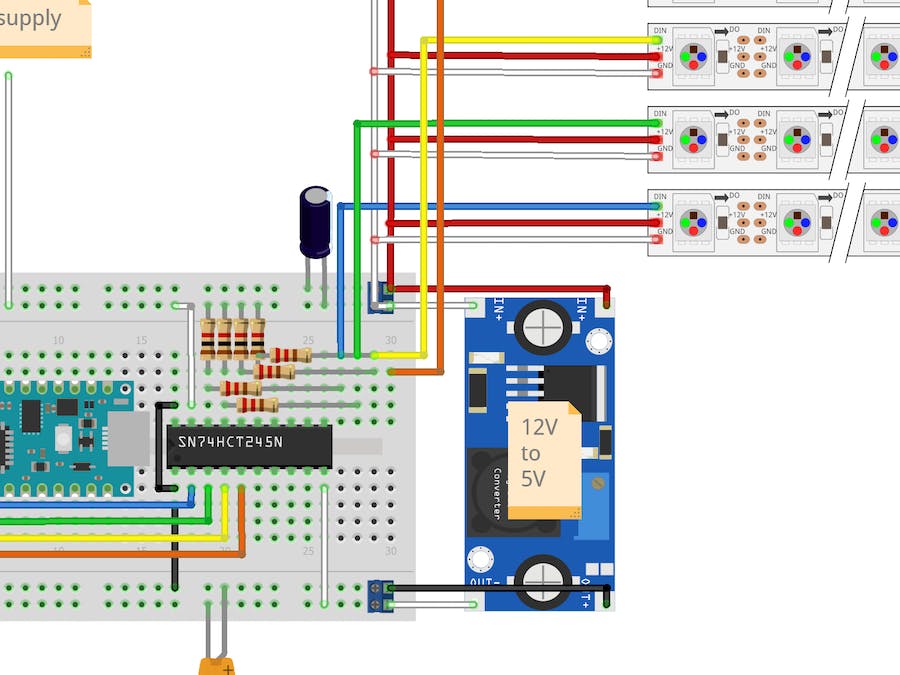 Last year I realized that the safest way to display lights for the holidays would be to make a permanent installation using LEDs. After trying a few commercial LED controllers, I wasn't happy with the limited options for effects (no red, white and blue??), so I decided to create my own controller. I now have several of these controllers throughout my house for LED lighting effects. The first controller was mounted near my roof line to control a couple hundred WS2811 LEDs.

This project represents the third iteration of the controller. It is the first version to use a level shifter instead of a TTL NOT gate to convert the Nano's 3.3 volt output to 5V TTL for the LED strip. I had a lot of trouble getting the level shifting to work. I'm not sure using a level shifter is better than using a TTL NOT gate. The level shifter requires an additional 1K pull-down resistor to control inductive noise on the LED data line. The TTL NOT gates did not require this 1K resistor. Keep this in mind if you build this circuit. If you have any noise problems, then consider switching to a NOT gate. Just run the Nano output through two of the NOT gates to level shift and then un-invert the logic.

This project uses the Arduino Nano 33 IoT, the Arduino IoT Cloud, and optionally streaming ACN or Alexa to control 12 volt WS2811 LEDs. There are 4 connectors for 4 LED strips and each strip can chain together hundreds of LEDs. The default code sends the same effect to all four strips but this can be easily customized in the main TreeController_dec27a.ino file. The Arduino IoT Remote app can be used to control your lights from your mobile device. You can also link your IoT cloud account to Alexa and use it for voice control of your LEDs.

This project should also work with 5V WS2812 style LEDs. Just substitute a 5V power supply for the 12V supply in the schematic. Also change the call to FastLED.addLeds() and pass in WS2812 instead of WS2811.

Here is how to install this project.

a. int bpm - beats per minute for the plasma effect

b. CloudColor color1 - color for effects that need multiple colors

The circuit assumes you will have a 12V DC power supply for your WS2811 LED strip(s). I connected ground, +12V and the data line through JST connectors. If installing outdoors, I suggest you use waterproof automotive connectors instead. Power injection will also be needed if you have more than a dozen or so LEDs or else the far away LEDs will be dimmer due to voltage drop across the LED strip. I've seen 12V WS2811 LEDs work with as little as 7V, though.

Assemble the circuit following the diagram schematic.png attached to the sketch. 1K Ohm pull - down resistors are used on the level shifter output. My oscilloscope tells me that's the best way to reduce inductive feedback on the data line going to the LEDs. 220 Ohm resistors are also placed in series withthe data line. This also reduces noise and prevents the LEDs from flickering, especially when turned off.

I used a LM2596 DC - to - DC voltage buck converter to step down 12V to 5V for use with the level shifter. These converters are probably overkill (3A output!) for running just one IC but my experimenting shows they work the best. You will need to adjust the potentiometer on the converters to get the 5V output required. Mine didn't come set to 5V.

Note that I left off the Cloud Connected status LED that goes to PIN 12 of the Nano. I plan on adding that later after I put this circuit board into an enclosure.

Upload the code contained in this sketch on to your board using the upload button in your thing's code editor.

├── schematics.png => an image of the wiring diagram

├── effect.h => Base class for all effects

├── effect.h => Base class for all effects, header

├── effect.cpp => Base class for all effects, code

├── colored.h => All one color

This project is released under a public License.

To contribute to this project please contact : john _at_ dillenburg.org 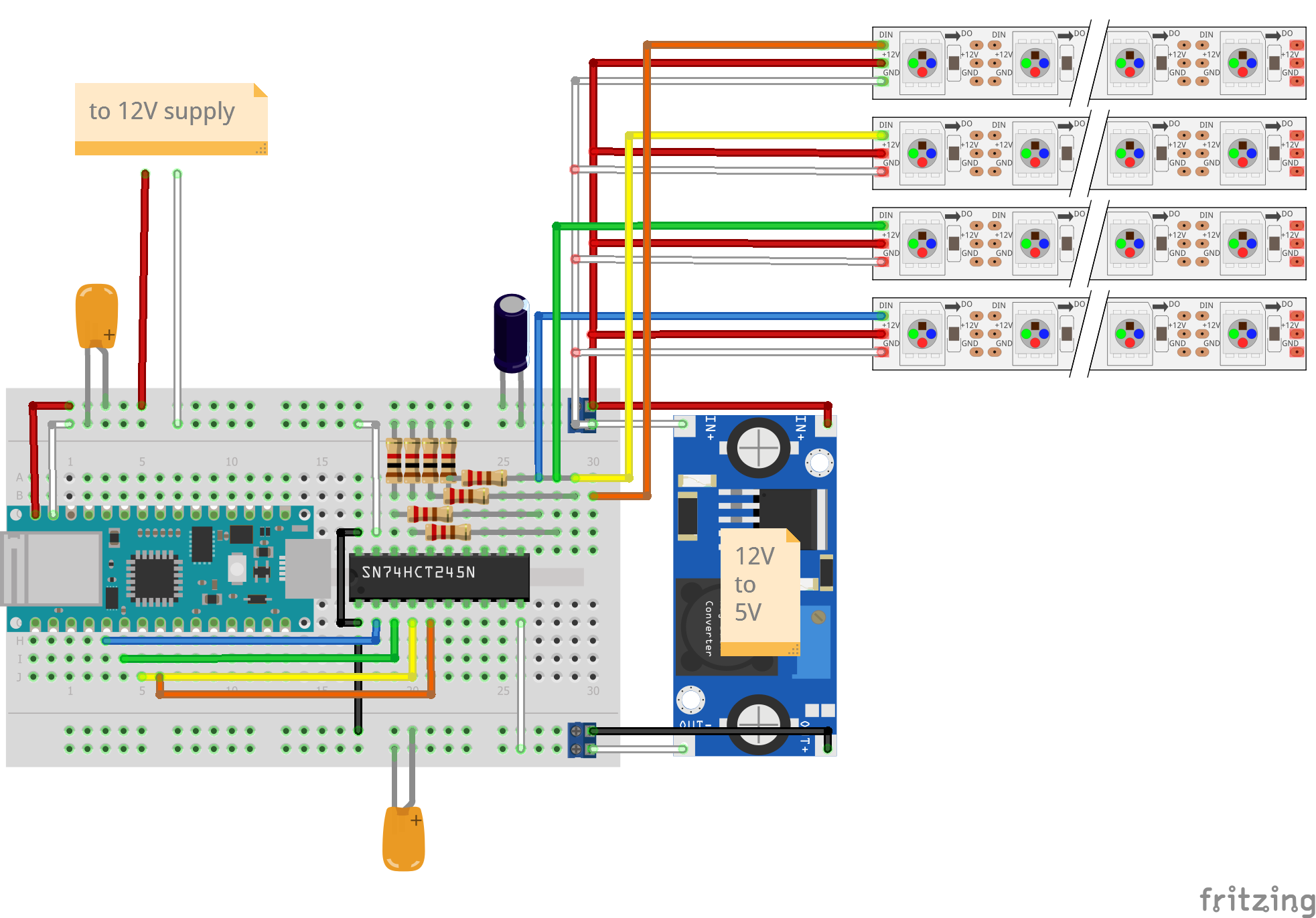