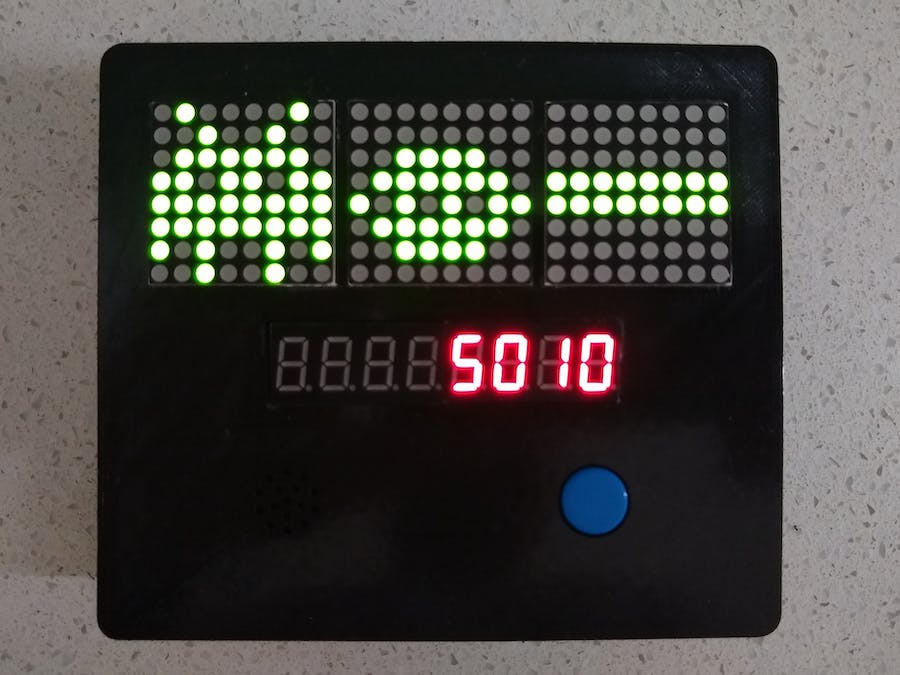 A while ago, I was looking at the Arduino Slot Machine by seawarrior181. It seemed a good project to modify and try to get it to run on an ATtiny85 microprocessor. I decided not to include the 4 line LCD display because the statistics wasn’t my primary goal. (It still calculates and stores all the statistics that seawarrior181’s version has, it just doesn’t display them). Also I did away with multiple buttons. It means that the players bet is fixed and is the same on every spin (much like a real slot machine).

To achieve this, the reel symbols have been moved to Flash memory, variables have been reduced to 8 bit where it was appropriate to do so and the code footprint reduced by more efficient coding.

I developed the software on an Ardunio UNO because at the time I started, it wasn’t certain that everything would fit into an ATtiny85.

The software has the following compiler constants:

If you are using a 4 x matrix board and a 8-digit 7-segment display, that means 5 MAX7219 ICs are daisy changed together. Set DIGITS to 5 in this case.

Although the payouts all assume three reels, the code to spin the wheels is designed for any number of wheels. The WHEELS constant tells the spin code how many wheels it should emulate.

The 8-digit 7-segment display can be wired between the Arduino and matrix displays or after the matrix displays. If it is the former, set the MONEY constant to 0 reflecting that it is on the first MAX7219 IC encountered.

Logically the software considers matrix 0 the left one, matrix 1 the middle one and matrix 2 the right one. If using a 4 x MAX7219 8x8 matrix board, you would redefine the DIGIT macro as:

The problem with using the Digispark system for programming ATtiny85 processors is that the Digispark boot loader uses a big chunk of Flash memory leaving only around 6800 bytes from the 8192 bytes. However, the boot-loader is there really only to support serial communication via the USB port. If this isn’t required, the boot-loader doesn’t even need to be there.

Use the following fuses

This will turn off the prescaler and enables the PLL so the chip can run at 16MHz.

In the Arduino IDE, add the following package in File-Preferences-Settings-Additional Board Manager URLs

Adding the additional boards to the Ardunio IDE

Now select the following from the Tools menu

Set the board and programmer options

Open the sketch and uncomment the #define ATtiny85 on line 9 and ensure #define DEBUG is commented out. Select Sketch-Upload using programmer to upload the sketch to the ATtiny85.

I designed a PCB to hold the components and 3D printed a suitable case. The ATtiny85 chip is mounted on the back of the board. I used a 8 pin DIL variant. The IC socket has its pins flattened out and soldered to the board like a SMD device. There is also a 5V SMD regulator.

After 3D printing the case, drill out the mount holes with a 2.5mm drill and create a thread with a 3mm tap. Use 6mm M3 screws to hold the board in place.

6mm M3 screws hold the board in place

The only issue I had with this build was the variation in some of the components. It seems not all the matrix modules and 8-digit 7-segment displays have the same pinouts or sizes.

If seawarrior181 got his formulas right and this is a true reflection of how payouts work in a real casino, I don’t know why anyone would want to play these machines.

You might lose a few hairs building it, but at least you won’t lose your shirt playing it 😁😃👍 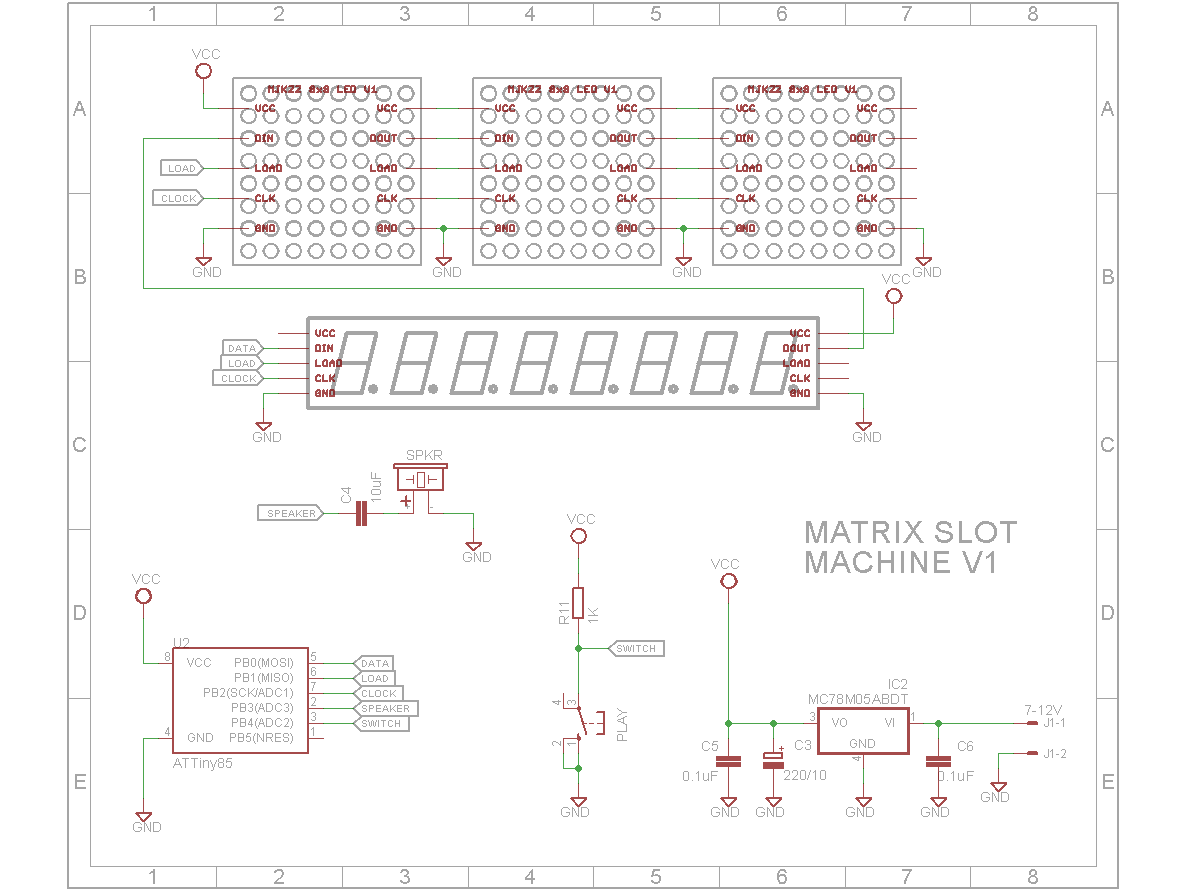 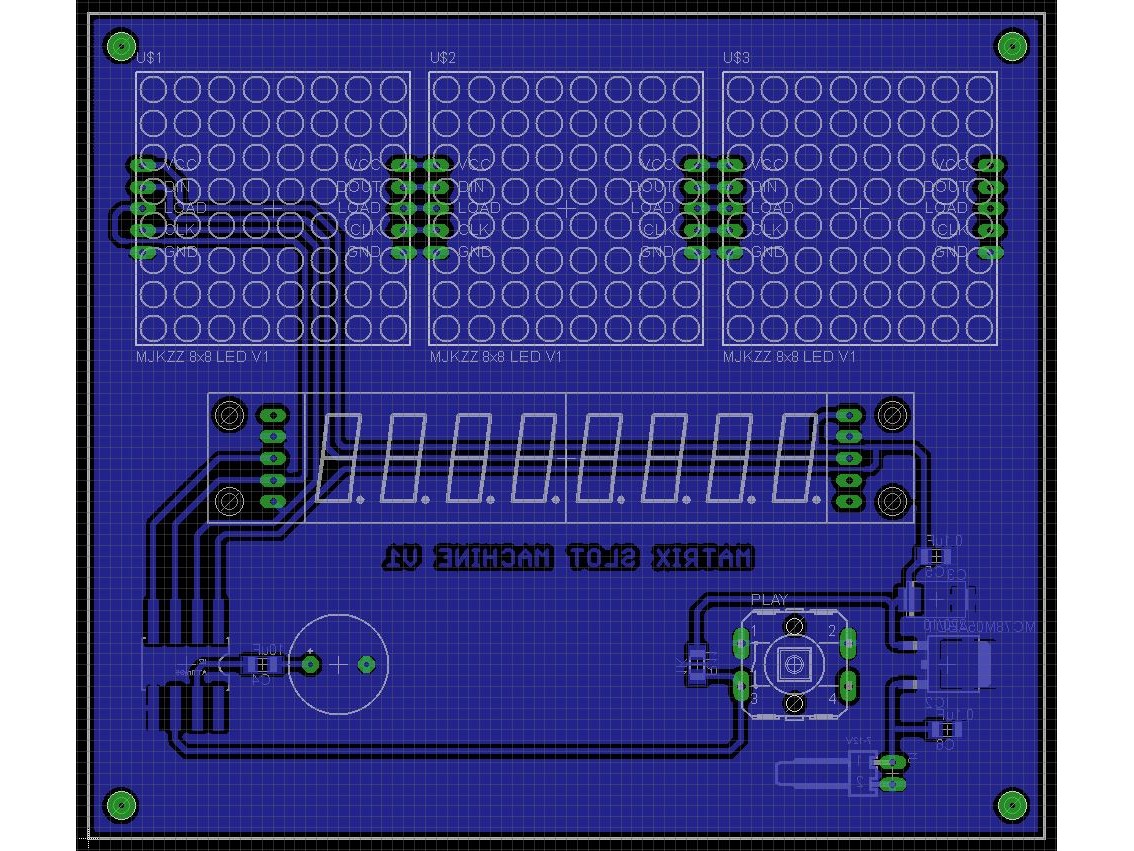 67 projects • 54 followers
ContactContact
Thanks to seawarrior181.