There are actually plenty of bicycle trackers around, so why make your own? Well, so that it works the way you want it… And it’s fun!

I was looking for a tracker that would let me know if the bike is moving and that will start tracking it through GPS if it’s stolen. I did not want it to work through bluetooth, because that requires proximity to the device and that enough users of the same tracker are around (never liked that concept). And I did not want to tie myself into using an app that likely will stop working if the company goes belly up. Most of the time, you’re also forced to use the SIM-card provided by the company that sells the device. Nah… I want to be in control of this thing.

So, I needed a microcontroller that I could hook an accelerometer and a GPS to, and that reliably could send me the data gathered from those sensors. A simple SMS seemed like the best way to transmit, and it’s unlikely to stop working in the near future.

This is my first ever Arduino project, but I'm quite happy with the way it turned out.

The device features include:

For more details on how the device works, visit the GitHub repository.

Here's a view of the prototype case mounted on a bicycle. Preferably I would have liked to somehow mount the tracker either in a slimmed-down 3D-printed case (but I don't have a 3D-printer) or directly under the saddle somehow. For the prototype this works great though.

Mounted on the bike (integrated into the lock holder to somewhat hide it).

And here's a view of the internals of the prototype.

The prototype all wired up.

The prototype case is weatherproofed with old bicycle tire tubes and a lot of rubber glue...

The next step in the project is to mount the tracker inside the bike's frame. 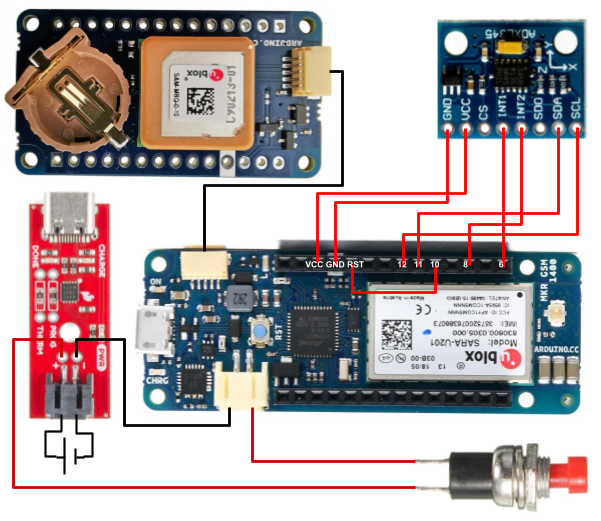