A LEGO EV3 printer robot that can receive commands from an Alexa device to print out your lists, create gift tags and draw pictures.

A LEGO EV3 printer robot that can receive commands from an Alexa device to print out your lists, create gift tags and draw pictures. 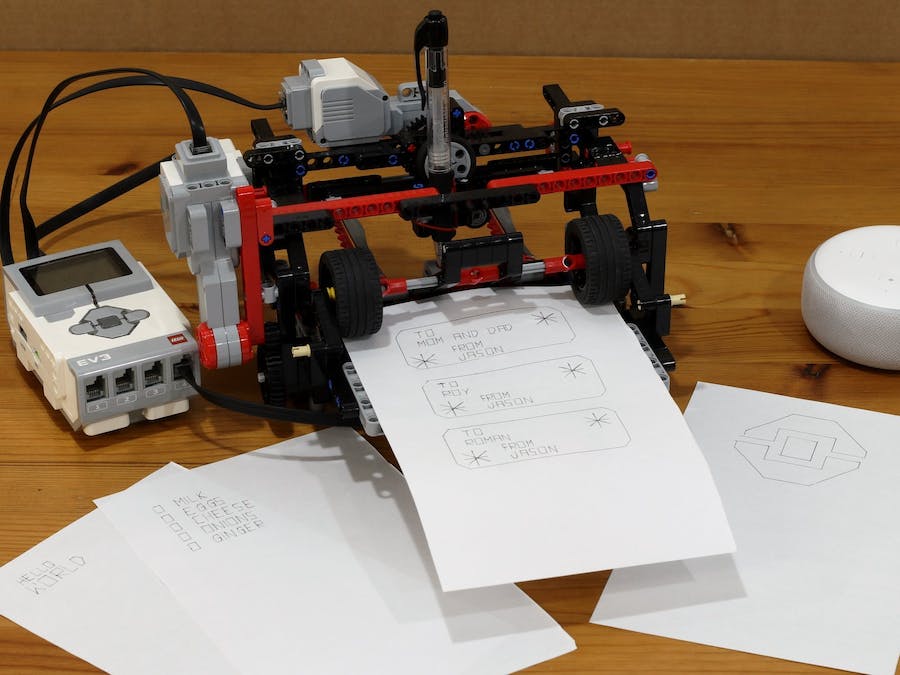 I designed a printer robot using the EV3 kit a couple of years ago, but it always had limited use due to the difficulty in sending information to it for printing.

When I discovered the possibility of an Alexa device being able to communicate with an EV3, I immediately wanted to explore the possibilities of using that communication to send data to the printer.

My main objective was to be able to print out the lists that I had stored on my Alexa device. My grocery list, todo list, etc. While I was at it, I expanded it to print gift tags to everyone on a specified list, draw the Mindstorms EV3 logo, and print out words dictated to Alexa. It can easily be expanded to print even more items.

You can see the printer in action in the demonstration video, and continue reading to learn how it works.

There are two main components to this project: the physical printer, built using the LEGO MINDSTORMS EV3 kit; and an Alexa powered device. On the coding side of things, there is a program that runs on the EV3 and an Alexa Skill that manages the voice interaction with the user. The EV3 can communicate with the Alexa device over Bluetooth to send data back and forth.

If you would like to recreate this project, I would highly recommend first going through the Setup Guide and the 4 Missions described on the LEGO MINDSTORMS Voice Challenge page - https://www.hackster.io/alexagadgets

These tutorials will go through all the details of setting up the development environment for your EV3 brick (python code running on ev3dev), writing an Alexa skill (Node.js code using the Alexa Skill Kit), and configuring your EV3 and Alexa skill to communicate with each other.

All of the code for this project can be found in the following github repository: https://github.com/jasonallemann/printbot

The printer can be built using the pieces that come in the LEGO Mindstorms EV3 kit (set 31313). The only thing you will need to add is a pen and paper, no additional LEGO pieces are required.

I have found that gel pens work best, as they glide very smoothly over the paper and don't require a lot of force to deposit ink.

For paper, I'm using sheets of 8.5x11 cut in half, but the tray is slightly larger than that, so it can accommodate A4 sheets cut in half as well.

I have attached a pdf file containing step by step building instructions to this project, but you can also find it, along with more information about the printer here: https://jkbrickworks.com/telegraph-machine-and-printer

Once the printer is built, you'll need to connect the motors and color sensor to the correct ports, as follows.

How the Printer Works

The printer uses three motors and a color sensor. The two large motors control the position of the pen on the page, the medium motor raises and lowers the pen during the print operations and the color sensor is used to detect when paper is in position for printing.

When the printer prints something, it issues a sequence of instructions to each of the motors in order to raise or lower the pen, move it from side to side or move the paper in and out.

For example, below is a code snippet illustrating how the letter A is printed. The pen module (imported as the alias p in this case) encapsulates the low level motor controls, and provides a friendly set of functions for manipulating the pen.

If we take a look a couple of these pen functions, we can see how they directly control the corresponding motors.

And here is how a rectangle with cut corners is printed.

The code for the printer is written in Python and runs on ev3dev, an open source operating system that can run on the MINDSTORMS EV3 brick. The code is comprised of several files, which you can find in printbotEV3 folder in the github repository.

The file printer.py is the main program to run for the printer bot. It derives a class from the AlexaGadget class, which implements the code for responding to and sending messages between the EV3 and the Alexa device.

Below is a code snippet showing how the EV3 will process the directive for printing a list. You can see that the data associated with each directive is passed as a JSON formatted payload.

The draw module code for printing a list item is as follows. It calls the text module to print the letter O followed by a space, which acts as a check box, then prints the text of the list. It finishes by moving the pen to the beginning of the page and perform a line feed.

The python files in the printBotEV3 folder contain all the code for operating the printer and drawing different items as follows.

The code for the skill is written in Node.js and can be found in the alexa-skill-nodejs folder in the github repository. This folder also contains the dialog model for the skill, in the file model.json.

These files can be copied into your skill once it has been created in the Alexa Developer Console. Again, it is recommended to go through the Setup Guide and Mission tutorials linked in the Getting Started section if you are unfamiliar with creating a skill.

The Alexa skill also contains a model for the dialog interaction with the user, which is described in JSON format. For example, here is the dialog definition for printing a list. It requires an utterance with the word list in it, as well as the name of the list.

Below is a code snippet showing how the directive for printing a list is constructed by the Alexa skill and sent to the EV3.

Once you have the printer.py program running on the EV3, you can launch the printer skill by saying "Alexa, open print bot". This invocation name is stored in the model.json file as shown below, so you can change it to whatever you want.

Once the skill is activated, Alexa will ask you what you would like to print, and all you have to do is tell her. In addition to the printing commands, there are commands for getting and setting the text size, calibrating the printer and performing diagnostics that can be issued. All of these commands are all outlined below.

The first thing you will probably want to do is calibrate the height of the pen, so that it prints correctly. This should be done whenever using the printer for the first time after inserting or adjusting the pen.

For best results in calibrating the printer, follow these steps.

The printer can print the items on any list you have on Alexa. Either the two built in lists (Shopping or To-Do) or any custom named list. Each item on the list is preceded with a check box.

This will print a gift tag for each name on a list from the specified sender. If you don't specify either of the required parameters, Alexa will prompt you for them.

You can print out a word by asking to print it.

This will have the printer draw the Mindstorms EV3 logo.

Examples:
"Set the text size to 6 millimeters."
"What is the current text size?"

You can ask Alexa to set and get the size of the text. The text size can be any value from 4 mm to 8 mm. The default value is 5 mm.

The text size, along with the dialog mode setting (see below), is stored in the file printerSettings.txt on the EV3, so it will be remembered across printing sessions.

These commands will put the printer into and out of dialog mode. When in dialog mode, you can issue commands to the printer to test the dialog interaction. Alexa will respond appropriately to each command as if the printer was operating normally, it just won't actually print anything. This is useful for testing your dialog logic and slot validation.