A Raspberry Pi 4 as NAS server with two WD red 4TB out of an old 19" power amplifier case. (Hard- and software.)

Raspberry Pi 4 NAS Out of an Old Power Amplifier

Raspberry Pi 4 NAS Out of an Old Power Amplifier

A Raspberry Pi 4 as NAS server with two WD red 4TB out of an old 19" power amplifier case. (Hard- and software.) 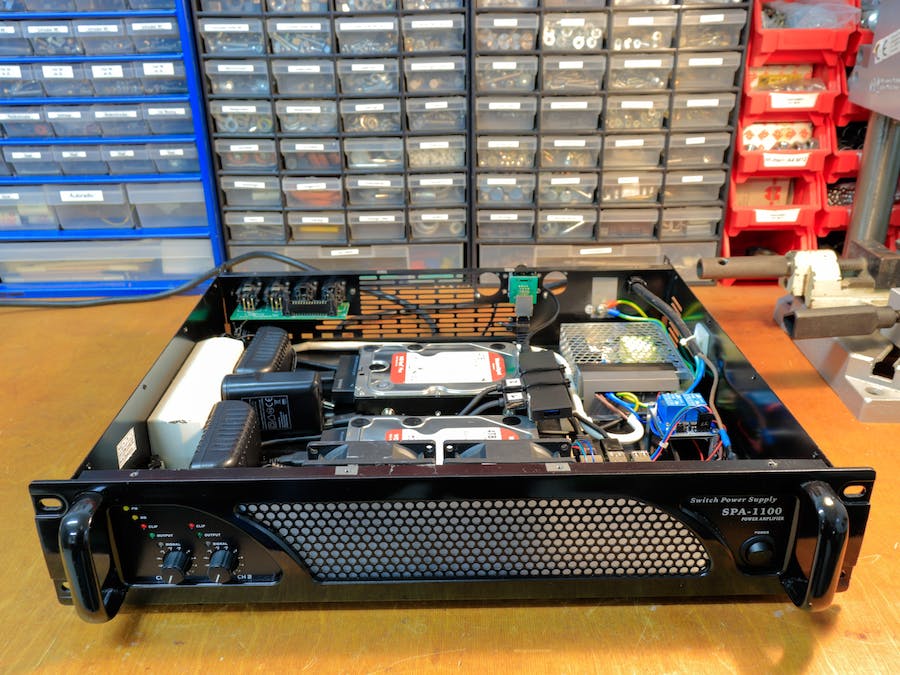 I had played around with the NAS feature of my router in the past, but quickly reached its limits. Since then, I was looking for a NAS solution for my whole family. Best to build it myself. I already had a few Raspberry Pis at home and when the PI 4B came out, this was the perfect moment to get this project started.

Around the same time, a power amp at my school broke. Since I am involved in sound engineering there, it was no problem to get hold of it. So, I had a case in which all components would fit.

This project is divided into two parts:

In part 1 we take care of the hardware, i.e. the cabling of the individual devices and especially also the installation in the power amp case.

In part 2 we will install the operating system and set up the NAS.

If you are only interested in the software part and setting up the NAS with Ubuntu Server, you can jump straight to the second part.

The complete project and associated code can be found on GitHub (https://github.com/JJandke/RaspberryPiNas).

Note: For a pure Raspberry Pi 4 NAS without amp case, we only need those articles in bold.

Part 1 - The enclosure (not important for the NAS itself)

After opening the 19" case, and removing the actual PCB, I was also able to unscrew the front panel and get access to the fans. Of course, these had to be cleaned first. I decided to further disassemble the front panel and spray paint it completely black. In order for the paint to hold better, I had to sand it down a bit.

Then I had to think about the actual allocation of the devices in the case. This was only possible to a limited extent before, because I didn’t have any specifications of the power supplies for the USB-SATA adapters. I had originally wanted to take a black multi-socket, but the plugs there were arranged at an 45° angle, so that the power supplies would then have been too high and would no longer have fit into the housing. Therefore, I had to search for a multi-socket with straight plugs.

Now that I knew what should go where, I could start attaching the parts. The Ethernet feed through I could simply attach to the place of a previous speakOn port, for this I only had to drill two holes for the screws. For the relay, the 24 V power supply and the Raspberry Pi, I marked the holes and punched them so I could drill them with a 2.5 and 3mm drill bit. I was able to immediately screw the 24V power supply to the bottom of the case. But since the relay module was not insulated at the bottom side of the PCB, I had to mount it on spacers and attach a small plastic sheet.

I had long been wondering how I would mount the Raspberry Pi. In the end the best solution was to mark the four holes of the base plate with a scriber on the bottom of the amp and then screw the Raspberry Pi case to the power amp case with longer screws. Since the fans were clean again in the meantime, I could screw them into the case as well.

I decided to use the screw terminals on the 24V power supply to be able to connect the multisocket there. So I had to remove the plug, and strip the three stranded wires. I crimped ferrules onto the stripped ends and then screwed them (L2, N2, PE2) to the AC input side of the terminal block on the 24V power supply.

After an isolation test, I was able to plug it in for the first test. Fortunately, nothing blew up in my face, nothing exploded, and everything behaved as it should... except the switch… Wiring this power switch was a bit difficult, as it had an LED that was supposed to indicate if the switch was set to on or off... but it was not quite clear in which positions what happened. So it took me a few tries before I knew the correct wiring, as the manufacturer did not include instructions.

Now that the AC part is done, I'll take care of the DC part.

This seems complicated because there are many cables, but it is relatively simple.

At this point it is important to add that it turned out later that you need an additional active USB hub between the Raspberry Pi and the active SATA USB adapters. When setting up the NAS, I struggled almost continuously with one of the disks being kicked out. sudo dmesg always returned errors that looked like this: over current change #54. There were other errors, but they were software related. After weeks of trying and researching I found someone with the same problem. His hard drives were also thrown out, although he also used active SATA USB adapters. Indeed. With an active USB hub I didn't get these error messages anymore. Interesting to know is that the active USB hub drew only 0.2A(DC) in IDLE and almost 1A(DC) in use. From this I conclude that the active adapters could not supply enough current. Now that the Raspberry Pi has been expanded with more USB3 ports, I'm also thinking of moving the operating system to an SSD, as these are more durable than SD cards.

Of course, good cable management is important, so that cables do not unplug themselves and that it is easier to upgrade later.

To stop dust that would be sucked in by the fans, I sandwiched a strip of filter floss for servers between the chassis and the fans.

After flashing the Micro SD card (See Part 2) I was able to insert it into the Raspberry Pi and then attach the black painted front panel as well as the lid.

About switching the fans: Since the fans do not support PWM out of the box, it would be an idea to control the fans with MosFets instead of just a relay, to control their speed proportional to the temperature.

Now we continue in part 2, since we have already done everything that has to do with hardware.

Get the IP of the Raspberry

First steps on a new OS

Note: Since the NAS will only be accessible from the home network anyway, this is not absolutely necessary. This measure helps to make attacks on port 22 useless, but with a portscan you can also find out the actually used port. Therefore, a strong password is more important for every user. More help would be provided by fail2ban and access via certificate.

Allow selected port in the firewall

Since we changed the default port of SSH, sudo ufw allow OpenSSH won't work anymore. Therefore, we need to use the following command to allow the newly selected port:

Since I have installed several Ubuntu servers and want to recognize my NAS better in the home network afterwards, the hostname will be changed. Note: After that the RPi is no longer reachable via ssh under ssh ubuntu@ubuntu -p 2846 but under ssh ubuntu@rpi-nas -p 2846.

The last thing we do is to add a default, non-root user, which we will work with from now on.

Python scripts to cool the NAS

Now it finally comes to create the raid using mdadm.

Of course must be repeated for the second drive (sdb).

Here you can also see if a hard disk is failed or synchronized.

In the beginning, I often had problems with my hard drives being kicked out. On the one hand, this was due to the lack of a USB hub, but on the other hand, it was also due to UAS. That is why we will block it. In addition, we deactivate the sleep mode of the hard drives, so that they do not switch off at some point and are then no longer accessible.

Create folders for the users

Note at this point: Whoever has the ubuntu or config passwords also has access to all files stored on the entire NAS.

Now the NAS is completely set up and working.

It can now be mounted under Windows or Linux

Keep in mind, however, that a Raid1 storage is not a fully permanent backup solution and that regular backups must be made to different locations. 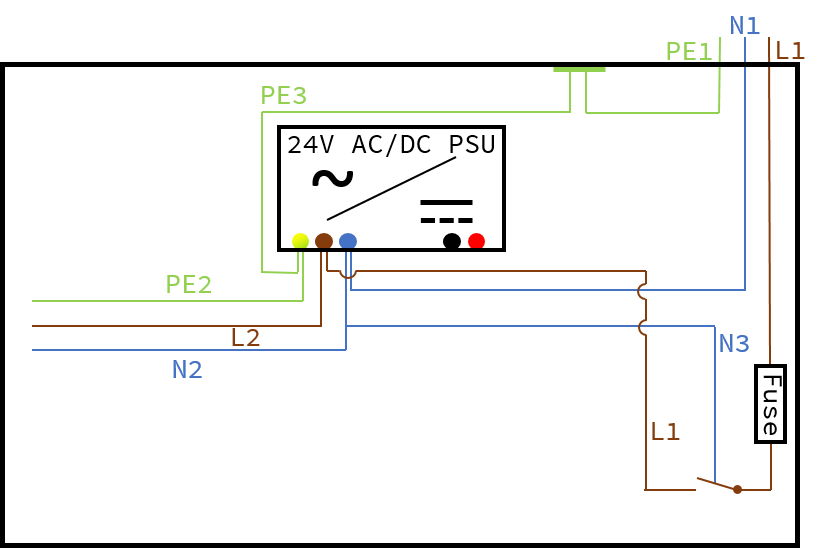 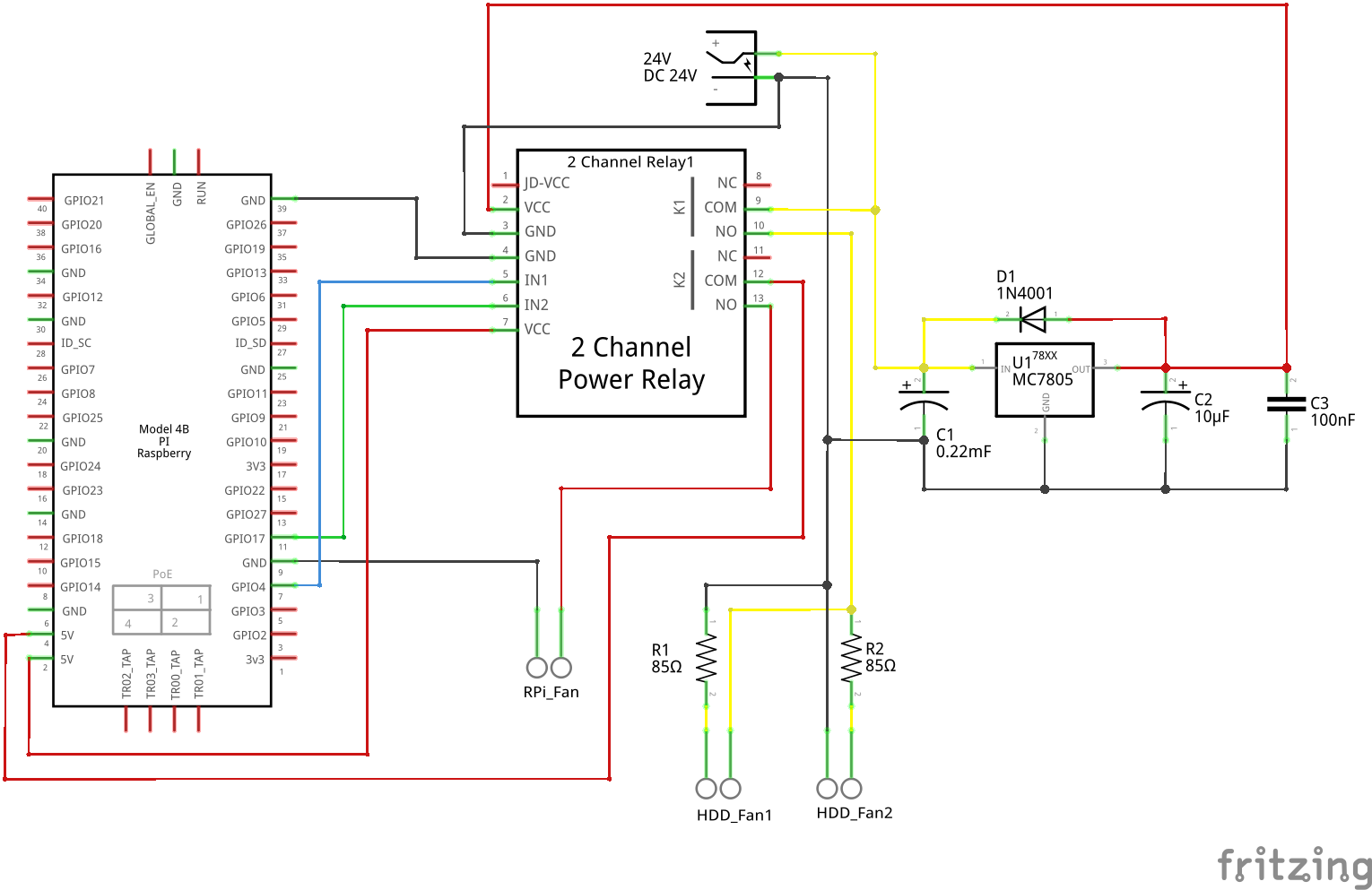