Use Qeexo's AutoML to monitor the motor's status on a Fischertechnik robot.

Use Qeexo's AutoML to monitor the motor's status on a Fischertechnik robot. 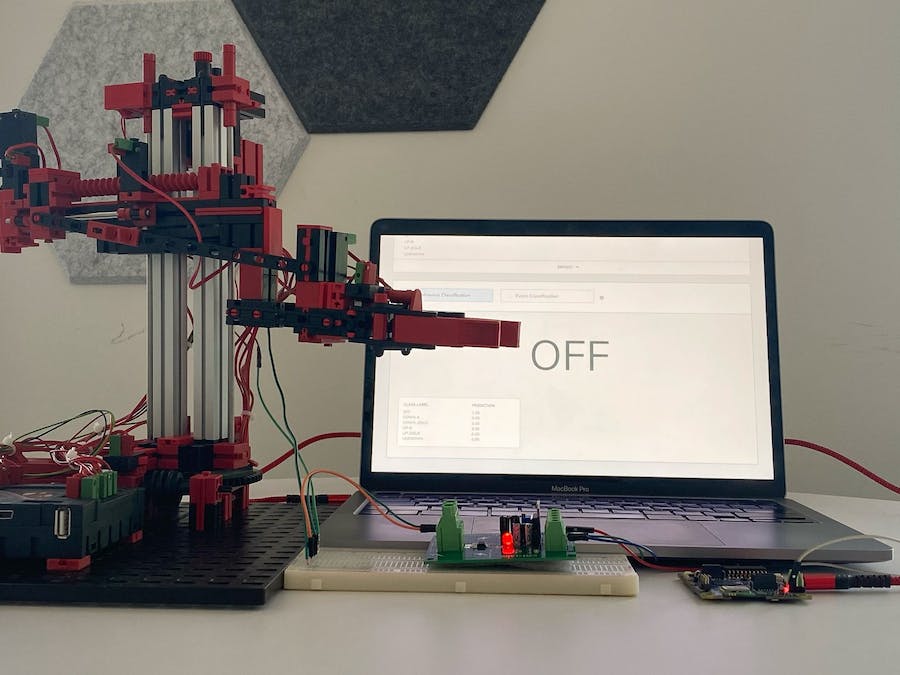 After experimenting with the Fischertechnik's encoder motor and finding out that the motor's electrical current changes when external torque is exerted on the motor in rotation, I have decided to use Qeexo's AutoML program to make a machine learning model that classifies the motor's state and detects for any issues on the running motor on the robot arm.

Step One: Building the Fischertechnik robot

Using Fischertecnik's 519341 Stem Engineering set, a four-motor robot arm was built. While this project uses this particular robot arm model, virtually any other robot model that uses a motor and has ML needs can be used to create a similar project.

In the initial version of the project, SparkFun's INA169 current sensor module was used to measure and collect the current data from the running motor.

VIN+ --- connect directly from the motor

VIN- --- connect to the controller

**Note: In the Bonus section, I have included a more developed, complex second version of this project. There, I have used the CZH-LABS D-1020 sensor module which records the current data as it flows in both directions.

Now that the hardware setup is done, the data collection process needs to be started. In my prior ML model, I used the multi-classclassification and collected the data for three different classes: normal (when the motor rotates at a constant maximum speed), off (when the motor is turned off), and issue (when a stick is used to cause interference on the gears connected to the motor). However, I have realized that collecting the "issue" dataset and using it in the model training process is unideal. Why? in real-world applications, who would want to break the motor just to collect some issue dataset?

So, I have decided to use the multi-class anomaly classification type to train a machine learning model. Here, I only collected the training data set for the normal and off status.

After successfully collecting the training data, I trained machine learning models on all five supported algorithms.

All five algorithms had the same 0.93 accuracy on cross validation, and similar latency. However, GBM (Gradient Boosting Machine) turned out to be the best working algorithm on live testing, while also having a small memory size.

gear interference state ("unknown" anomaly state); This is a gif. May take some time to show up :<

Check out the video below

In addition to the prior model above, I have created a more complex version of this project. Using CZH-LABS D-1020 current sensor, I made a classifier that differentiates between:

A mere teenager toy was used in this project, so this developed ML model will not be able to be applied directly in any industrial setting. Nevertheless, there is a notable takeaway: the motor's electrical current changes when there is an issue in the motor itself or one of the connected gear components. The change in the current data was sufficient enough that the model was able to be trained and tested to a reliable accuracy. Hence, this idea of using a current sensor to detect motor anomalies through ML model may be used in many practical instances such as in automated factories, apartment water pumps, elevators, etc...