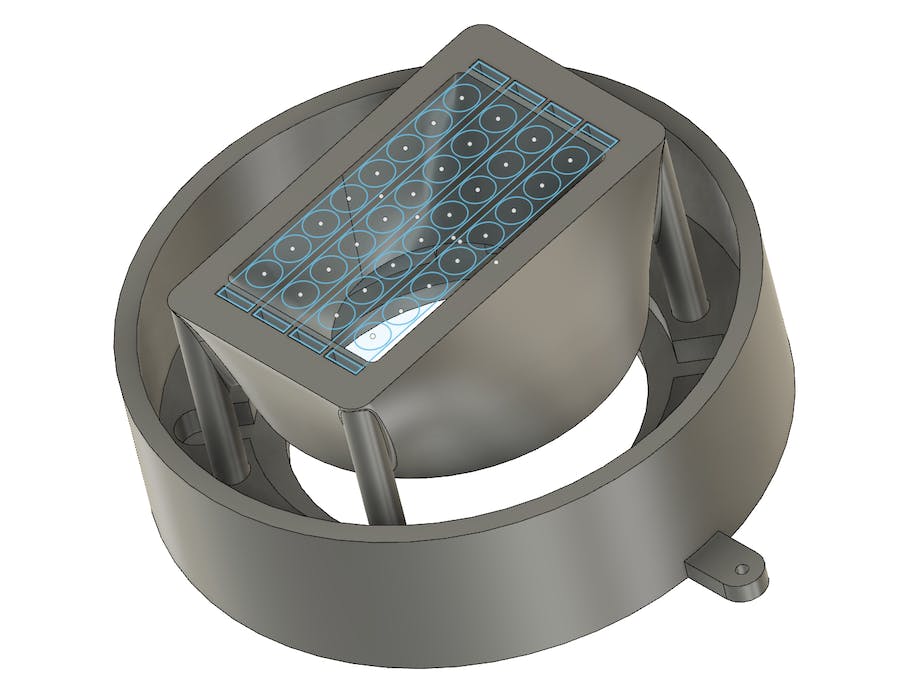 This project explores alternate designs for a micro reactor motivated by experiments with the Mk I AirLoop device (https://www.hackster.io/jim-haseloff/airloop-i-5d2a72). This simple device incorporated a 3D printed housing acted to absorb and radiate heat - giving a ceiling of ~80 degrees C with the 120 degree PTC heater that I was using. There were also signs of uneven heating.So, I wanted to explore smoother pathways for air flow, and to look at better insulation. This partly motivated by the potential benefits of being able to reach and maintain temperatures of 95 degrees for relatively short periods - say 1 to 10 minutes maximum.To keep things cheap - I was looking to repurpose exisiting materials and devices. The 200µL 8-tube strips have a long dimension of ~80mm, and I was looking at insulated vessels that might be useful as casings - together with 3D printed adapters. I bought a double-walled vacuum insulated container via Amazon, that looks worth exploring. It is 130x130x130mm, and has a wide mouth, about 118mm in diameter. In the real world, it is container for carrying your lunch, and costs just over £12.

For this to be useful, the heating system and sample holder need to fit inside. There are a couple of ways that temperature and air circulation could be set up. I'm looking at locating the heating element at the base, and setting up a toroidal air flow, with higher velocity the better, and placing the samples at the top of the vessel.In a perfect world, the system would provide a base for a series of incubators capable of:(i) 30, 37, 42, 60 deg constant temperature for standard reactions(ii) Constant temperature plus 95 deg up to 10 minute pulse for sample treatment.(iii) ~50-to-70-to-95 deg cycling for PCR reactions.(iv) ~16-to-37 deg cycling for Type IIS DNA assembly reactions. The latter two require cooling, with use of a TEC Peltier device, and/or venting and colling with ambient air flows.In order to build a device that will comfortably maintain temperatures of 95 deg, the air circulation needs to be maintained by a heat resistant fan. Most standard computer fans are rated to 60-70 deg - but can tolerate higher. There are also some heavy duty (fibreglass) fans that can operate to over 100 deg. I'm thinking of two alternative designs - the first is based on the use of a 60mm axial fan, positioned to blow air from top to bottom of the vessel, through a central channel (like the hole in a donut) - to set up a toroidal air flow. The second design is to use radial flow of air from the base of the vessel, starting from the heating/cooling element. Recent investigations have provided a few new ideas to explore for this.Positioning a conventional fan over a heating element will work fine up to 70 deg or so - but the fan could be prone to failure as the temperature approaches 100 deg. (The heating element will usually be at a higher temperature than the set point for the sample). Around 2012, a team at Sandia National Labs was investigating the prospect of more efficient air cooling using kinetic heatsinks. The early prototypes consisted of a metal rotor spinning over the top of a closely positioned flat stator plate - which resulted in theoretically more efficient heat exchange. The spinning rotor generates an underpinning cushion that acts as a air bearing. The centrifugal force exerted on the fins of the 2000 rpm rotor cause something like 10-fold thinning of boundary layers, and result in more efficient heat transfer. There are more details in the following Youtube video: https://youtu.be/JWQZNXEKkaUHI

There have been a few attempts to convert the idea into commercial products for CPU cooling. The only versions that are available at the moment are the Thermaltake Engine 17 and 27, which have different heights. The cost about £45 and £50, respectively. The main advertised benefits are small size, all metal combined heatsink-fan design, and efficient heat transfer to air. So these look interesting as new devices to test for the radial air incubator! (underway).

There is some more information about the commercial product at: https://youtu.be/oCghRn2Zae4 (There main virtue as a CPU cooler seems to be compact size, but the all metal construction and extent of heatsink-to-air contact might be benefits for the design of incubators). Specifications at:https://uk.thermaltake.com/engine-17.html

Designs for 3D printed incubator chambersI've been iterating a few designs for housing the Thermaltake Engine 27 and 8-strip 200µL sample tubes - incorporating a system for recirculating air flow and double-insulated stainless steel chamber walls - using a cylindrical vacuum container. This is getting a bit more costly than previous designs (Thermaltake Engine 27, £50 and vacuum container, £12 + heating/cooling circuitry) but should be capable of higher performance.

Mk II air guide and carrier for 8-tube racksA couple of images of the revised air guide - with greater lateral clearance and tight return to kinetic heatsink. Air is moved radially from the rotating heat sink, moves up the side to the top of the insulated vessel, and is then drawn back through the central fan - to recirculate through the vessel. Sample tubes (8-tube sramestrips) are suspended in the air flow.

I've wired and powered up the radial flow incubator - with encoraging results. A 120 degree PTC heater is glued with thermal adhesive to the base of a Thermaltake Engine 27 kinetic heatsink, along with a DS18B20 temperature sensor. Other DS18B20 sensors were placed (i) in the incubator chamber, adjacent to the sample holder on the internal manifold, and (ii) outside the chamber, to measure ambient temperature. The heater and Engine 27 were powered at 12V via MOS-FET switiching devices - under Arduino control, provided by XOD software running on my standard test-rig (https://www.hackster.io/jim-haseloff/programmable-test-rig-d7df62).

The kinetic heatsink drives a strong air flow within the chamber, and there appears to be an efficient heat transfer from PTC heater into the chamber. The temperature of the heater and air at the sample position were maintained quite closely - about 4 degrees apart when the sample was maintained at 60 degrees. These drifted apart quickly if the fan was turned off. Using either crude "bang-bang" or PID control routines, the incubator could maintain a 60 degree temperature in a very steady fashion for hours.

The use of the vacuum insulated stainless steel jacket for the incubator dramatically reduced heat loss. The external suface of the jacket remained below 30 degrees even after running the incubator at 60 degrees for several hours. However the 3D printed plastic base was noticeably warmer, by about 10 degrees.

Infrared view of reactor in operation at 60 degrees

Showing a trace of temperature readouts when the incubator was started, showing heating to 60 degrees, with a PID controller. The thermal mass of the kinetic heatsink and the stainless steel vacuum-insulated container contribute to a relatively slow rate of heating. It takes 10-15 minutes for this incubator to reach 60 degrees from ambient temperature. The temperature control is steady and the incubator holds temperature accurately - and can hold this for a period of hours.

47 projects • 36 followers
Synthetic Biologist/Professor at the University of Cambridge, organiser for OpenPlant, Biomaker and the SynBio IRC
ContactContact