The Raspberry Pi drives the focus stacking rail to achieve tiny micron movements of the camera towards the photographic subject.

The Raspberry Pi drives the focus stacking rail to achieve tiny micron movements of the camera towards the photographic subject. 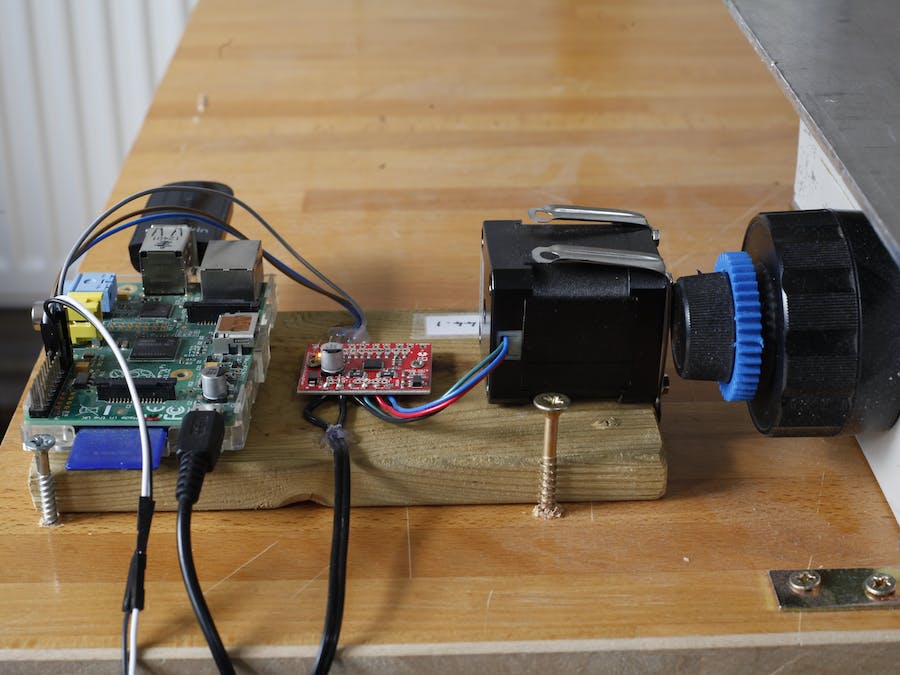 This project is a sub-section of my larger project on focus stacking of fern gametophytes.

This section explains what hardware is required for a Raspberry Pi-driven system, and how it is all wired up. We are only covering the electronics here and the other hardware is discussed in the main page.

Wiring setup on the Raspberru Pi

The exact positions of the jumper wires on the GPIO pins of the Raspberry Pi is shown here.

The stepper motor shield is shown in this image:

The jumper wires go to the GPIO pins as shown below.

The exact positions of the jumper wires on the GPIO pins of the Raspberry Pi is shown again here.

The stepper motor has four wires which are all unlabelled. It took us some work to figure out which was which, so that we could connect them to the right places. Our four wires are blue, green, red and black. They are connected to the pairs of holes labelled "A" and "B" at the bottom centre of the shield as seen in the photo above.

The photo below shows the position of the remote control in the setup.

The two images below show how the infra red camera trigger is wired up. Tim had to take the case right off and then he soldered on wires, and firmly connected them using a hot glue gun.

The wiring is shown below.

Below is the python program that I run on the Raspberry Pi to drive the rail. I do not have a screen attached to the Raspberry Pi, so I plug in a wireless dongle and then drive it from my laptop. I log into the raspberry pi using putty and then run the scripts from there. The scripts can be modified in between runs, so that if I feel that the movement of the microscope block needs to be a bigger step or a smaller step then I can quickly alter the distance in the programme. I can also alter the timing. For example I can have 1 micron steps with a 3 second gap in between to make sure that there is time for vibration to stop, or I can have a 5 micron step for a larger subject and 1 second gap if there is a risk that the subject will dry out and change shape during the series.

16 projects • 13 followers
I am working on deep focus photography of specimens from 0.5mm to 2.5mm tall. I would be interested in receiving commissions.
ContactContact