Watch time trickle away by using food colouring to print digits on a surface of a flowing river.

Watch time trickle away by using food colouring to print digits on a surface of a flowing river. 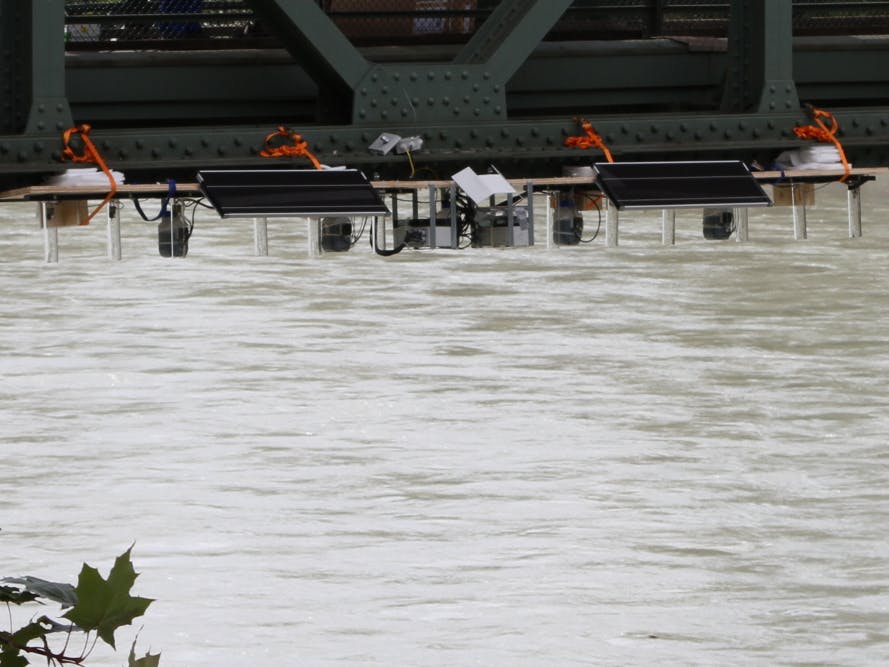 Where it took place: The “Karwendelbrücke“ is a bridge a bit offside from the center of Innsbruck.

Zeitfluss - Time is Trickling Away

The printing process as seen above

The video above is showing parts of the printing process and the resulting time on the surface of the river. Below a time lapse video of the last 20 minutes the installation was running.

The elements for printing onto a river

The digits are printed in a 7x5 pixel resolution. For every vertical row of a digit there is one micro piezo pump that generates the drops. Therefore the pump controller gets switched on and off depending on how long it takes the pump to produce a drop. In fact the water surface is used like a sheet of paper in an inkjet printer: One vertical line of drops gets printed - the water flows further - another line gets printed; and the numbers occur.

As seen on Hack A Day

See this project featured on Hack A Day.

Reasoning about time by printing onto the surface of a river

Maybe you know situations when time's running up. In German there is a metaphor for that and translated it would be something like "time trickles away“. Having this saying in mind and thinking of how to 'imagine' time the following idea turned up:

I would like to generate a situation, where people are able to let time pass by without getting into a hurry. Therefore the digits of time get printed onto the surface of a river with food colouring, so time could be observed from a bridge in peace, while it trickles away.
This idea got realized September 2013 in Innsbruck, Tyrol.

How it all works

The core element is an Arduino. It receives the current time trought a Real Time Clock Module. The micro controller maps the numbers of the time onto the available 5x7 pixel grid per digit. The resulting vertical lines of drops get printed one after the other by switching the shift registers and thereby the pumps. The Arduino code and the wiring diagram were done by Albert Frisch and could be found on the projects site on GitHub.
For logging what's going on, a RaspberryPi receives status messages from the Arduino. Once in a while - on an average every 20min - fswebcam gets called and takes webcam images as fast as it can for about 40 seconds. Afterwards the images plus log files get uploaded to a Server with fixed domain via a GSM-connection. All the input and output gets processed through a node.js Server; hence it is possible to serve a website on the Raspberry Pi as interface (with usage of websockets) for the installation that could be accessed via Ethernet and a modern browser on the footbridge.

In the video above

The test set-ups: LEDs were used instead of the piezo pumps to simulate the printing of all four numbers in one row (e.g. 02:01); and the pumps on a dry run.