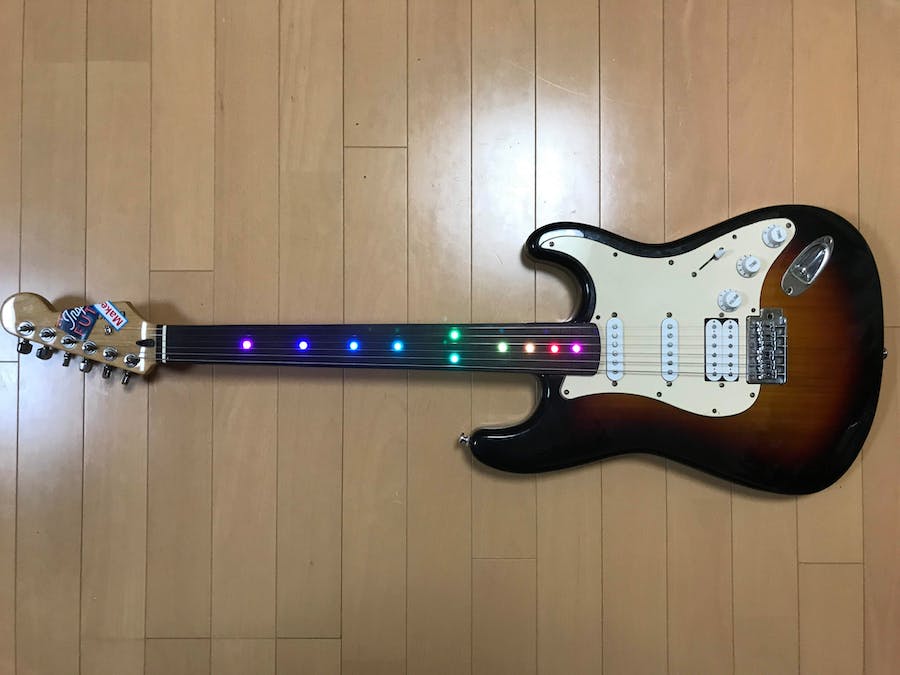 This project is hack the normal guitar to the NeoPixel LED controlling. Particle Argon in back side of pick guard control the NeoPIxel LED. You could control the LED color pattern when your play the guitar with MPU 6050 6-axis sensor in guitar.

And I want to make&play the fretless guitar, so this guitar don't have a frets. Fretless guitar sound is very unique and interesting.

First of all, let's tear down the guitar. I use stratocaster type guitar (I got a this second hard guitar about $25).

I really want to play the fretless guitar, then I removed the all fret from guitar by using pliers. When this process, it's careful not to damage to the fingerboard.

3. Set an LED to position marker on fingerboard

Next step make a position marker hole to fingerboard with drill.

The wiring of the NeoPixel LED passes through the neck truss rod groove, but 12 fret position marker don't have a groove. Then make the groove vertically on 12 fret position for LED wiring.

Finally set the neopixel LED to position marker hole and wiring with powerful double-sided tape. It's good fo put insulation tape on truss rod. Neopixel LED will be crimped by fingerboard and neck.

Before crimp the fingerboard and neck, make a position marker by using Acrylic rod(5mm). And test a neo pixel LED light.

All LED works fine, crimp the fingerboard and neck with Titebond. Leave it for 24 hours.

After paint the epoxy resin, leave it for 24 hours and brush the fingerboard with sandpaper. Here is neopixel LED output wiring from neck.

Make the hole with drill to the guitar body for neopixel LED wiring.

I use Particle Argon&LiPo battery for neopixel LED control. Don’t you think it’s interesting the guitar will be MESH Thread(IPv6/Bluetooth) gateway? Then I made the place with chisel on guitar body for Particle Argon. And paint the epoxy resin to the that place.

Set the Particle Argon and MPU-6050 on the guitar body. Argon LiPo power line passes through to the spring cavity unit by using ground connection hole from volume knob.

LiPo battery is set with sticky back fastener on the guitar body. If it need to change the LiPo battery, it' easy to replace.