This post describes how two calliope minis can be used to create a wireless messenger using the built-in radio.

This post describes how two calliope minis can be used to create a wireless messenger using the built-in radio. 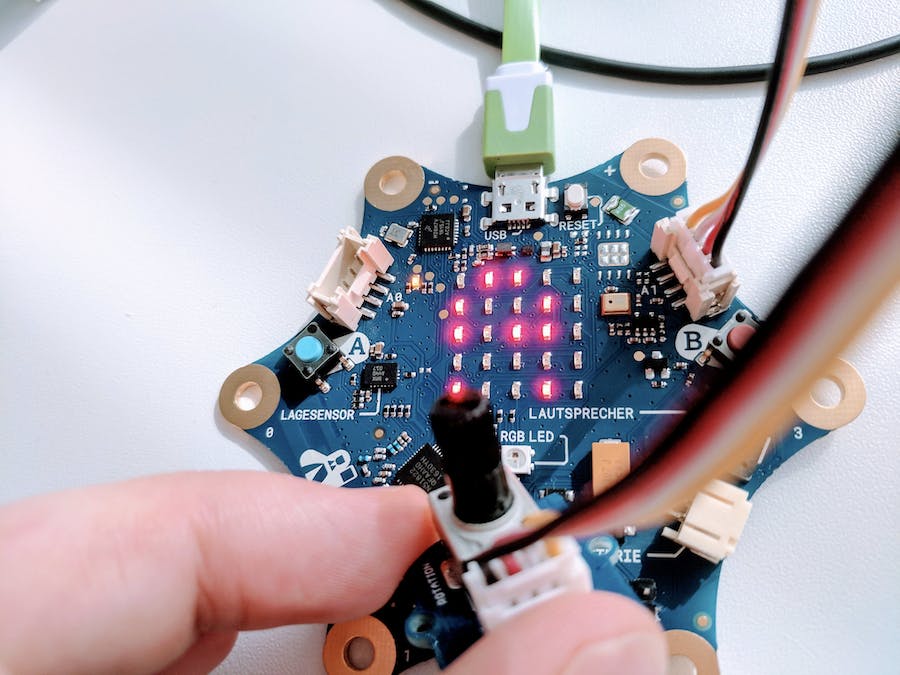 This project was created for the SAP Hybris Steam Kids program, a program dedicated to encourage digital literacy and to promote coding skills at school. We have chosen to use the Calliope Mini and provide a step-by step guide which is suitable for classroom use.

Using two calliopes and one potentiometer, you can easily create your own little messenger. Of course it will require both calliope mini to be somewhat close to each other so the radios can transmit and receive, but it easily work over a few meters and definitely within the classroom. There are many ways to extend and change this project, so feel free to drop me a line via twitter (@hansamann) in case you do.

A short video how this works in the end can be seen here.

This project requires two calliope minis - one sender and one receiver. The sender will additionally require a potentiometer that attaches to the analog grove port (the right one) of the calliope mini. Using the potentiometer, you will be able to choose the characters out of the alphabet to add to your message.

Part 1 - choosing a character via the potentiometer

We first will explore the potentiometer, which is a variable resistor with a knob to change the resistance. The calliope can read the changing input voltage at the grove pins and map it to a value between 0 and 1023. In the example below, the poti variable will hold the current reading of Pin C16, which is a Pin at the right grove connector. You cannot connect the potentiometer to the left grove connector, as this connector can only do digital communication while the right one supports analog input.

Turn the knob of the potentiometer to show a character out of our 26 digit alphabet.

Next, we make the experience of turning the knob and selecting a character a bit more exciting. Adding some sound will improve the experience. To know if the user has rotated the potentiometer far enough to change the current character, we must store the last character's position to compare it.

We add sound to make the experience of turning the knob more exciting.

We begin with adding an 'on start' block and initializing the position to 0. In the forever block, we now check if the position that we just calculated has changed from the last position. If there is a change, we play a very quick sound. We now need to update the last position so we can compare it again in the next iteration.

Part 3 - concatenating characters to a piece of text

At this point we can select characters, but we still cannot build a message. For this, we first create a text variable that we can add our characters to. When button A is pressed, we add the currently chosen character (buchstabe, ups, German). B will show the text at this point, later we will send the text on via radio. A shake will clear our text for the next transmission.

Note that we cannot only add numbers to other numbers. We can add characters to variables holding text. The characters will be added to the end of the text variable (called string).

We now store the characters by adding them to the text variable.

Now we just need to send our mesage. Especially if you work in teams and have different computers, it is very important to set the same radio group. The editor will otherwise choose a random group and the two calliope minis can later not communicate.

For sending the message, we just need to modify the blocks in the 'on button A pressen' block a bit. We first send the message (this is very fast) and then show the message like before on the screen.

The reveiving calliope mini is very simple. It needs to be set to the same radio group and then simply displays the messages received. 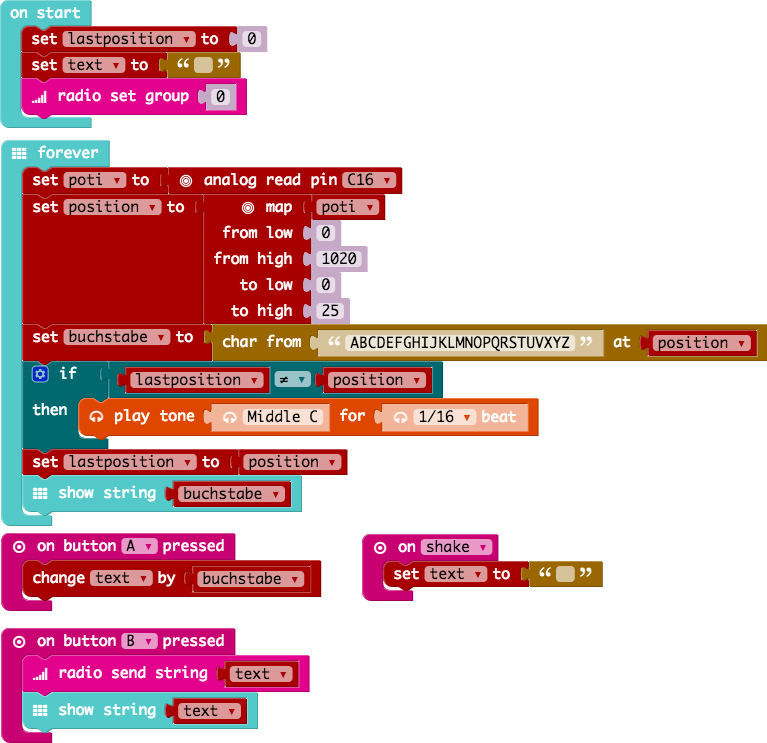