The device displays animated GIF pictures on a rotating cylinder. The GIF pictures can be downloaded from a PC via Bluetooth.

POV Cylinder with Arduino Due

POV Cylinder with Arduino Due

The device displays animated GIF pictures on a rotating cylinder. The GIF pictures can be downloaded from a PC via Bluetooth. 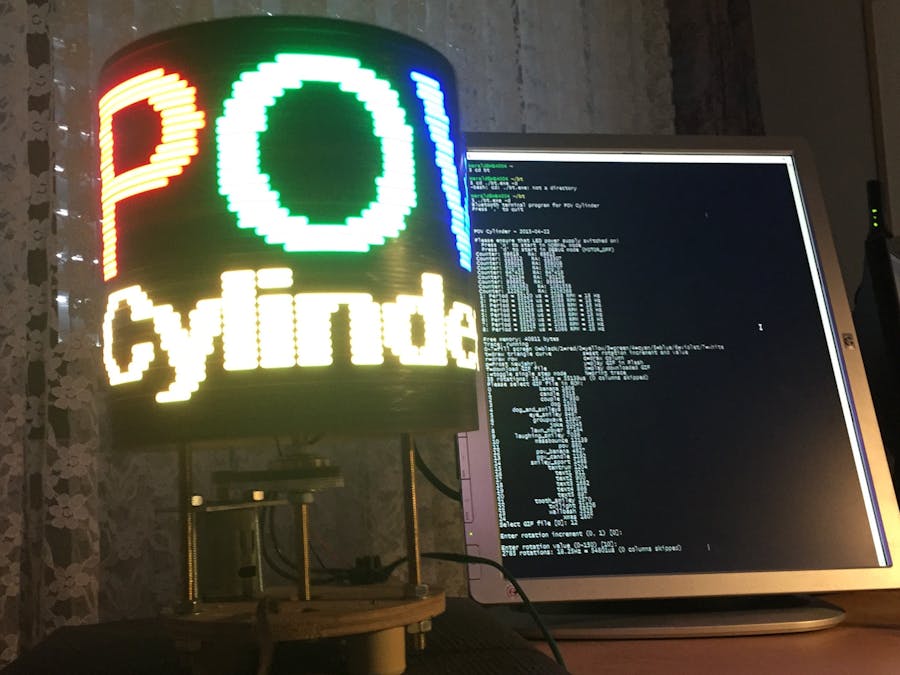 This is my first Arduino project. My work was inspired by several maker projects that created Persistence of Vision Displays [2,3,4].

Persistence of vision (POV) refers to the optical illusion whereby multiple discrete images blend into a single image in the human mind and believed to be the explanation for motion perception in cinema and animated films [1].

The main features of my POV Cylinder are:

The mechanical construction is shown in the drawing below.

Mechanical Construction (not to scale)

The device comprises a chassis and a rotor. The chassis consists of two circular plywood disks which are connected via three threaded bars. The distance between the disks is 120 mm. In the middle there are two ball bearings and the shaft. For the shaft also a threaded bar is used. The shaft is driven by an electric motor via two crown gears and a toothed belt. The rotation speed is up to 1300 RPM (22 Hz).

The electronics is located in the upper part of the rotor. It includes the following parts:

Four LEDs strips with in total 40 RBG LEDs are used. They are connected with cables to the Arduino Shield.

The electronic circuitry is shown in the attached PDF schematic.

There is also a self-made shield for the Arduino. It contains the connector cables to the LED strips and a circuitry for the IR receiver. The IR receiver is used to detect the rotor position. It is connected to a timer/interrupt input of the Arduino.

There are four LED strips named STRIP0 to STRIP3. Each strip has 5 LPD8806 LED drivers and 10 RBG LEDs. STRIP0 is connect to USART0 and STRIP1 is connected to USART1. Both USARTs are operating in SPI mode. STRIP2 and STRIP3 are connected in series and are driven by the Arduino's SPI interface.

The Arduino software consists of the main program (mpc.ino) and the following libraries:

There is one frame interrupt per revolution triggered by the IR sensor. The frame interrupt routine measures (via a hardware timer) the evolution speed and programs periodic column interrupts (one per column, i.e. 150 interrupts per revolution) with a hardware timer. The column interrupt routine outputs the current column to the LED strips. For performance reasons output is done via three DMA channels that operate fully in parallel.

The full Arduino source code is available at github.

The PC Control Program (pccp) is a command line tool written in C++. It is running under Cygwin and communicates with the Arduino via Bluetooth. The pccp allows to control the POV Cylinder with the following single character commands:

The pccp also provides an interface to a graphical user interface. Furthermore it displays the current rotation speed (in Hz and µs) and a frame counter value.

The full source code is available at github.

The graphical user interface is an Universal Windows App. It allows to select the GIF file to be displayed by the POV Cylinder. The app has been derived from the FilePicker app from the "Microsoft Windows Universal Samples" [5].

The full source code is available at github.