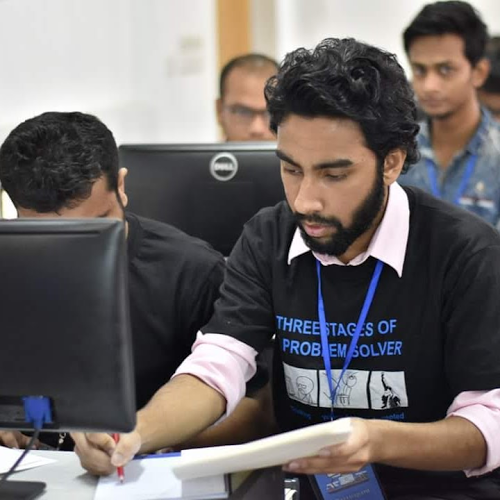 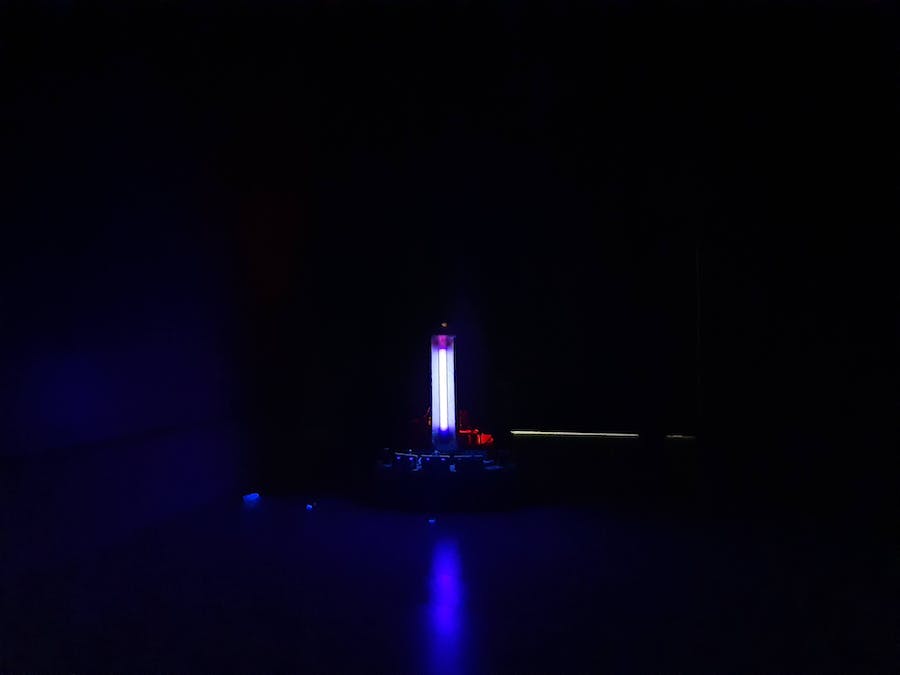 Completion of Our Prototype

Other Disinfection Projects and Their shortcomings

Disinfecting Process on the go

How UVGI can help

Ultraviolet germicidal irradiation (UVGI) is a disinfection method that uses short-wavelength ultraviolet (ultraviolet C or UVC) light to kill or inactivate microorganisms by destroying nucleic acids and disrupting their DNA, leaving them unable to perform vital cellular functions. UVC is absorbed by RNA and DNA bases and can cause the photo-chemical fusion of two adjacent pyrimidines into covalently linked dimers, which then become non-pairing bases.

UVGI is used in a variety of applications, such as food, air, and water purification. UVGI can be used to prevent the spread of certain infectious diseases. Low-pressure mercury (Hg) discharge lamps and LEDs are commonly used in UVGI applications and emit shortwave ultraviolet-C (100–280 nano-meter) radiation, primarily at 254 nm । Source

Functionality of the Robot:

How We built it:

Chassis is made of plywood which is easily available in most of the hardware stores. Had it built in such a way that it can traverse in all areas and all the equipment can fit easily. For this, the preferable shape should be circle/oval shape. The chassis circular shape radius is 5 inch.

All measurements can be found in the AutoCAD design(.dwg) file.

fig 2.1: Assembly of Motor and Wheels

Mounting Sonar Sensors on the chassis:

Used Glue gun to mount sonar sensors on the chassis body and card-board paper is used to make them elevated and balanced.

Mounting IR receiver on the chassis:

Used female header pins soldered on the Vero board to attach IR receiver and hot glued it on the chassis and the connecting white wires works as VCC, gnd and Signal.

The IR beacon/transmitter circuit is extracted from an old tv remote which has some button malfunctions. To keep the beacon always working, had to short a button. The beacon generates frequency at 38KHz and the robot tries to follow that path.

We Had to purchase 4watt UVC tube light. As the light needs to be portable while it's moving along side the body, so an inverter circuit is required. The schematic diagram is found on the contributor link. The circuit harvests power from a 3.7volt 1100mAh lipo battery and powers the light.

fig 5.1: UVC Light housing,assembly on the chassis(Images are slightly Incandescent for poor camera)

Equation 1 shows the relation between the dosage and the intensity. It concludes that different dosages can be achieved by varying the exposure time to the same UV light source.

Circuit Diagram can be found on the fritzing file.

fig 6.1: final circuit assembly and vero board housing on the chassis.

8 projects • 17 followers
Hello there. Welcome to the realm of hardware and interfacing. Have been a microcontroller enthusiast since 2011.
ContactContact

1 project • 0 followers
ContactContact
Thanks to Electronics hub and pi my life up.