Blink an LED from your smartphone without any coding thanks to Hackeet, a private-by-design low-code application development platform.

Blink an LED from your smartphone without any coding thanks to Hackeet, a private-by-design low-code application development platform.

Hackeet is a low-code visual programming tool that allows you to connect hardware or software components together to create Web Applications and Micro-services for Microsoft Windows, Raspberry Pi and Arduino / ESP8266 devices.

Install the latest versions of Hackeet and of the Arduino IDE on your Raspberry Pi.

You need a license to start Hackeet. You can get a free one by following the instructions on the this page : Hackeet : Get Started

At last, install the Hackeet package for Arduino and ESP8266 that you can download here (click on the Pin node for example to get the installation instructions).

You can find all the information about installing Hackeet and component packages on this page.

Before using Hackeet with your ESP8266 or your Arduino board, you need to configure it first.

If you are not very familiar with the Arduino IDE, you can refer to a more detailed installation guide here.

Great ! Your ESP8266 device is now ready. So now, let's build the circuit.

Do I really need a resistor ?

Here you are ! You are now ready to start coding!

Before going any further, some words about coding with Hackeet.

Hackeet is a low-code visual programming tool that allows you to connect hardware or software components together to create Web Applications and Micro-services for Raspberry Pi, Windows and Arduino / ESP8266 devices. Building an application with Hackeet is just a matter of connecting together nodes, which are elementary blocks in charge of performing actions such as sending an e-mail or moving a robot. Applications built with Hackeet run directly on your own hardware and thus preserve the confidentiality of your data. You can find additional information about used terms and concepts on this page.

If you want to go faster, you can download the application here and open it with Hackeet.

As already mentioned, nodes in Hackeet are components that are able to carry out one or several actions. You have nodes to send or receive tweets from Twitter, perform automated phone calls with Twilio, publish data to MQTT servers, etc.... Endpoint nodes are no exception and their role is to receive inputs coming from users.

Nodes are able to exchange data through wires, i.e the arrows that connect them. When a node is "hit", it's to say when it receives data, it performs the action that it has been made for and then, may eventually propagate new data in its turn to the nodes it is connected to.

If we dig a little deeper into the details, when you build a web application with Hackeet, what you are actually doing is creating a REST API. In such a context, Endpoint nodes represent the endpoints of your API. If you have already tried to use or create web services, the concept of endpoint should sound familiar. For those of you for who it is not clear, let's say in a word that each Endpoint node added to your diagram when designing the application will result in an actual URL that you will be able to use to send data to your application when running.

You can specify data that are expected from users by adding attributes to Endpoint nodes.

In our case, we want the user to provide an information that specifies whether the LED has to be on or off. So we will add an attribute to the Endpoint node that we are calling to call led (name can be chosen freely but we are not very original).

When data will be received, it will be then forwarded to the Pin node though the wire that connects the two nodes together. At last, the Pin node will turn on or off the LED according to the value entered by user.

So, now that this is said, let's continue!

If you want to know more about how functions and formulas are used in Hackeet to perform basic calculations and processing (such as printing a log message), refer to this page

We have tried to show here a very basic application that can be made with Hackeet. If you want to have any further information about how Hackeet works and build more sophisticated applications for your ESP8688, Arduino and Raspberry Pi, do not hesitate to visit our website. 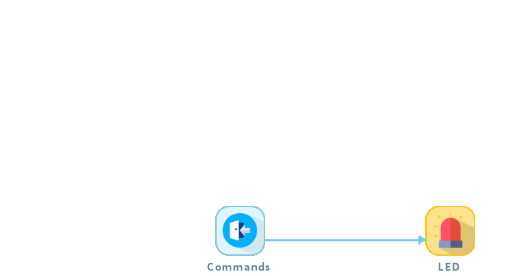 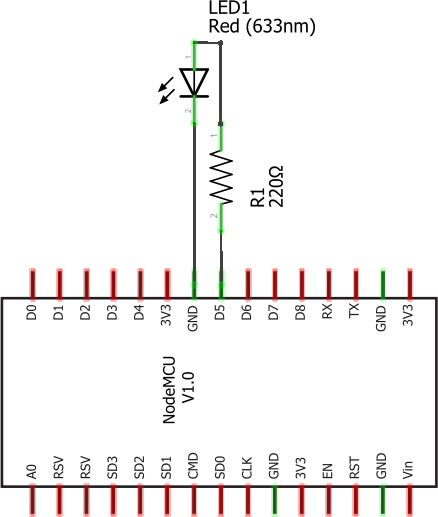