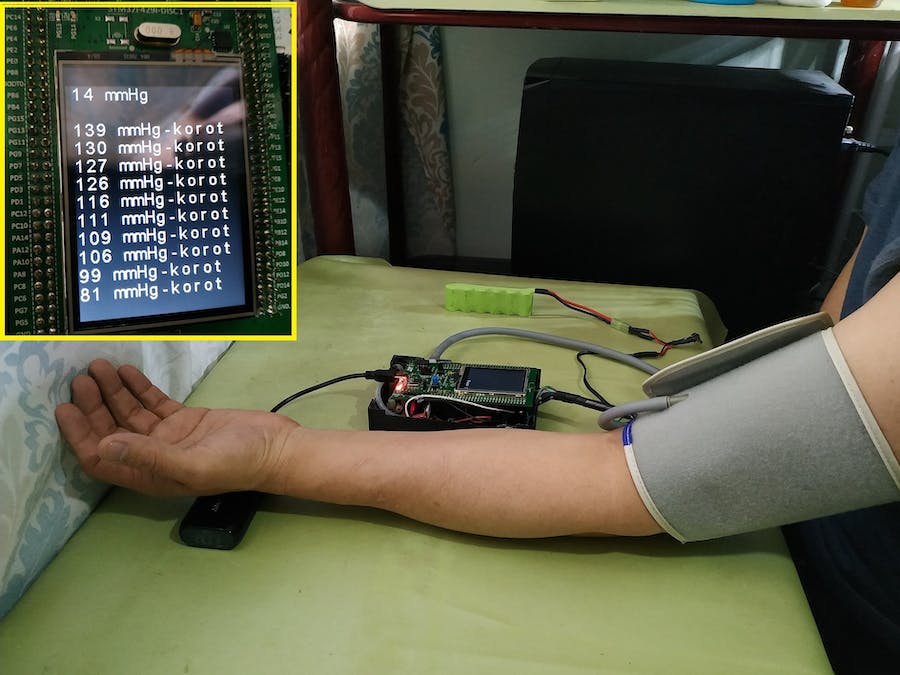 I once worked in a company that sells health-care devices and I've knowledge of how blood pressure monitors work. In this project I will use a micro pressure sensor to detect Korotkoff sounds, which will help me to calculate systolic (maximum) and diastolic (minimum) blood pressure. There is another method called the oscillometric and I will not use it because I don't have enough hardware and time to finish it. However the oscillometric method is based on the Korotkoff sounds and each manufacturer develops its own mathematical algorithm to find systolic and diastolic pressures. Reference: https://www.nature.com/articles/s41371-019-0196-9

I can tell you that the project that was made with GNAT Programming Studio is my own and my creativity (source code, schematic diagram and flowchart). For the rest, I used and modified the arduino demo code from the pressure sensor manufacturer, and the code to send the test data to excel. Let's get started with the list of necessary hardware.

Korotkoff sounds are the sounds that medical personnel listen for when they are taking blood pressure using a non-invasive procedure. They're named after Dr. Nikolai Korotkoff, a Russian physician who discovered them in 1905, when he was working at the Imperial Medical Academy in St. Petersburg, Russian.

If the cuff of a sphygmomanometer is placed around a patient's upper arm and inflated to a pressure above the patient's systolic blood pressure, there will be no sound audible. This is because the pressure in the cuff is high enough such that it completely occludes the blood flow.

I bought this sensor two months ago, the libraries are made to work in the Arduino IDE. So I used the demo example and modified it to convert the pressure data into mmHg, remove the atmospheric pressure component, and send the data to the output of the DAC_1 (analog digital converter), on pin D25 of the ESP32-WROOM-32 board every 200 ms.

There're 2 channel 8 bit DACs in the ESP32 to convert the digital signals into analog voltage signal outputs. So value 1 corresponds to 11.76 mV, value 2 corresponds to 23.53 mV ... and value 255 corresponds to 3000 mV. You can download the code in the download section as pressure_sensor.ino.

The STM32F429I board was programmed with GNAT Programming Studio 19.1 Developed by AdaCore. This part develops the most important control function of the system and I will detail below. The schematic diagram and the flowchart you can get at the end of this tutorial. As a reference for this project, I've used the following Ada tools:

The analysis of the code of the digital blood pressure monitor I've divided it into three sections:

Our schematic diagram is shown below:

6. Inflation of the Cuff

7. Deflation of the Cuff

8. Calculation of the Korotkoff Sounds

Here you can get a tutorial to send the data to Excel: https://github.com/gsampallo/serialToExcel

And you can download my excel file at this link: Korotkoff_sounds_excel

The hardware is assembled in a box for the best handling of the device, in the figure below we can see the box made with a 3D printer, and whose STL file you can get in the download section.

Next, we join the solenoid valve with the connector through which the cuff can be connected.

Now we glue these pieces with silicone over the box's groove shown in the figure below.

Glue the pieces indicated on the box

We connect the micro pressure sensor with the air pump with an air hose. Then we fix the pressure microsensor as shown in the figure below.

The next step is to fix the ESP32-WROOM-32 board as shown in the figure below.

Finally, place the STM32F429I board and the L298N driver as shown in the figure below. All electrical connections are followed as in the schematic diagram.

In the video below I show you my first tests with this health device. In the first part, we see a test where I get six Korotkoff sounds. In the second part I did a close up, so you can see the data on the LCD screen.

To increase the amount of Korotkoff sounds detected I did two things:

I've getting ten Korotkoff sounds in this test, and we can see them in the figure below:

Finally, I had check my blood pressure and compare it to the second test.

To develop this project I learned that it's necessary to verify and analyze each step to follow, eg:

This project is complex, so I suggest the following challenges to improve it:

This is how a digital blood pressure monitor is manufactured. 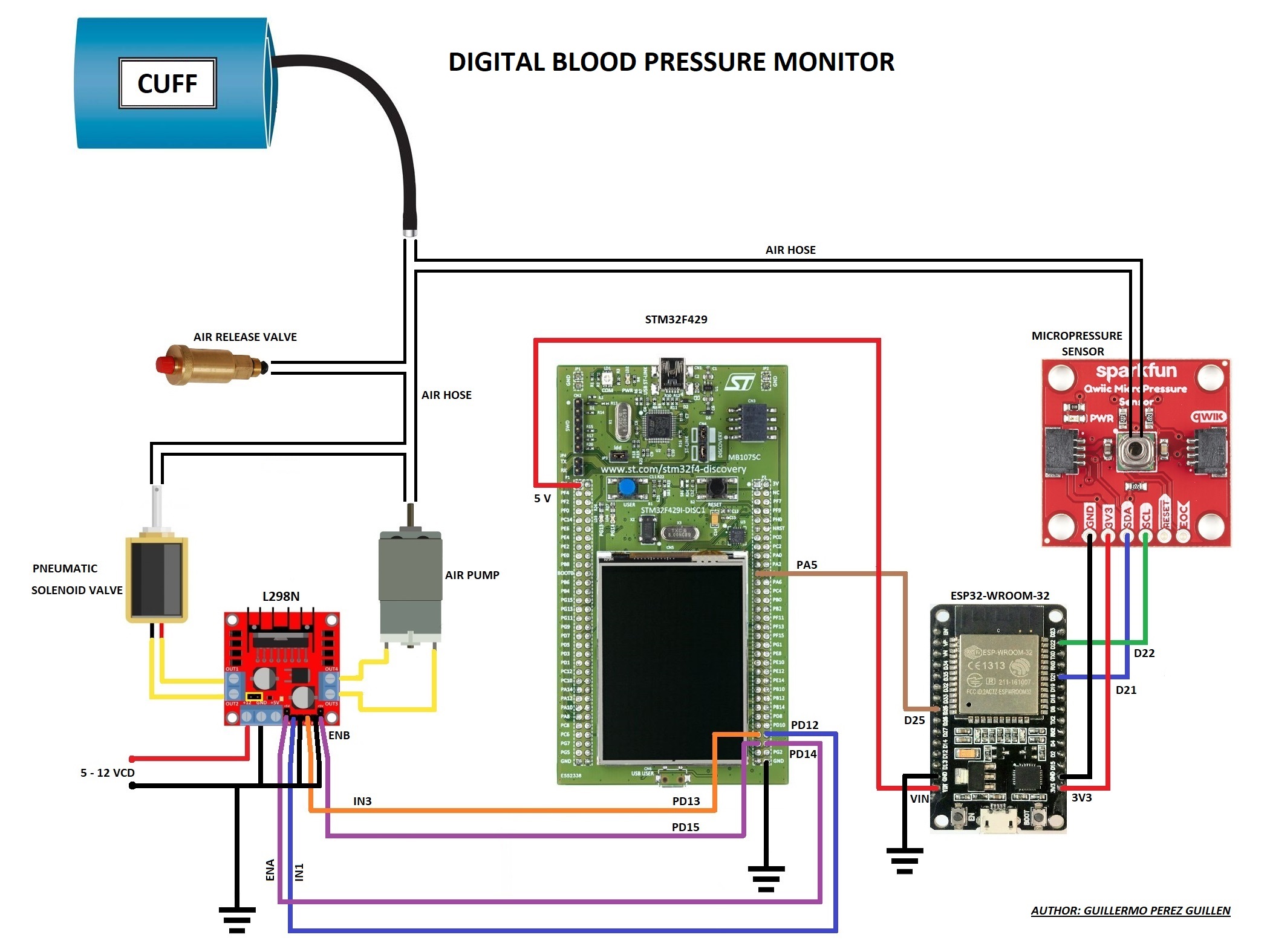 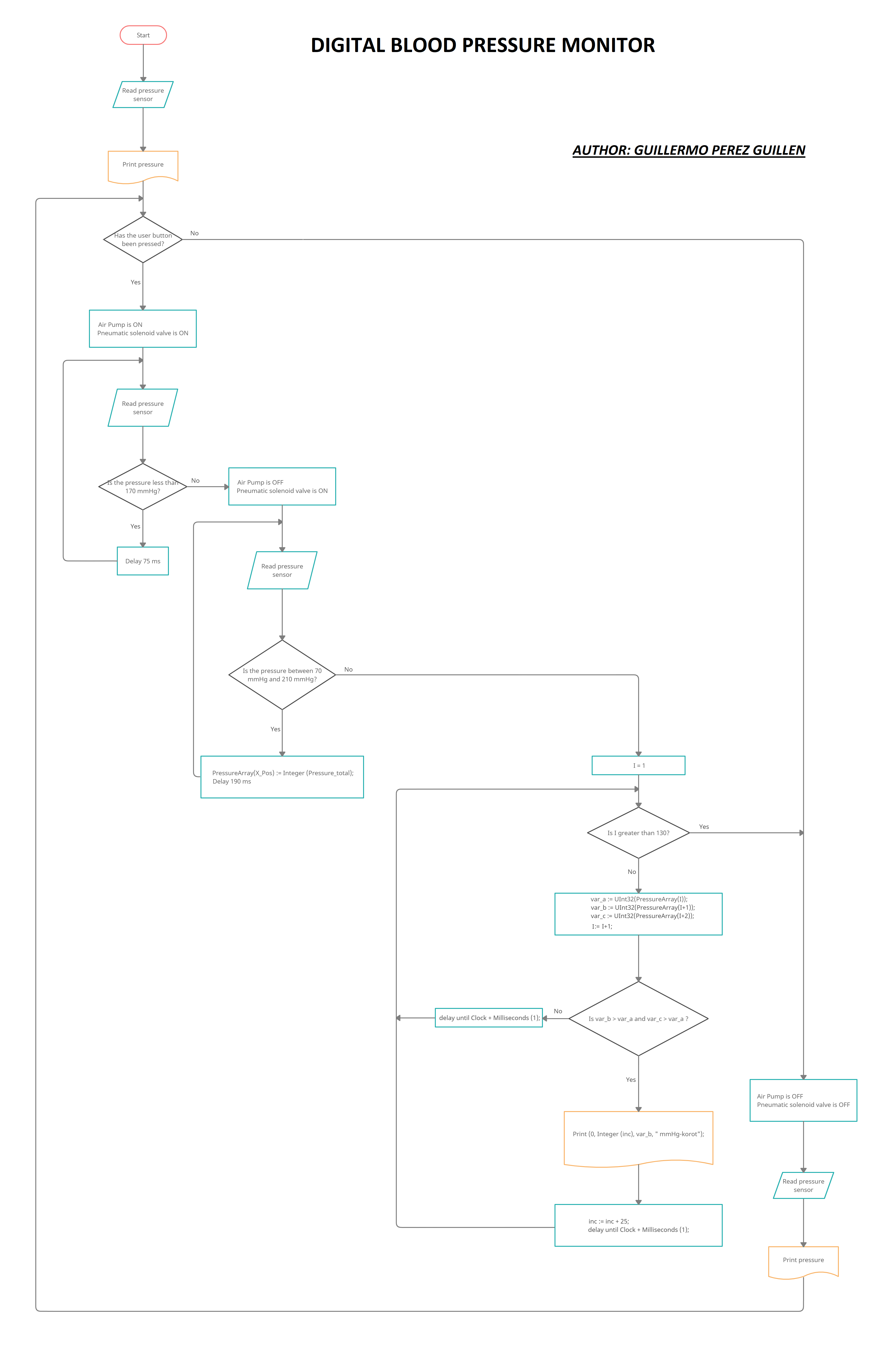