Our project detects sound and the data is collected so that we can measure at what points in the day has the highest amount of volume.

Our project detects sound and the data is collected so that we can measure at what points in the day has the highest amount of volume. 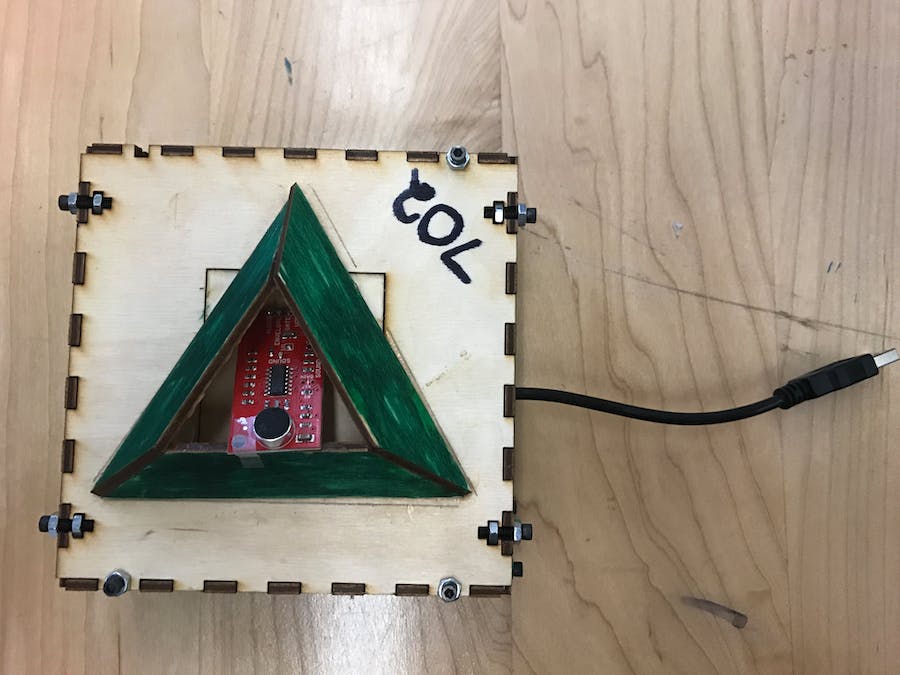 The journey began with a question... "What if we could tell a story through sound?"

This question is interesting because if we could use the sound data collected to somehow show what happened during the time frame of huge spikes in sound, we can make inferences backed with metadata about what really went on that day. We decided to measure the highest level of sound everyday every minute for a week. We felt it was best to put the sensor in a music room because we could use the data to show what certain points in the day had the highest levels of sound.

Building our device was no easy task as there were many ideas that had to go into prototyping and design. We needed a structure that could collect sound efficiently, so initially we went with a pyramid shape but found many complications. There was no way to mount a pyramid on the wall without having it fall or fail to collect efficient data. Then we came up with our design to have a rectangular prism with a open pyramid on top to be able to mount it properly and collect the sound we needed.

The code was developed in a way that would efficiently collect multiple sound readings and convert them into a average amount for that reading. This would occur every minute so for an entire day of school it would collect this data.

Some challenges we discovered were with the design and how to create a device that had a shape that collected data in the most efficient way but also looked professional. Some other challenges we had were with the code that took the data from the device and inputed it into a google spreadsheet.

What we learned from this project was how to come up with a question that was interesting or important and how to develop an idea and turn it into a physical device. From our project we learned about the collection of sound data and how it could be turned into interesting data for us to share with people such music teachers.

1 project • 2 followers
YA YA YA
ContactContact
Thanks to Array of Things, Particle, Motorola Solutions Foundation, and Lane Tech High School.