The idea behind this project is to explore applications of Amazon Alexa in an industrial/factory environment as a worker support system.

The idea behind this project is to explore applications of Amazon Alexa in an industrial/factory environment as a worker support system. 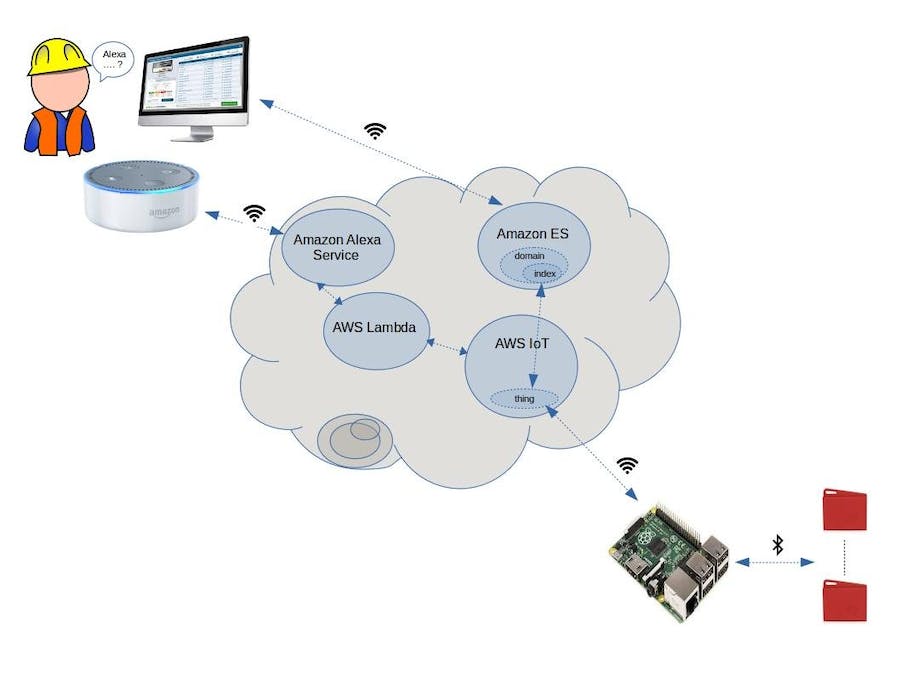 Alexa Skill to access and visualize on a web page data streamed from a TI SensorTag CC2650 to AWS IoT and Amazon Elasticsearch Service via a Raspberry PI 3 Model B gateway.

The motivation behind this project is to explore possible applications of Amazon Alexa in an industrial/factory environment as a possible worker friendly user interface, especially useful for workers that may not be computer literate. Through Alexa the worker would be able to ask for certain critical system parameters or error conditions, and to have some useful information displayed on a web connected monitor. The project presented here is a simple proof of concept with a much more limited scope. The SensorTag sends via bluetooth the data to a Raspberry PI, that acts as a gateway and forwards the data further to the AWS IoT servers. The data received by the servers updates the corresponding device shadow and is then pushed to Amazon Elasticsearch Service to be available for further processing and analytics, otherwise it would be lost as soon as a new update comes in. An Alexa Skill frontend can be used to retrieve the latest sensor values or to display a recent history for any given sensor. This data visualization capability is provided tanks to the Kibana plugin available in Elasticsearch service. The code developed here is based on examples provided in both the SensorTag Node.js library repository and the aws-iot-device-sdk-js repository. For more in depth information you can have a look there. Code and ideas have been also borrowed from some of the examples in the Alexa Cookbook repository, the web app used for the visualization is a minimally changed version of the one provided there. At the moment the data acquisition script that runs on the Raspberry PI samples the SensorTag around every 10 seconds, but this can be easily changed.

The instructions below have been tested on a development workstation running Ubuntu 16.04 LTS.

No setup needed. Just make sure the battery is connected and press the power button (the smaller one) on the side to start searching for bluetooth connections.

The management of the various Amazon AWS services used in this application can be done programmatically via the AWS CLI, but there are still certain operations that can only be done through the AWS Web Console. Instructions for most of the AWS services used are included here, except the ones referring to the Alexa Skill, that have been described separately. Make sure before start you have both an Amazon Developer and AWS accounts. The first step is to download and install the AWS CLI. To do it you can follow the instructions here. Please be aware that all the AWS resources and services utilized need to be located in the same AWS region, otherwise they won't be able to interact properly.

We can start by downloading the security credentials needed to access the AWS servers running the commands below. These commands can be saved as an executable bash script or as a bash alias for future use.

We can then create the thing that will map the state of our Raspberry PI in the context of the AWS IoT cloud:

Any time the Raspberry PI sends a new update to AWS IoT the thing shadow document linked to the corresponding thing is updated with the new device state. Afterwards this update is forwarded also to a dedicated Amazon Elasticsearch Service domain, where it is stored for future reference. For this to happen we need to create first an ES domain and then to specify an AWS IoT Rule to feed the data from AWS IoT to ES. I created the Elasticsearch domain through the web console first and named it sensor-data. At the same time there is the need to specify an access policy for the domain:

I had also to create a security role, called iot-es-action-role, through the AWS IAM console to give AWS IoT the rights to connect to ES using the rule defined below:

where the JSON configuration file is:

The ARN in the file above is the one of the IAM role and can be retrieved from the IAM console. The endpoint is the same one used above. The next thing to do is to define the structure of the index that will be used to organize data inside the ES domain created above. This is done again through the shell:

At this point all the infrastructure required to receive and process the sensor data should be in place. We can now focus on developing the front-end of the application with the custom Alexa Skill, as described in the next section.

The bridge between the voice interaction model and its Lambda function is represented by the Alexa Voice Service (AVS). The voice interaction model (VIM) can be viewed in fact as a sort of configuration file for the AVS. Thanks to a VIM the AVS knows for what words and sequences of words to look for whenever an Amazon Echo or other enabled devices sends to the AVS the actual audio stream recorded for the conversation. The AVS receives this audio stream and based on the specification encoded in the VIM decides what functions (handlers) to activate among those exported by the corresponding Lambda function. The Lambda function can then call other AWS services or services hosted elsewhere as needed. I will start first creating a new skill through the Amazon Developer Portal as shown below:

Create a Skill in the Developer Portal

In the case of our sensortag skill, the voice interaction model is defined by an intent schema,

This information can be specified through the Amazon Developer portal, in the Alexa section.

The ARN referred above is the one for the execution role, the default one, associated with the function that can be retrieved on the AWS IAM console and the zip file is the archive that contains the node.js script for the function, together with all the libraries it refers to. If you're using AWS Lambda for the first time you will need to create a basic execution role, as explained in the picture below, and then copy its ARN in the file above, otherwise you can use a pre-existing role.

Create an IAM role for the Lambda function

This will install the node.js libraries under the /node_modules/ directory. After that, still from the same alexa-amazon-iot/skill/src folder, you can run the following command:

For future updates the lambda function can be modified running:

Save the ARN for the function returned by the command above. We will used as as one of the skill configuration options. If you create the lambda function through the command line as suggested above you still need to manually select what type of triggers can activate it (in our case the Alexa Skill). In theory this is something that should be doable from the CLI, but in practice the corresponding command refused to work for me. I had to login into the AWS Lambda Console, select the newly created lambda function and manually select the type of trigger that I wanted, as described in the picture below.

Select the Trigger for the Lambda function

Once the data is available in the Amazon Elasticsearch service it can be visualized using the embedded Kibana plugin. The visualizations can be fully customized, and once they are saved they have an IP address that can be used to retrieve them. This IP addresses need then to ber copied into the /alexa-amazon-iot/webapp-thing/js/updateDom.js file. The picture below shows one possible way to organize some of the sensor's data into a visualization that can be displayed by the web-app.

The public IP address of the machine where the browser is running must be specifically enabled in the access policy document of your Elasticsearch domain for the application to work. The web app requires also the creation of a AWS Cognito Pool, whose ID needs to be specified in the /alexa-amazon-iot/webapp-thing/js/aws_config.js file. Follow the instructions in /alexa-amazon-iot/webapp-thing/README.md to do that.

Install the latest Raspbian and log into the system directly or via SSH. Do a system upgrade, check for the version of Node.js included and install npm, the node package manager.

Install also the bluetooth libraries and the SensorTag dependencies.

Copy the package.json and data-acquisition-and-forwarding-to-aws-iot.js files to the PI and run

to install the dependencies required by the script and listed in package.json. Run the script:

Always run the script as sudo, otherwise there may be problems accessing some of the library modules. The section of the script where the object that represents the AWS IoT API is initialized needs to be customized with your personal security credentials, plus the ARN for the thing shadow mapped to the physical device.