Print a file to a thermal printer when you push a button on your RasPi. Get creative!

Print a file to a thermal printer when you push a button on your RasPi. Get creative! 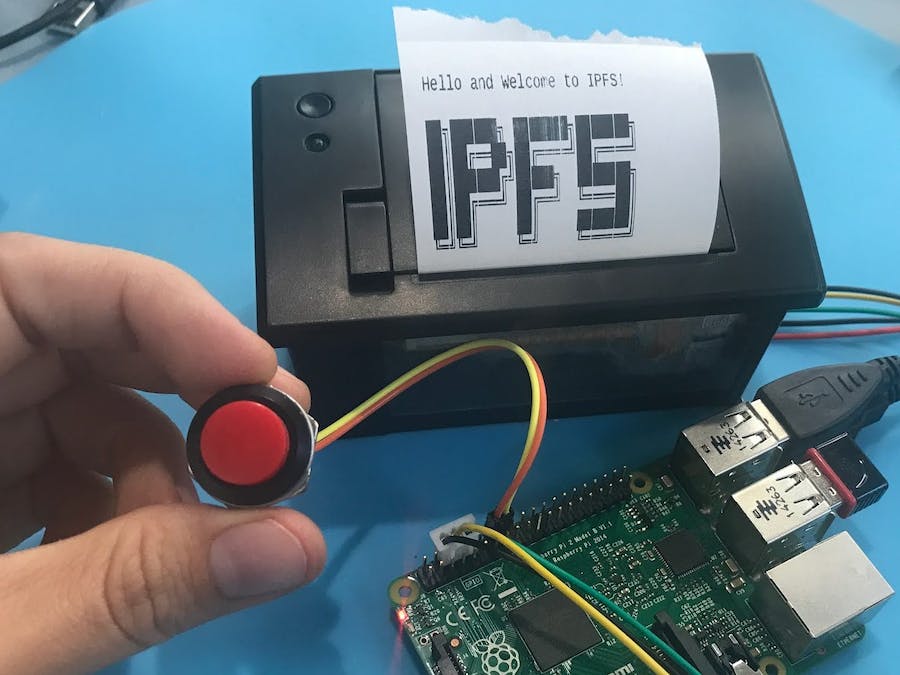 For my next project, I'm building a machine to simply print a bunch of files by pressing different buttons.

We're basically going to mash together these two tutorials:

In the end, we'll write code to print arbitrary text, an image file, a saved text file, and a file retrieved from the Interplanetary File System – a new type of decentralized web!

I'm using the Mini Thermal Printer starter kit – follow the Adafruit tutorial to set up your printer with TTL, but you don't need the last networking part.

Step 1. Printing from a Button

See the attached printtest.py for this code.

Since the thermal printer is plugged into the Pi's RX and TX pins for TTL control, I don't have room to plug my test button into GPIO pin 18. So, I moved down and put it on pin GPIO23 + GND instead:

(It doesn't matter which button wire goes on which pin.)

Then, I initialized the printer (using the port and baud rate I found during the Adafruit tutorial – which doesn't change if you unplug the printer or Pi, unless you're plugging more stuff in):

I continued according to my "Shutdown/Restart Button" tutorial, using the os.system function to run the print commands from the Adafruit tutorial.

The first test worked! To use the script, run:

As with my previous tutorial, you need to run as the superuser (that is, with sudo) because it's required to use the GPIO pins.

Here's the feedback from that first test – I pushed the button a couple of times, and the end part (starting at ^C) is me killing the program with Ctrl+C:

a screenshot of the command, with multiple feedback lines "request id is ZJ-58-..."

Next, I wanted to send a text file to the thermal printer. I've saved some text into the file welcome.txt, in the same Scripts directory with printtest.py .

Since I was running with sudo (and therefore as root), I had to specify a longer path with the pi user's home directory in the command:

Using the CUPS filter as described in Adafruit's tutorial, the printer automagically reformats text to fit the page. Good news: you can enter arbitrary text without it being cut off! Bad news: ASCII art gets reformatted :/

You can monkey around with scale to fix this; I wanted to print the welcome text for the Interplanetary File System, so I used "-o cpi=18" to set the characters per inch to 18, rather than the standard 12, since the ASCII art is about 50% longer than the default page width.

This depends upon you having set up IPFS on the Raspberry Pi. I used "ipfs-rpi" by Claudio Bizzotto (setup video coming soon!). Then, I updated the Python script to pull down the readme and print it out.

The print-ipfs.py file attached to this tutorial contains the code for this!

I needed to cancel lots of prints to save paper during testing! I haven't yet found a great way to do this with commands, but I did it by hitting Ctrl+C and yanking the printer power for at least 10 seconds ^_^

This isn't edited down yet, but here's my first time setting up the thermal printer, with all its thrills and spills (and fire! see 13:00)...