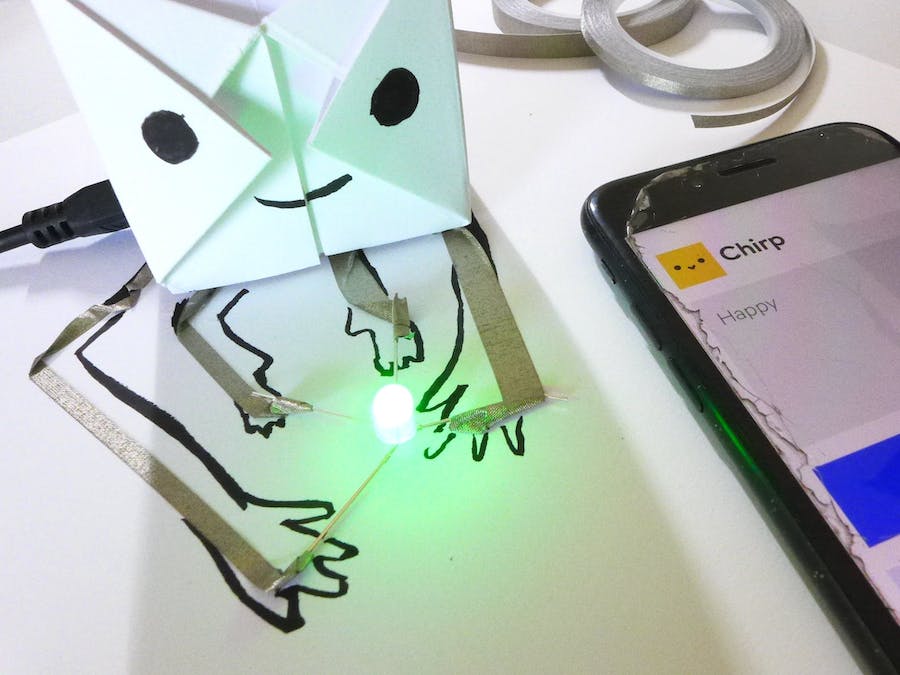 This would be a great "My First Companion Bot"... except that, unfortunately, it relies on a technology (Chirp) that is being phased out. :( I always wanted to make a companion that could communicate with Chirp, so I guess this is the closest I'll get.

I built this li'l guy for a livestream with Brown Dog Gadgets... It responds to emotions sent from my phone, using Artoo-esque blips and bleeps and lighting up its LED for each mood.

I didn't want to use solder or wires at all, so I just wound the conductive Maker Tape around the legs of the RGB LED. Then, I took the other end of each piece of tape, rolled it into a point, and put it through a hole in the Arduino to make a connection. (To prevent shorting them together, I chose pins that were far apart: GND, D4, D7, and D10.)

Since this was my first time doing it, the tape looks pretty janky! But it worked on the first try!

For the robot's exoskeleton, I folded a little paper balloon, like I used to make as a kid. The paper I used was a little too stiff to inflate easily, but that rigidity helped me later, when I decided to cut and fold the bottom side out of the way. I plonked the little "head" on top of my circuit, and drew a face, legs, and arms to give it some personality.

The code is a simple layer on top of Chirp's "Receive" example code. When it hears one of three moods (Happy, Sad, Love), it lights up its LED in the corresponding color, for 10 seconds.

It could be pretty easily adapted to control other attachments, or work with services other than Chirp – which is the next step for my bots! I think this Nano is a great brain for your first little robot project, and with origami and Maker Tape, together they're a pretty kid-friendly platform.

Here's the original livestream, which unfortunately ended early because I had to restart my computer: