Get started using a Pi 3 with Intel's Neural Compute Stick 2, to detect objects and faces.

Get started using a Pi 3 with Intel's Neural Compute Stick 2, to detect objects and faces. 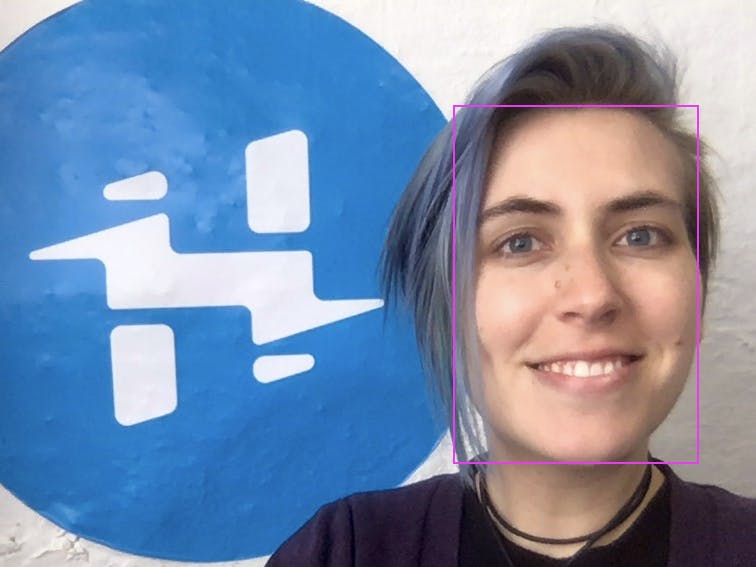 OpenVINO is an open-source toolkit that melds classical computer vision and deep learning. It provides a consistent API to run inferences across a variety of devices, including Intel CPUs, VPUs, FPGAs, the Neural Compute Stick 2, and more – using C, C++, or Python. There are a bunch of pretrained models and code examples available, so I'm excited to play with it for my companion robots. :)

As you can see in the tests below, this model is pretty powerful, and I'm interested to try new things and see if I can break it. I'm generally not a fan of proliferating facial recognition tech, so this is a fun way to develop new counter-methods.

You can find installation guides for a variety of platforms in the excellent documentation.

I recently installed Raspbian Buster on a Raspberry Pi 3 Model B+ and followed Intel's instructions for installing OpenVINO on that platform, to use with the Neural Compute Stick 2 (NCS2). It went pretty smoothly, except for a couple of errors. If you're trying to do the same thing, hopefully this will help you.

I also attached a Raspberry Pi Camera v2.1 module, which I'm using to grab images to run inferencing on.

To be honest, I didn't do much with this one – I was more interested in seeing what I could do with the second example. But I got it up and running, and resolved an issue during the workflow, which could be useful for you.

While trying to run the this sample, I first hit an error on this command:

The error I got was:

I found a closed issue for this on GitHub, and user henry1758f recommended appending /cpp to the end of the command. That worked for me!

I was curious about what I could do with the face detection model with OpenCV; to test it, I downloaded an image with 3 faces and copied it to /openvino on the Pi. When I tried to run the sample, I got:

Googling around, I found a description of a similar issue. User DavidC from Intel recommended trying the pre-trained model from the previous release. To do this, replace the.bin and.xml download commands:

Moving onward, the command I used to run this against my images was:

This worked, and I've attached a working log at the bottom of this tutorial – scroll down to the "Code" section for that.

It looks like they've now updated the tutorial to use a saved Python script, which makes the command a lot prettier to run! However, it does seem annoying to have to edit the file every time you want to use a new image or output to a new filename. I'm sure that more advanced code mages could easily route around that, though.

In the meantime, scroll down to enjoy a few examples of what it can do!

Capturing images on the Pi

I want to have my robot take pictures and run inferencing against them, so here's my workflow for that:

On the Pi (/openvino): This takes a photo, runs the model against it, and copies the result to my "image-results" folder. For each new pic, I increment the number.

And, to copy the resultingimage to my PC (from the target folder):

Images taken with the Raspberry Pi camera, using the above workflow: Even with the face shadowed / partially occluded, it works pretty well. A pink rectangle surrounds the face in each image:

I also tried this on a stock photo with multiple faces, and it marked each one:

And I tried blocking various parts of my face, and using different angles, to test the model's flexibility:

I ran a very low-res speed test using the stopwatch on my phone, hitting "stop" when the script prints "Image out0.bmp created!" I've highlighted the photos that are shown in the section above:

Even when I was intentionally trying to thwart the algorithm, it took about the same amount of time to find my face.

The models are going to keep getting better and better, and I can use some of those same models to test counter-methods.

One of my favorites is HyperFace, developed by Adam Harvey in collaboration with Hyphen Labs. It's a scarf with a "false-face computer vision camouflage pattern". Check out the description of how HyperFace works, reproduced below:

Rather than trying to obscure the face, HyperFace surrounds your actual face with hundreds of false faces. Wow! 😍

For further background on this question, check out the documentary Coded Bias by director Shalini Kantayya.