Stick-on, glowing LED designs that respond to light and sound!

Stick-on, glowing LED designs that respond to light and sound! 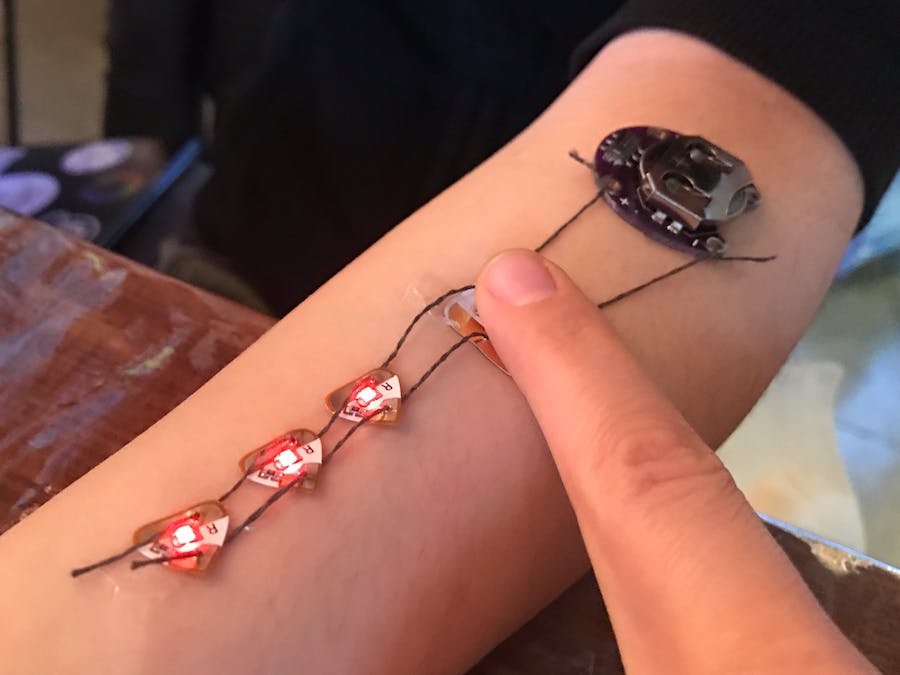 For Science Hack Day SF, we built some smart versions of the glowing LED tattoo project! These respond to sound and light sensors. After this one, I built a programmable tattoo that responds to orientation and can also show custom animations.

For this one, you'll need some Circuit Stickers and conductive thread. (You can get it at SparkFun, Adafruit, etc...)

1. Sew together the circuit

It took me a couple of tries to get the hang of the Circuit Stickers sensor system.

Make sure to lay out your circuit realistically, so you get the right amount of thread where it's needed, without big extra loops.

Be sure to test the circuit before you apply it!!

We were much more successful the second time around; I was able to use smaller pieces of tape to stick things down to Tiffany's arm, so it ended up looking a little nicer.

Make sure that your threads don't cross, or touch another circuit contact: shorts mean a nonfunctional tattoo!

Jonathan pointed out that Tiffany's light-sensitive tattoo could be used as a heartbeat sensor. Just place your finger over the sensor, then put your phone's flashlight behind it, making sure not to let any light spill over beyond your finger. As your heart pumps blood through the finger, it will obstruct the light... making your LEDs glow brighter.

Check out the next version, which can be programmed and responds to its orientation!

// Link to this tutorial: bit.ly/ledtat)