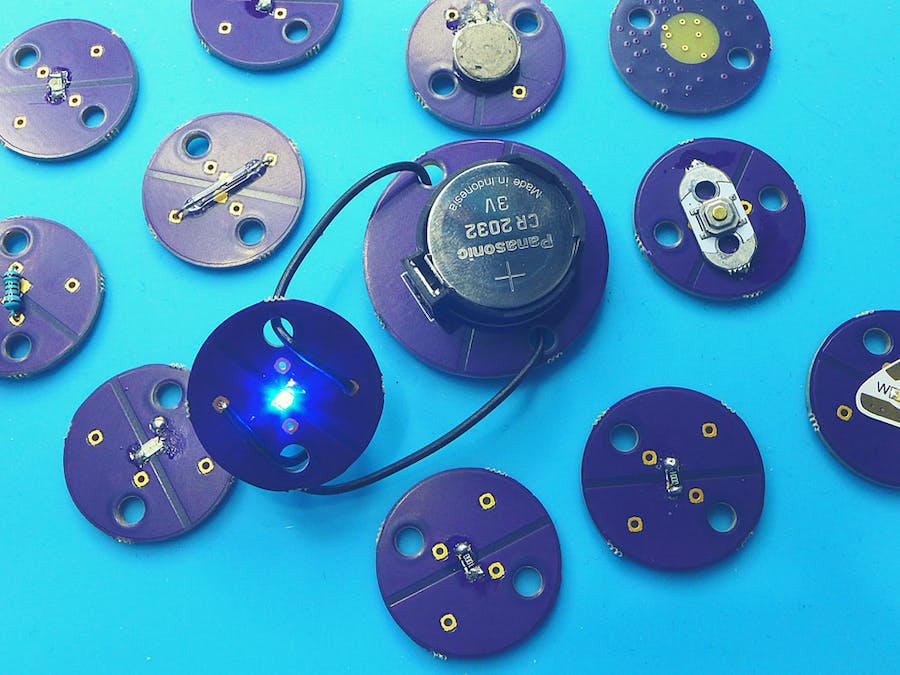 I'm building an open-source hardware charm project, which echoes how I think about circuit diagrams, turning that into wearable tech.

V1 was made real with the help of Turner Kirk, using Autodesk Eagle. I've also ordered a bunch at half-height on OSH Park.

These will all be named after SPACE THINGS!

Here's how to assemble these with through-hole and SMD resistors, surface-mount LEDs, CR2032 coin cell battery holders, a reed switch, a haptic motor, and a button! It was my first time ever testing these, so I was really happy that my simple demo circuit (battery + blue LED):

Notes on the PCBs

If I order enough for a medium run, OSH Park can also get the edges fully routed, so there are no rough bits. For now, I can snap off the panel connectors and sand down the edges.

Here's a good reference page for surface-mount sizes. These are designed with a 1206 package, big enough to solder easily by hand.

At first, I just wanted to create a way of constructing circuits with power flowing between components along organic lines, the way I visualize and draw circuit diagrams (rather than all squared off). It makes sense to me intuitively, so I wanted to be able to build them the same way. I think it might help others understand how circuits work.

I also noticed a cool trend: people turning child-friendly crafts into electronics. I thought I could do the same with beads. Here are a few of my favorites:

Designed for hardware learners: All parts can be soldered by hand. The Star board includes a 1206 SMD footprint, which is a size of surface-mount components that you can easily solder by hand. You can get LEDs, resistors, and more in this size – which will enable you to create very flat components, while maintaining ease of assembly. It's the best of both worlds.

Designed for PCB newbies: This is also designed as a learning platform for PCB design. Like with many other disciplines, I've learned by taking existing designs and modifying them. However, when you open up Eagle, the example you see is an entire Arduino. (Intimidating, much?) I want to share simple designs that can be modified with relative ease, even by total newbies, without tackling the entire learning curve at once. (PCB design has been, by far, the hardest skill for me to learn as a maker!)