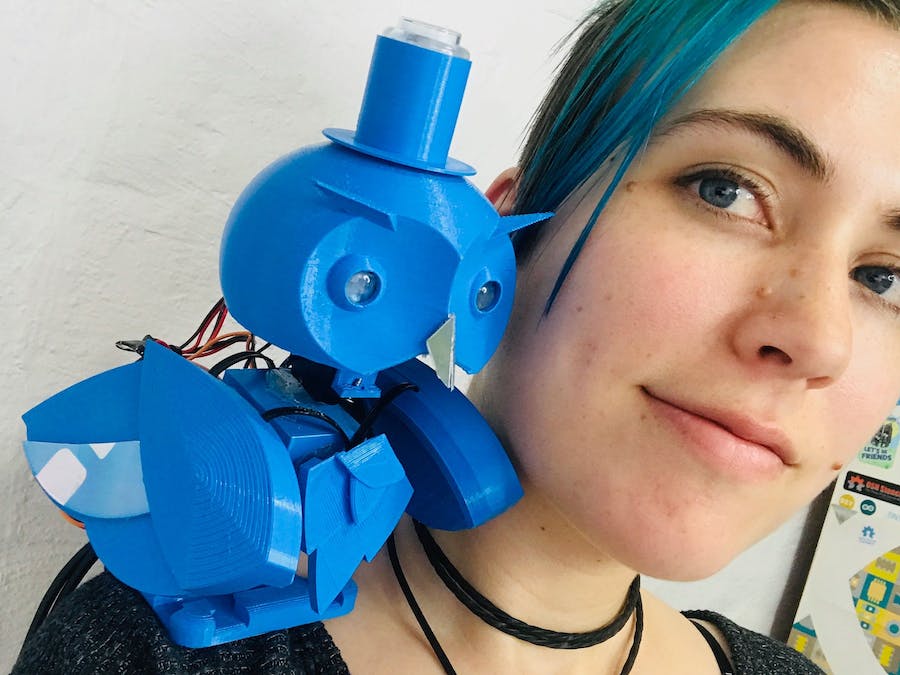 Archie's new form has a few changes from the original! Here are the original plans for Archimedes, from May 2018; he still lives in the Hackster office. :)

Archie's brain is no longer based on the Google AIY Vision Kit. Instead, he has an ESP32-powered MATRIX Voice module, which includes a ring of programmable RGB LEDs and an 8-mic array providing audio in.

I was initially planning to focus more on voice interactions and play around with Snips.ai and Mycroft, two privacy-focused smart voice assistant platforms, which both can run on the MATRIX devices. Plus, I wanted all future robots to be able to communicate via Chirp.io – a data-over-audio protocol that sounds like R2-D2 noises! Funnily enough, both services (Snips and Chirp) have been acquired by Sonos, and will not be good templates for others. :/ Oh well!

In the meantime, I've set Archie up with an Arduino Uno to run basic motion on his servos, with an Arduino Nano 33 BLE Sense running TinyML to add some smartness! (The Nano doesn't yet support the Servo library, so I need the Uno as middleman.)

Button: I still used the same type of button – in fact, I pulled this one out of the Google AIY Voice Kit. It's great because it has simple breakouts for RGB LEDs as well as the button itself. This means I can match the MATRIX Voice's LED ring colors to the color of the button on top, and create a coherent aesthetic to express different emotions.

Relatedly, the eyes now are simply moonstones glued in place to diffuse the LEDs; I removed his camera for now, but might reinstate it later, in another form.

- Servos: The top servo is much smaller, partly because of the proportions with the new brains, and partly to reduce weight. I've also been creating 3D-printable replacement servo brackets, so that you don't have to order a specific type and wait for them to arrive – plus, you can customize them to your own servos. The 3D-printed brackets are also lighter than the previous metal ones. The robot now works with GoPro brackets, as well, so it's a somewhat universal connector. And the shoulder piece is shaped to fit the shoulder (although I still use some padding underneath).

I wanted to play around a lot more with beautiful and iridescent materials, so this time, I incorporated more of the CD material and some semi-precious stones.

(Pro tip from Odd Jayy: you can clean stray hot-glue off of the CDs (or other surfaces) with rubbing alcohol!)

- Moonstones: Since he no longer has a camera and speaker in his eyes, those now serve as diffusers for the LEDs on the Voice board, which shine inside his head. I glued moonstone cabochons inside the eyes, which are beautiful even when the LEDs are off. (See picture above)

Archie's new harness is made of elastic and is much more comfortable than the previous version, which used armature wire encased in an old bicycle inner tube. V1 looked cool, but was a pain to put on and take off; plus, it required a lot of storage space. The elastic harness and 3D-printed shoulder mount store easily, leaving more space in the box for emergency materials.

This section is in progress! I'm swapping out Archie's brain to make him work better.

Set up your Pi:

Just before the assembly, when I was still using two large servos.
Read more