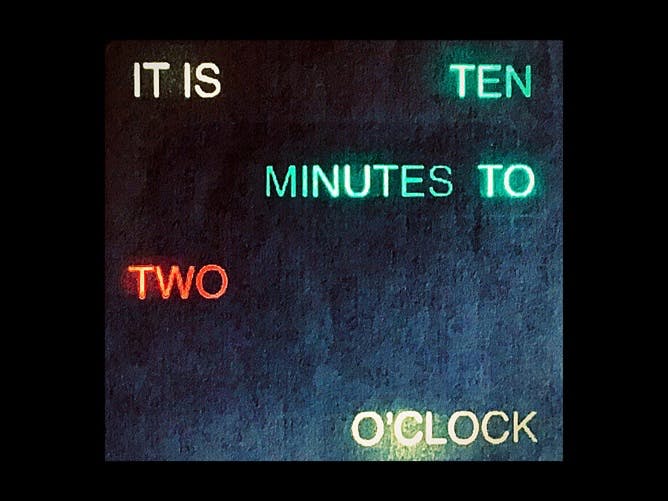 This was a project I wanted to do when I saw it on project hub, but using shift registers, external power supply and complicated wiring didn’t allow me to pursue it. When 2812b addressable LEDs became available I was able to reduce the size of the project where my Arduino could power the leds and programming could address them without shift registers.

Not having fancy equipment, ie 3d printer, printed circuit manufacturing, etc,, the masking parts are made of cardboard and the LEDs are mounted on cardboard without a printed circuit. The word plate is printed on plain paper however vellum or translucent plastic might be better. The circuit is simple and the size of the project requires no more than 7 LEDs to be on at any given time which allows The Arduino nano to power them.

First step was to print a faceplate layout. I chose to make it 7 cm by 7 cm so one LED could provide enough light for each word segment.

Connect LEDs. The LEDs on the layout below are numbered

The sketch as written shows the hour segments in different colors indicating AM or PM. Also the time is adjusted to the time the sketch is run so the RTC will be correct. No effort was made to shorten code as it is easier to understand as written.