Use an Arduino UNO, a Bluetooth chip and a high power relay to upgrade your lamp to be remotely controllable.

Add Remote Control to Your Lamp

Add Remote Control to Your Lamp

Use an Arduino UNO, a Bluetooth chip and a high power relay to upgrade your lamp to be remotely controllable. 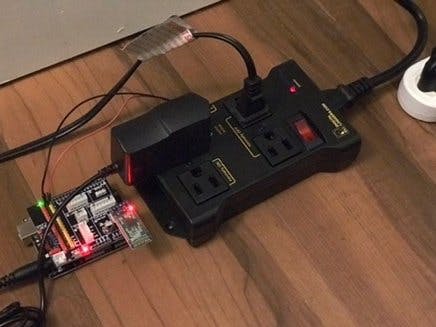 Recently I bought an Elegoo smart robot car kit. After playing with it for a while, I decided to use the components to do some practical projects instead of just toys. The kit has Bluetooth module, a cloned version Arduino UNO R3, and a shield to hook up Bluetooth chip and Arduino UNO. Why not build a remotely controllable lamp using these components? This is how the project starts.

At first I considered using some Relay shields on Arduino, but I don't dare to operate on the high power electric lines directly because of safety issue. After all I am a just a hobbyist, not an arsonist. Then I searched online and found a product that matches my needs, IoT High Power Realy. It is an extension cord with 4 power outlets, among which three of them can be programmed. One of the limits of the relay is that all three programmable ports are controlled by a single bit. But for a simple lamp control, it is enough.

The hookup is very easy. First assemble the shield to the Arduino UNO. Then connect Pin 13 and GND to the digital Input of the relay. The reason to use Pin 13 is because Pin 13 also connect the built-in LED. The LED can serve as a indicator light. Use a power adapter to provide 9V to Arduino.

Wire connection between the Arduino and relay

The last thing is to define the buttons in the ELEGOO BLE TOOL app. After installing the app, and enable the Bluetooth function in my iPhone. I click "connect" on the left top corner to let the software scan Bluetooth device. Connect the device HC-08. Then in the keyboard panel, keep pressing the blank button to define the function and message of the button. You can define whatever message you want to use, but it should be a single character. I use "k" as the message to turn on the switch, and "g" as the message to turn off the switch.

How to define the panels in the app.

Now you can use the app to control your lamp.