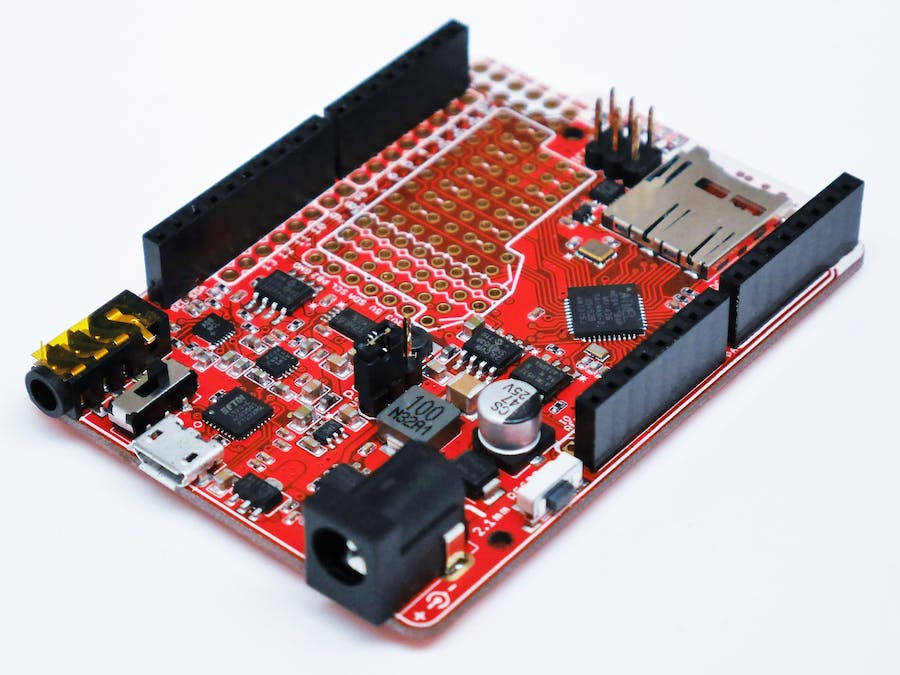 The goal of the Goldilocks Analogue is to bring a sophisticated analogue audio and process control input, output and storage capability to the Arduino environment.

Now for Sale on Tindie.

For Sale on Tindie

Some example projects have been implemented already including a triple oscillator digital synthesizer, a digital walkie-talkie, and many further projects such as talking clocks, sound sensing alarm systems, and Internet connected baby monitors are easy to build.

I love to prank my dog by recording him into a long audio delay loop; playing back his own barking 15 seconds later drives him crazy!

Using the smartphone compatible 3.5mm socket, a microphone input and headphone outputs can connect your sounds into the Arduino world. Samples of sound can be played back from on-board SRAM, or recorded on to the EEPROM to be recovered later. Up to a minute of telephone quality audio can be stored (less for higher quality), or played back using the on-board chip storage. The MicroSD card can store and play back hours of audio if desired.

To make all of this analogue power easy to use, the Goldilocks Analogue is fully supported by the Visuino IDE for drag and drop patch-panel signal programming. One licence for Visuino will be included for each board. If you are not keen on programming all of the libraries, drivers, and configurations, then Visuino will allow you to connect the dots with visual signal flows, and use the Goldilocks Analogue without writing a line of code.

16 projects • 92 followers
You can flog a dead horse to water, but the grass is always greener on the flip side.
ContactContact
Thanks to Boian Mitov.